I thought I would share some pictures of Historic Old Saint Augustine and some excepts from Wikepedia:
St. Augustine (Spanish: San Agustín) is a city in the northeastern region of the U.S. state of Florida, and the county seat of St. Johns County.[4] Founded in September 1565 by Spanish explorer and admiral Pedro Menéndez de Avilés, it is the oldest continuously occupied European-established city and port in the continental United States.[5] St. Augustine lies in a region of Florida known as "The First Coast", which extends from Amelia Island in the north to Jacksonville, St. Augustine, and Palm Coastin the south. According to the 2010 census, the city population was 12,975.[3] St. Augustine is the headquarters for the Florida National Guard.

The vicinity of St. Augustine was first explored in 1513 by Spanish explorer and governor ofPuerto Rico, Juan Ponce de León, who claimed the region for the Spanish crown.[6] Prior to the founding of St. Augustine in 1565, several earlier attempts at European colonization in what is now Florida were made by both Spain and France, but all failed

The Bridge of Lions is a bascule bridge that spans the Intracoastal Waterway in St. Augustine, Florida. A part of State Road A1A, it connects downtown St. Augustine to Anastasia Island.
A pair of Medici lions made of marble guard the bridge, begun in 1925 and completed in 1927 across Matanzas Bay. The lions were removed in February 2005 and returned in March 2011. 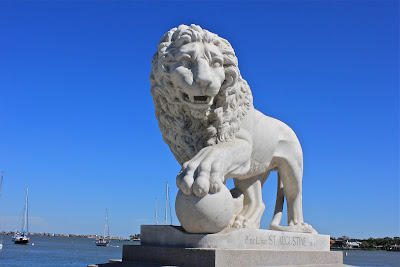 The man considered the "Father of the Bridge of Lions" was Henry Rodenbaugh, the vice president and bridge expert for Henry Flagler's Florida East Coast Railway. In the early 1920s he organized the bond issue to finance the new bridge, selected engineer J. E. Greiner to design it—and had his young daughter Jean pour the first bucket of concrete when the work began in 1925. Its construction came at the height of the extravagant Florida Land Boom of the 1920s, and the bridge is one of its greatest landmarks. It was designed not merely to carry cars, but to be a work of art, and it cost ten times as much as more prosaic bridges constructed nearby at the same time. It was completed after the land boom busted, and the 1927 dedication ceremony had to be paired with the annual Ponce de Leon Celebration in cash-strapped St. Augustine
The Bridge of Lions is listed on the National Register of Historic Places and was included by the National Trust for Historic Preservation (NTHP) on its list of the "11 Most Endangered Historic Sites" in the nation for 1997. The Bridge of Lions was later featured on the cover of the Trust's 1999 engagement calendar.
From its earliest days, it was hailed as "The Most Beautiful Bridge in Dixie."[3] It has long been a symbol of the nation's oldest city.
It gets its name from two Carrara marble Medici lions statues that are copies of those found in the Loggia dei Lanzi in Florence, Italy. The statues were a gift of Dr. Andrew Anderson (1839–1924), the builder of the Markland House, who spent the last decade of his life putting works of art in public places in the Ancient City. The statues were his last gift, and he did not live long enough to see them installed. He had them made by the Romanelli Studios in Florence, Italy, which a decade earlier had provided him with smaller versions which he displayed on the front steps at Markland. Lions are a symbol of the Spanish royal family, harkening back to St. Augustine's past as a Spanish colony
Renovation work was completed on March 17, 2010 when it reopened for use.[8] Following the removal of the temporary bridge (to an offshore reef), and landscaping, the restored Lion statures were returned after a 6 year absence, early in the morning of March 15, 2011,[9] principally completing the bridge renovation project.


The Cathedral Basilica of St. Augustine is a historic cathedral in St. Augustine, Florida and the seat of the Catholic Bishop of St. Augustine. It is located at Cathedral Street between Charlotte and St. George Streets. Constructed over five years (1793–1797),[3][4]it was designated a U.S. National Historic Landmark on April 15, 1970.

Sixteenth-century Aviles Street, is billed as the nation's oldest public street. The street is listed on the city's town plan of 1573. 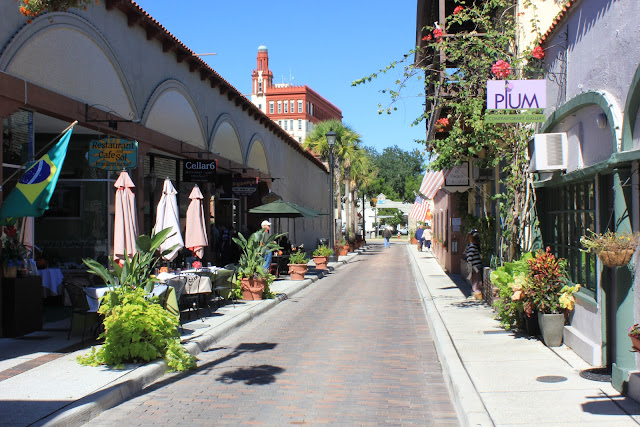 The street is full of restaurants and shops and is the host to many festivals, the most notable being the Fiesta de Aviles.


Flagler College is a private four-year liberal arts college in St. Augustine, Florida, United States. It celebrated its 40th anniversary in 2008.[2]
The Princeton Review ranks Flagler in the top tier of southeastern colleges,[7] and its campus as one of the most beautiful in theUnited States.[8] It is currently included in The Princeton Review's Best 366 Colleges Rankings.[9]

The college has been named in recent years by US News & World Report as one of the southeast region's best comprehensive liberal arts colleges,[3] and is included on its list of "America's Best Colleges".[4]
The school is located on 19 acres (77,000 m2), the centerpiece of which is the Ponce de Leon Hall, built in 1888 as a luxury hotel. The architects were John Carrere and Thomas Hastings, working for Henry Morrison Flagler, the industrialist, oil magnate and railroad pioneer. It is now listed on the National Register of Historic Places.

I hoped you enjoyed this brief yet incomplete history of Saint Augustine. I wanted to just focus on some of the pictures that I had captured during a late morning stroll after breakfast on Joyce's Birthday. Saint Augustine, is rich in beauty and history that spans centuries. There is so much to see and do in this magnificent city on the First Coast. It is well worth a visit.

Posted by Darren and Joyce Romero at 9:42 AM 4 comments: