August 2, 2010.
The last couple days, we were besieged with rain and thus, stayed around the campground. Needless to say, we developed a good case of cabin fever. So, today we took a drive out to Moab, Ut. @ 100 miles round trip. On the way we stopped at Hole N' The Rock off hwy 191. 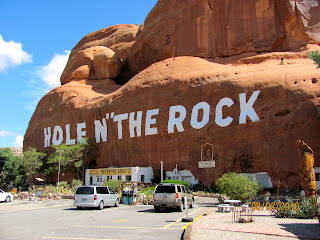 It's conveniently located about half way between where we are staying in Monticello and Moab. It's a cute little tourist stop with at least three souvenir shops and lots of interesting things to see. 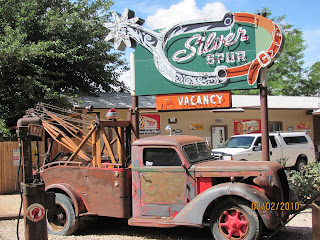 Joyce posed in front of a bull, one of many art statutes in the yard. 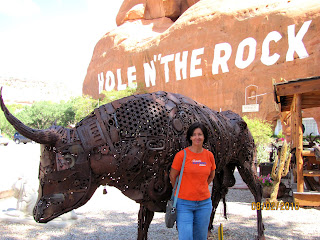 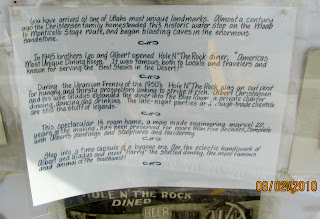 We parked downtown in Moab and walked around the town. You can see our truck parked along the side of the road in the picture below. We took the truck because we've put almost 2400 miles on the Jeep since buying it in June. 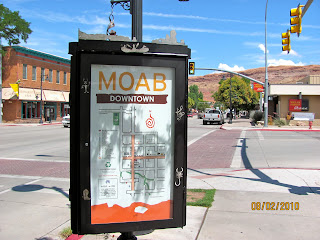 Moab is a an interesting, modern town that obviously thrives on tourism. There are a plethora of souvenir and T-shirt shops along Main Street. 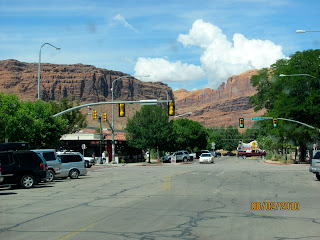 The temperature in Moab was pushing 90 +. In comparison it was in the upper 70's when we left Monticello. We visited the visitor center and could over hear the employees warning visitors of the dangers associated with heat from hiking and biking during this time of the year out on the many trails. Afterwards Joyce and I discussed it and we decided that we would likely return to Moab in the late winter or early spring months to take advantage of the excellent hiking and biking opportunities. 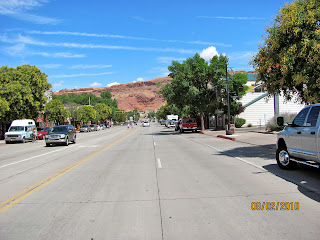 We strolled the shops along Main Street and then stopped at a local cafe for lunch. By the time we were ready to head home, the storm clouds had built up to the south in the direction we would be headed. 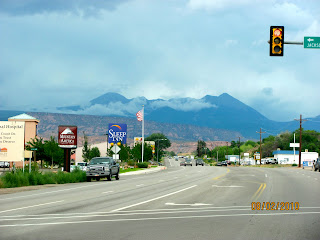 I loved the silhouette of the mountains to the west of Moab. 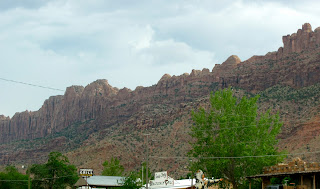 Fortunately, most of the rain moved off as we drove south. We pulled off Hwy. 191 to photograph the Wilson Arch on the way home.
Wilson Arch, also known as Wilson's Arch, is a natural sandstone arch in southeastern Utah along U.S. Route 191 located 24 miles south of Moab. It has a span of 91 feet and height of 46 feet.[1] It is visible from the road to the east where there are turnouts with interpretive signs. The elevation of Wilson Arch is about 6150 ft.[2]
According to the sign at the pulloff near the arch:

"Wilson Arch was named after Joe Wilson, a local pioneer who had a cabin nearby in Dry Valley. This formation is known as Entrada Sandstone. Over time superficial cracks, joints, and folds of these layers were saturated with water. Ice formed in the fissures, melted under extreme desert heat, and winds cleaned out the loose particles. A series of free-standing fins remained. Wind and water attacked these fins until, in some, cementing material gave way and chunks of rock tumbled out. Many damaged fins collapsed like the one to the right of Wilson Arch. Others, with the right degree of hardness survived despite their missing middles like Wilson Arch."[3] 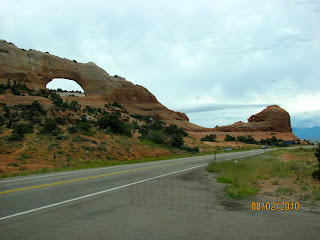 Back home we made some final preparations to move on tomorrow.
Posted by Darren and Joyce Romero at 8:44 PM