Pictures of the Refuge and Dealing with the extreme heat 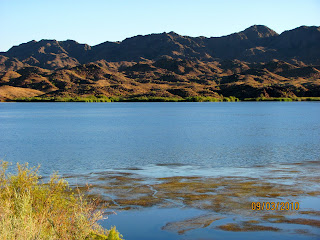 We’ve been enjoying our time off the last couple of days. However, it’s been hotter than Hades! 114 yesterday and 111 today! When it’s over 110 the deference of a few degrees is indistinguishable. With both A/Cs running we are able to keep the main area of the RV at a comfortable 77-78 during the hottest time of the day. Actually the bedroom we can keep much cooler and typically it is 72 degrees.
Yesterday I took some pictures around the facility. However, our Verizon internet coverage is very poor here. Apparently, Verizon piggybacks with other service providers and does not have their own towers in this area so it's often impossible to get on the internet with our MiFI. When we are able to get on, it often runs very slow. So, I'll come back and post the pictures when I have a speedy connection. 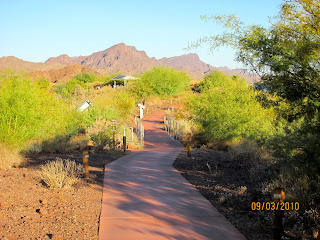 The Peninsula Trail leading to the two .. 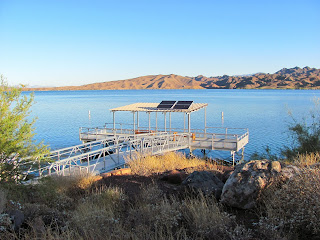 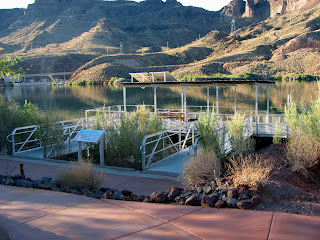 In the afternoon, we drove into Parker, Az about 17 miles south of us. We crossed the Colorado River and for a few moments we were in California before turning around and heading back. We did some minor shopping and then checked out the Blue Water Casino in Parker. It’s a very basic looking smaller casino with a couple of restaurants. No where near the size and majesty of some of the other tribal nation casinos we have seen or as opulent as those in Biloxi, MS.
We Left Parker and drove in to Lake Havasu to catch the movie Piranha 3D. The movie was filmed on Lake Havasu. In the movie they call it Lake Victoria. The movie was a bit of a sci-fi gory film coupled with a Girls Gone Wild atmosphere. The scenery and shots of the lake are spot on.
Today we watched as much of the UF vs. Miami (Ohio) game as we could stomach before heading into Lake Havasu City. The Gators were playing awful..we hope it’s just opening season jitters. We killed some time in Lake Havasu City visiting Walmart and driving around the city. We weren’t in a hurry to return home where we would need to sit inside due to the extreme heat and the official “extreme heat warning” from the National Weather Service. Tomorrow is expected to be much of the same with a cooling trend by mid week.
While driving around we could see that lots of people were enjoying themselves on their boats out on Lake Havasu. There are some beautiful speed boats around here. Back at the refuge we’ve seen a couple of vehicles drive in and drive out. Not exactly busy!
Posted by Darren and Joyce Romero at 8:03 AM