May 17, 2011
A few days ago, Les and Sheri, the owners of Cottonwood Creek RV Park invited Joyce and I to go kayaking with them and their good friend Steve. Les and his friend Steve are both getting into kayaking and have been going to demo events to test out different kayaks before buying. Their main interest is in finding a kayak suitable for fishing. They had narrowed their decision down to two Kayaks, both of which they intended to rent and tryout for the day.
Monday, Les, Steve and I traveled to Austin to rent 4 kayaks for the 5 of us. Joyce and I would be using a Wilderness Systems Tarpon 130T Tandem Sit-On-Top Kayak. Although we have our own inflatable Sea Eagle Tandem Kayak, our hosts wanted us to try the "sit on top kayak". So, we loaded the four kayaks on a trailer and brought them to the park.


The next day we got up early and all went to breakfast at 8:00 in Dripping Springs in preparation to kayak The San Marcos River. After breakfast, we drove to the City of San Marcos' city park.


The San Marcos River bubbles to life from the San Marcos Springs at Aquarena Center (formerly Aquarena Springs) on the campus of Texas State University (formerly Southwest Texas State University) in Hays County and flows about 85.5 miles through Guadalupe and Caldwell Counties to the confluence of the Guadalupe River in Gonzales County. In practical terms, recreational use of the river is usually limited to about the upper 16.5 miles between Old City Park in San Marcos down to FM 1977, just above Staples Dam, but can be paddled all the way to the Guadalupe River. The river has many dams and low-water bridges that must be portaged, coupled with rough terrain, making casual recreational paddling for less experienced boaters not all that much fun and more than a little dangerous. However, experience paddlers capable of recognizing and avoiding hazards can paddle the entire river to Luling and beyond.
At the city park we unloaded the kayaks. The City Park is just yards away from the campus of Texas State University. Steve and the girls prepared the kayaks as Les and I drove to the take out point to leave the truck and trailer. I then drove us both back to the park in our Jeep.
It didn't take long for Les (L) and Steve (R) below to get settled into their kayaks ready to row! 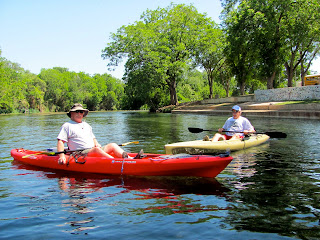 Below, Sheri kicked off heading down stream in the pristine clear spring fed river.
The San Marcos River, Known as the "River of the Innocents" to the Spanish Monks who "discovered" her, the San Marcos is one of the largest spring fed rivers in Texas. Average flow at the headwaters (known as the Aquarena Springs) is 130 cubic feet per second, and even during the driest of summers there has always been sufficient water for canoeing and other water sports. It is recognized as one of the most unique ecosystems in the world, with several endangered species living in its cool, 72 degree waters 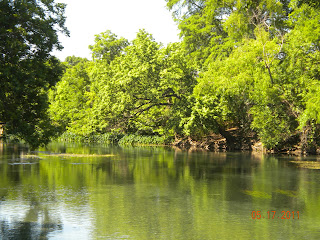 We started out crossing under a number of bridges for pedestrians, rail and vehicles. 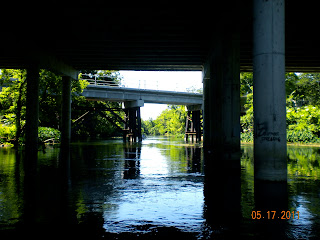 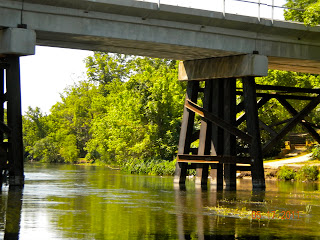 The small bridge below required us to be a little flexible and flatten our bodies to get underneath. Sheri ended up taking a spill as her kayak rolled just after coming under the bridge. The other option would have been to portage around. 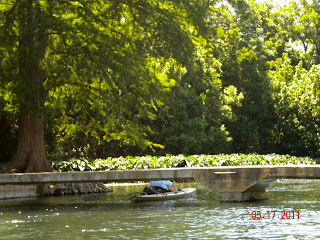 We arrived at Rio Vista Falls which is a series of three spillway dams. With potentially 4 kayaks to portage some distance over rocks to get around the dams, Les and I decided to try and kayak at least two of the boats through the white water. So, I watched as Les successfully made it through the white water in his kayak. I then got into Sheri's single man kayak and tried my luck in the white water.
I got dumped out of the kayak at the first falls losing my sunglasses. Fortunately the water was cool and refreshing but moving at a pretty good clip which made it difficult to stand. 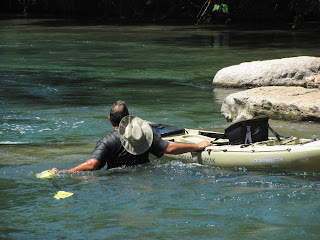 I tried again with the other falls and was quickly dumped as I wasn't able to get balanced and straight before the river current swept me over the next whitewater falls.

So after my splashing good time at Rio Vista Falls, I got out of the river and helped to portage the other 2 kayaks around the falls. Joyce and I then got back into the tandem kayak at the base of the third spillway. Well guess what? We both rolled over in the tandem kayak after kicking off from shore. The current was too strong and it hit us broadside rolling the kayak. After collecting our gear we got going again. However we weren't going along very far before the swift current pushed us into a tree trunk in the river that we didn't see and again we flipped! Thankfully we were pushed into a shallow sandbar and we were able to collect ourselves and gear before trying it again!
Further down the river, we came to another 4-5 foot falls that we had to portage. At that point it was convenient to go ahead and eat our lunch. 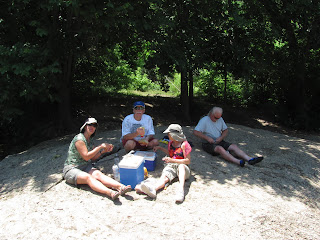 We ended up having to portage on at least one or two other locations as we continued down stream. At one of the portage locations we had to lower our 4 kayaks over and down a wall about 15 ft. Fortunately we had rope to hold and lower the kayaks.
I was surprised at the speed of the current in some areas of the river. The strong current coupled with the twisty narrow nature of the river and sunken trees made it tricky at times to control the tandem kayak. 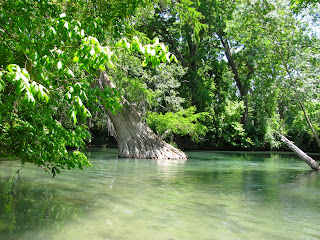 We had to be constantly alert for trees in and below the surface of the river as well as large rocks and sandbars. We came across several trees that had fallen across the river almost blocking passage. We depended on Steve and Les to find a safe route as our tandem kayak was harder to maneuver and drafted lower in the water. We saw lots of river turtles and even fish in the clear water.
After about 6 hours and maybe 10 miles on the water, we made it to the take-out at San Marcos River Retreat! We were all spent but we had a blast! We loaded up and were on our way home by 5:30. We were scheduled to return the kayaks to Austin before 6:00. We had thought we would be off the river by 3:00. Obviously that didn't happen, you know the saying,"time flies when you're having fun!" Hope they don't charge us for another day!
Joyce's camera got wet today so we will have to let it dry and see if it survives. I kept mine in a ziplock bag and it stayed dry. I didn't take as many pictures as I would have liked due to my inability to get to it fast and then secure it while negotiating hazards. My G'zone phone got soaked but it's waterproof and survived!
As far as my opinion of the "sit on top kayak"... I think our inflatable Sea Eagle would have been more maneuverable. We've never flipped in ours! However, there were some serious tree branches, rocks and rock shoals that we scrapped against or over that might have been damaging to our inflatable! Steve and Les had been especially careful with the new kayak they were testing and still they managed to scrape up the bottom. I'm sure we would have come close to puncturing our inflatable.
I'm convinced that tandem kayaks are just not very maneuverable no matter what the style unless perhaps you have very experienced paddlers.
If you ever get the opportunity to kayak on the San Marcos, be prepared for more than a leisurely float but, it's worth the trip!
Posted by Darren and Joyce Romero at 8:00 AM