Touring the Panhandle via US 98 and Panacea, Fl.

October 13, 2009.  We were scheduled to meet up with George and Bonnie back at their ranch on Oct. 16th. A few days later we would be traveling together to Moultrie Georgia for the Southeast Sunbelt Agricultural Expo.

We decided to take the scenic route east along the panhandle on US98.  I had yet to fill-up on diesel with the rig attached and in order to avoid it, I carried two 5gal. diesel fuel containers just in case my 36 gal. tank in the truck were to get dangerously low.  The extra 10 gal. gave us depending on driving conditions, an additional 100 mile range.  The stop and go traffic through Panama City took a toll on my fuel mileage. Fortunately, I found a fuel station in Mexico Beach that I could pull into with the rig and thus completed my first fill-up with the rig attached! Even though I had just over a half tank, it proved to be good timing as diesel stations seemed to be few and far between along US98.  Just outside of Mexico Beach we stopped just off the highway along the shore.  The sand and beaches were just as beautiful as I had remembered. 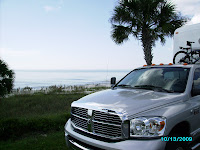 We planned to stop somewhere in the Big Bend area of Florida, about halfway to George and Bonnie's in Bronson, Fl.  However, my research on campgrounds had not yielded a lot of desireable campgrounds.  However, I had one possibility in mind in Panacea, Florida; Holiday Campground.  Upon arrival, I immediately noted that the grounds didn't closely match the website photos!  The RV park was very dated and had a lot of full time residents.  However, the beachside (read more expensive) sites were acceptable.  With few other options, we decided to stay for three days.  Once parked and situated, the views of Ochlockonee Bay at the Gulf of Mexico out the rear windows were fantastic. 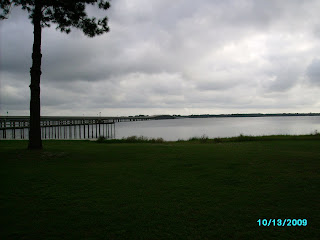 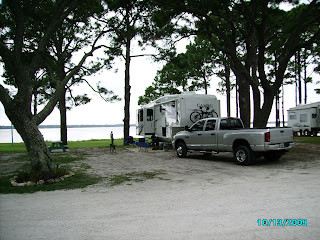 During our stay, we experienced mostly cloudy rainy weather, however we were able to work in a good bike ride.  We couldn't help but notice how almost every other home in the area was "for sale".  It was apparent the area    was suffering from the economic down turn and housing bust.
Posted by Darren and Joyce Romero at 7:51 PM

Email ThisBlogThis!Share to TwitterShare to FacebookShare to Pinterest
Labels: Campsites