July 2, 2010.
Another beautiful day in the Colorado Rockies. Temps overnight were not as cool. It was expected to be 90 today. But no worries, we were all taking the Cog Train to the summit of Pikes Peak today. It should be about 40 degrees cooler on the top of the mountain. The most visited mountain in North America and the second most visited mountain in the world behind Japan's Mount Fuji, Pikes Peak forms a stunning backdrop for Colorado Springs and the Garden of the Gods. At an altitude of 14,110 feet above sea level, Pikes Peak is the 31st highest peak out of 54 Colorado peaks. It is the farthest east of the big peaks in the Rocky Mountain chain, which contributed to its early fame among explorers, pioneers and immigrants and made it the symbol of the 1859 Gold Rush to Colorado with the slogan, "Pikes Peak or Bust" 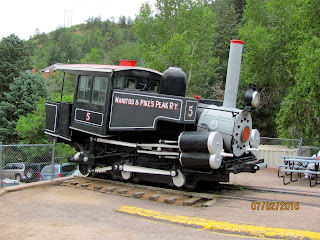 We started the day with breakfast at the Air Force Academy Golf Course. We then drove to the Cog Train Station in Manitou Springs, Co. on the outskirts of Colorado Springs.  We had reservations for all  of us to take the 12:00 train but my sister’s family was running late. So we waited till they arrived and booked passage on the 1:20 train. 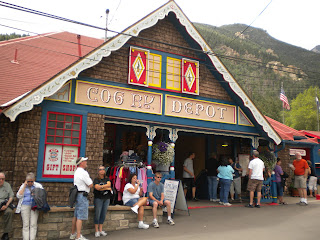 It’s about an hour and a half trip up the mountain in the Cog Train. We started out in a lush pine forest and as we got to about 10K feet the trees thinned out to nothing but alpine tundra. 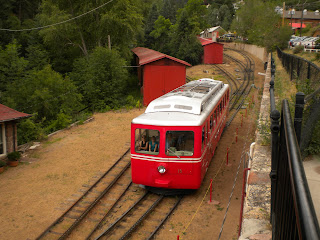 Before long, we were on top of Pikes Peak. On top there is a concession stand and restaurant as well as observation decks. 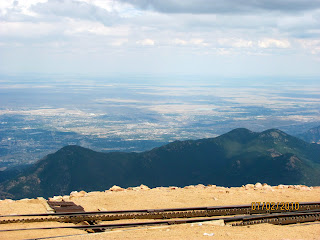 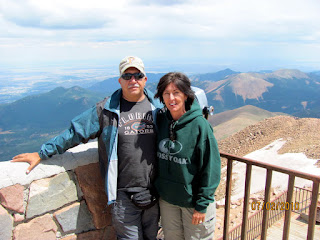 There’s also a large dirt parking lot to accommodate the visitors that chose to drive up.
The scenery was beautiful even though it was cloudy and raining in spots, so the views weren’t as clear as they could have been. 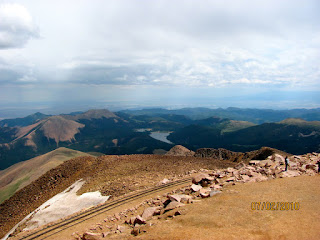 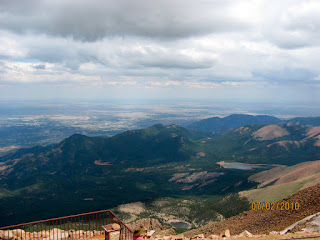 The temperature was about 40 degrees cooler, probably upper 40’s or low 50’s. It was nice and cool! 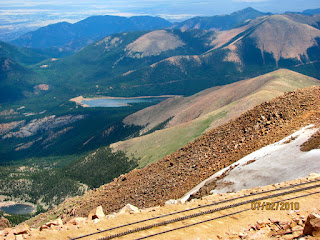 We had about 40 minutes on top of Pikes Peak before we had to again board the train for the long trip back. But not before we took the obligatory photo ops. 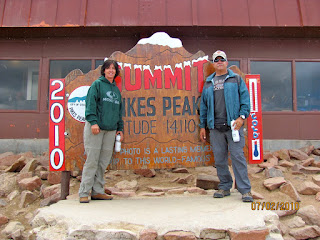 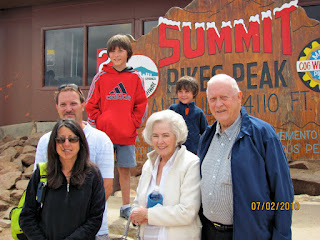 On the way back down the mountain, we spotted some Big Horn Sheep. I enlarged the photo to see the sheep. 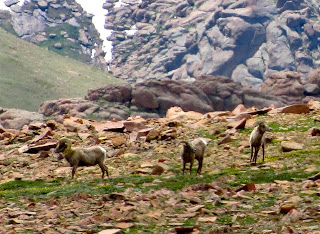 It’s not a cheap excursion at $33 per adult. It was an okay trip. I’m not fond of being packed into seats like a herd of cattle. 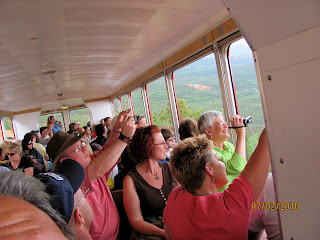 I would have preferred to drive up and save the $66 if I had the option. I caught this shot of the road as we passed it on the train. We could see trucks and cars on the road as we crawled up on the train.The 19-mile Pikes Peak Highway, paved part of the way, is open year round, weather permitting 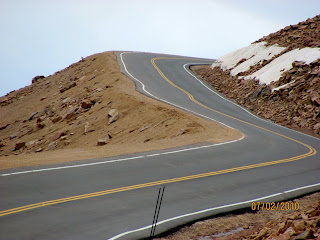 On the way home we stopped for pizza at a local restaurant. We slept good that night!
Posted by Darren and Joyce Romero at 9:27 PM