August 17, 2010.
We are continuing to have mild weather. It's been cooler the last few days and the monsoon season is back. Big clouds roll in during they day and we sometimes get some rain. Best of all, it's kept the highs in the upper 70's.
Today we took a ride out to Sedona, Az. just over a hundred miles round trip. 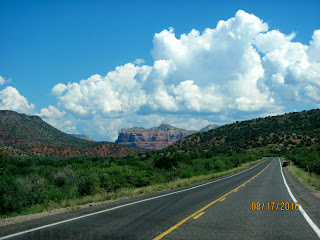 We should have been on Highway 89A heading south out of Flagstaff. But I didn't pay attention to the map thinking I could get to Sedona off I-17. However, after more than 50 miles on I-17 I hadn't seen a sign for Sedona, so it was time to break out the map. We made it to an exit which put us south of Sedona and thus we headed north on 179 from I-17 towards Sedona enjoying the beautiful red rock mesas. 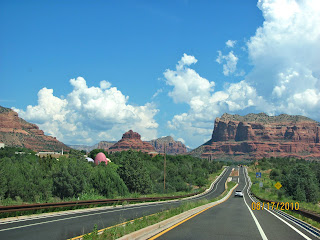 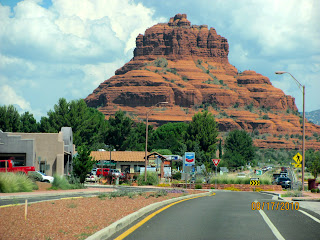 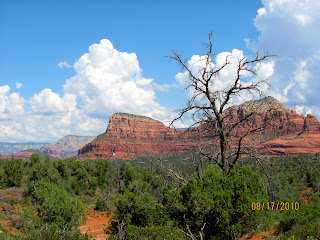 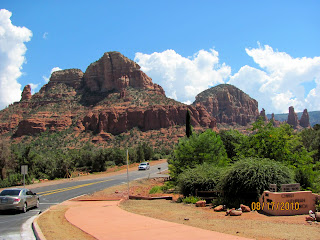 Notice the homes nestled in the hills. 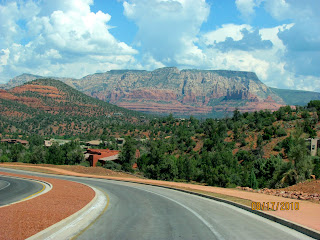 Sedona is located in the Upper Sonoran Desert of northern Arizona. At an elevation of 4,500 feet (1,372 m), Sedona has mild winters and summers. 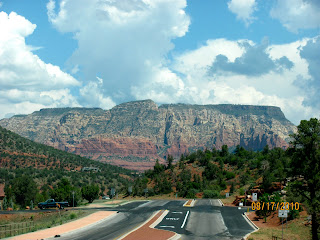 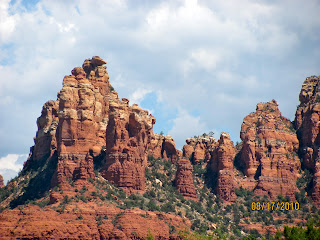 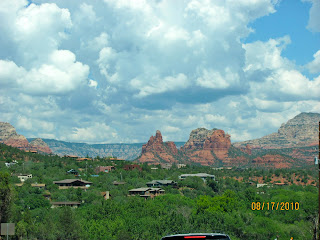 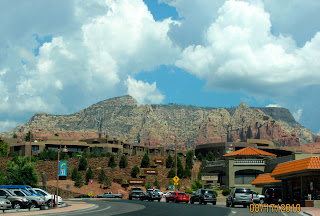 Sedona began to develop as a tourist destination, vacation-home and retirement center in the 1950s. Most of the development seen today was constructed in the 1980s and 1990s. As of 2007, there are no large tracts of undeveloped land remaining. 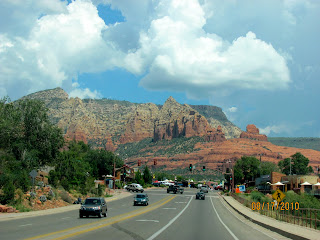 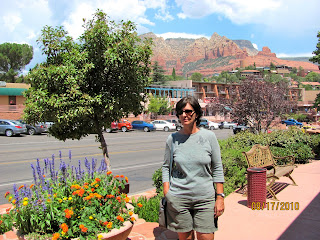 It's obvious that Sedona is a tourist town. The Main Street (89A) is lined on both sides with restaurants, T-shirt shops and Jeep tours. 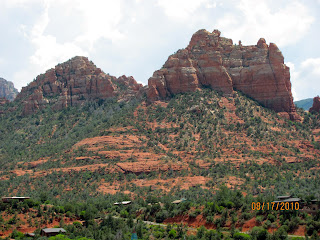 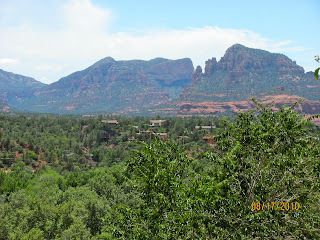 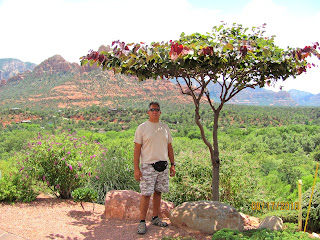 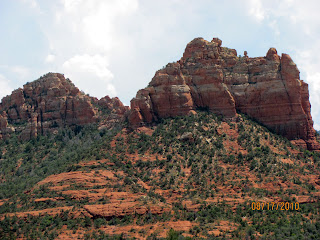 We had lunch at a local Mexican restaurant and watched through the large windows as the storm clouds rolled in. The waitress made mention of flash flood warnings out of Flagstaff. 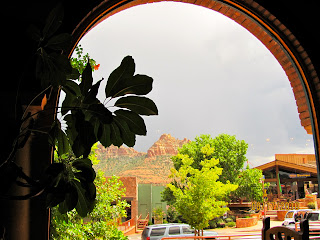 We had traveled in the truck as I hadn't driven it for over a week. It began to rain as we headed north on 89A towards Flagstaff. The rode was narrow and winding through a canyon. I was beginning to regret not having taken the Jeep because of the narrow twisting canyon road. However, it was very beautiful especially when we could see the water falling off the canyon walls. Unfortunately, the water often ran into the road creating potential flash flooding and falling rock conditions. We weren't able to take pictures do to the rain. Before long we came across some ascending switchbacks. After gaining altitude the rain began to subside as we drove through a pine forest that was littered with hail on the ground so thick it looked like snow. I'm glad we didn't drive into the hail as it was falling! The rest of the ride home was uneventful with sporadic rain showers.
Sedona is worth checking out if you're in the area. There are a number of hiking opportunities just off the highway. We had hoped to take advantage of one in a slot canyon, but were thwarted by the rain and lightning.
Posted by Darren and Joyce Romero at 10:04 PM