Last Saturday, Joyce and I took another ride out to Bull Head City with the excuse that we wanted to go to the Sam's Club store. Actually we just wanted to get out for a ride. While passing through Lake Havasu City we came across a car show at the local Dodge dealership, Anderson Dodge. 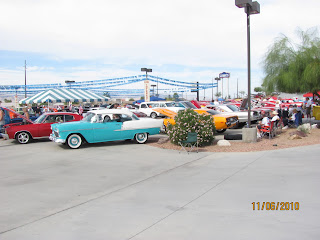 There were a number of beautifully restored cars and trucks. 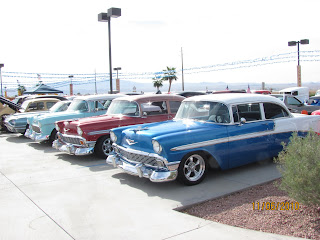 Some of the older muscle era cars were matched with their new counterparts. 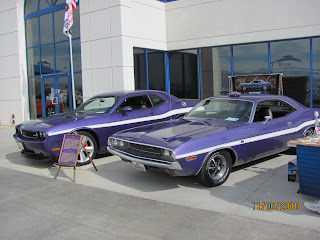 After stopping for the car show, we continued on to Bull Head City and visited the Sam's Club store making only a few minor purchases. The 180 mile round trip was surely a boondoggle. However, we enjoyed the ride.
Sunday was the first day back in our 3-day work schedule. We had a short visit with a couple of full time RV'ers that stumbled across our blog while doing research for hiking in the Lake Havasu area. Gail and Jim also write a blog Life's Little Adventures. They have been full timers for two years. Debbie, another full timer was traveling with Gail and Jim. It's always nice to meet others enjoying our lifestyle. We wished they could have stayed around longer but they had plans to move on the next day.
One of the downsides to volunteering and living on-site is the lack of interaction with other RV folks. However, we can't complain too loud as we enjoy the staff and our site with it's magnificent views. After talking with Gail and Debbie, it kinda made us yearn to hit the road. No doubt, we will be ready to go at the first of the year if not a week or two sooner.
Monday we did our daily trail and fishing pier maintenance chores and then went with Stan, the assistant refuge manager to pick up some very heavy 4ft x 4ft heavy gauge steel support racks that he had ordered to be custom made in Lake Havasu City. We pulled the flat bed trailer behind his truck. With the help of the welder, we loaded up the four rather oily custom steel racks. We then drove back past the refuge and transported the four racks over the Parker Dam into California to the U.S. Fisheries storage lot. This was a trick as the dam doesn't allow trailers across... unless it's a government trailer. We just barely squeezed through the barriers on the sidewalls of the trailer tires. After unloading the steel racks, I learned they would be used to store heavy rusty steel posts in the open storage yard. Posts that are currently stacked on the ground. I guess they will look prettier on those expensive racks ($1600+). Fortunately another set of Fisheries volunteers will do the stacking.
After driving back to the refuge, Stan and I unhitched the flatbed trailer. Joyce and I decided to take the truck and make our second trip out to Mineral Wash part of which is located within the Bill Williams River National Wildlife Refuge. 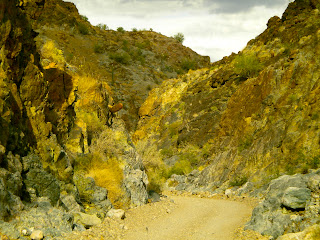 Mineral Wash is located about 60 miles one way from our refuge site. Once we get into the wash area it's posted as a primitive 4 wheel drive road. 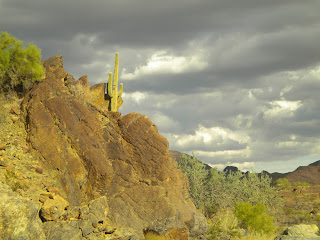 There were some clouds rolling in and Joyce was a little concerned as we were of course driving in a wash! 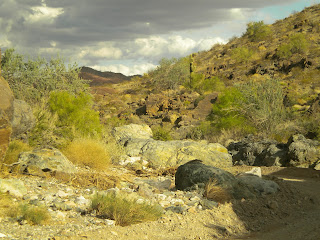 Rain was not forecasted and the clouds didn't look very thick. In the picture below the road drops dramatically into the wash. 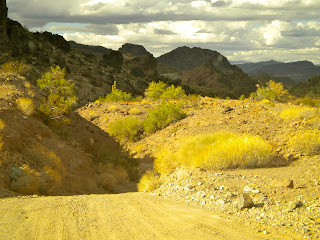 It's a beautiful but long and dusty drive. 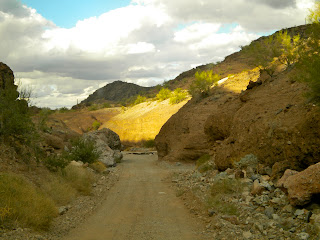 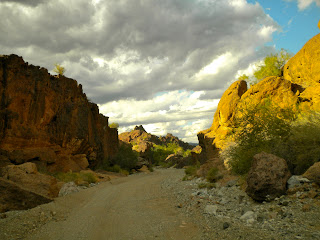 During periods of unusual rainfall and flooding this area is a riverbed. 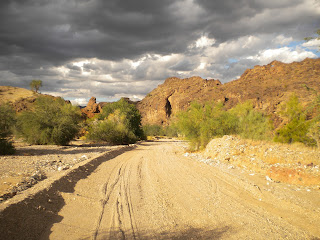 Once we got out there, Joyce cleaned and rearranged the materials in the only signboard kiosk for this part of the refuge. 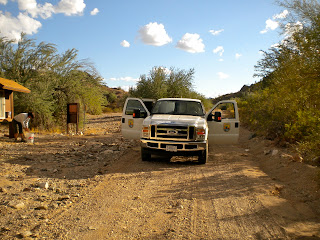 Yesterday (Tuesday) we woke to surprisingly cool temperatures. We pressure cleaned the two fishing piers just in time as the fisherman were arriving wanting to use the piers. Later we took the vehicle pictured above into Lake Havasu City to have it detailed and the oil changed.
We will see what the next few days bring!
Posted by Darren and Joyce Romero at 4:38 PM