Replacing the Sewer Hose and Other Fine Chores

November 30, 2010. Bill Williams NWR
We are beginning to get the hitch itch. We have about 3 more weeks here at the refuge as we are tentatively planning to leave a little early before Christmas. You may recall that we arrived here a month early at the end of August. When we arrived we were told that if we completed 500 hrs. of volunteer work we would get a National Parks Pass good for a year. We are over that mark so we are looking forward to that reward.
Yesterday, I received a new sewer hose that I had ordered from Drain Master. Our Carriage Cameo came with a cam fit sewer hose system made by Drain Master. The system uses cam fittings instead of the typical bayonet fittings. New this year is a Polychute hose that is supposed to be nearly indestructible. It has a clear tube portion next to the unique nozzle for monitoring the flow when dumping the tanks (isn't that exciting)! The hose can be sealed at both ends for storage with the valve lever on one end and a red cap at the other. The new hose is 16 ft. long when stretched. I've never needed anything longer than that. The hose complete with fittings cost $150! It better outlast the other one! 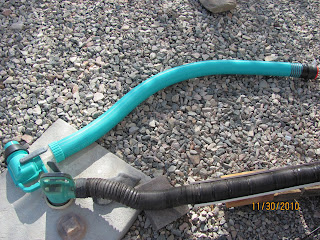 I ordered the new hose because the previous one has suffered in the heat and sun. The old hose and nozzle fitting got constant exposure to the sun during the day which discolored it to a burnt shade. 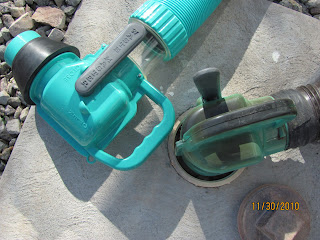 In addition the hose itself developed small holes on the top either from the sun or from critters chewing on it. 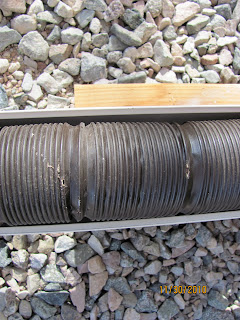 I'm going to continue to use the old hose till we leave as it is not leaking on the ground and I don't want to risk exposing my new hose system to whatever created the holes! The new one fits nicely in the sewer hose compartment bay on the side of our Cameo. 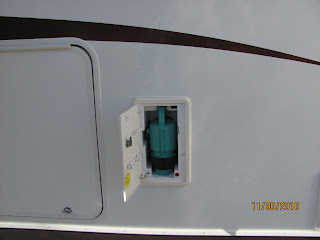 Today was our day off so I got to work installing the hinges and cabinet supports in the rig that I had wrote about a few days ago. I've also begun waxing the rig in sections and making small preparations to depart such as emptying and flushing the water tank.
New neighbors arrived today. They will be doing volunteer work for the refuge ecologist, counting birds, plants etc. 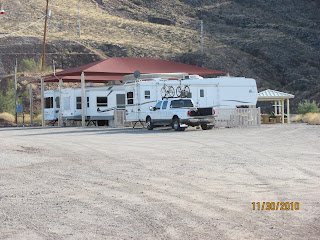 We have the next two days off. We are currently thinking of doing a hike but we'll see what happens. It's been pretty cold with temps in the upper 30's in the morning and a high in the 50's today. It's not bad in the sun as long as the wind isn't blowing.
Posted by Darren and Joyce Romero at 4:34 PM