Hike at First Water Trail Head in the Superstition Mountains

January 3, 2011 Usery Mountain Regional Park.
You may have noticed that we started a Facebook page for our blog. I'll be posting more pictures on the Facebook site as it's faster to load them. In addition there will be more timely short updates. Joyce will be helping me with monitoring the Facebook page. Please feel free to write on the wall. In the near future perhaps we will have some "Discussions" on the Facebook page as I become more familiar with it.
Well, today we were supposed to move campsites to be in compliance with the park's 14 day rule. We found a site we wanted and went to the gate house to register. Their information indicated the site would be vacated by noon so we paid for a week at the site.  So at some point we drove by the site to check on the status of the occupants to see if they were preparing to move. It turns out they had a new tag posted on their site indicating they wouldn't be leaving till 1-4-11.  Long story short, they had renewed via the "iron ranger" and after checking back with the registration desk we ended up staying in our current site at least till tomorrow. The volunteers running the registration desk were very apologetic for the mix-up. So tomorrow morning we will pull out to dump our tanks and move to another site.
So, with the morning shot, we decided to take an afternoon hike in the Superstition Mountains. We drove east through Apache Junction before turning Northeast on Hwy. 88. turning at a sign for First Water Trail Head on FR-78. 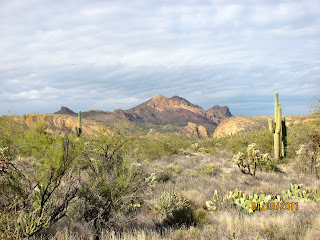 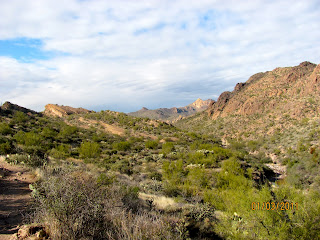 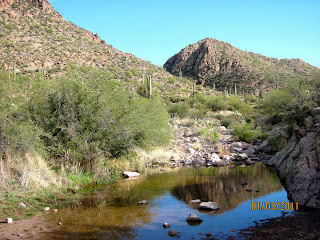 The trails were not very well marked and we didn't see any maps of the area at the trail head. By this point below, we were pretty much lost! 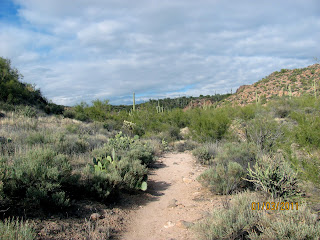 I had a compass and a general heading for the start of the trail head but that's it. And the general heading was over hill, mesa, stream and mountain. Not exactly a direct route. 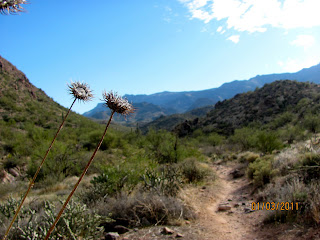 It was just after 3:00 so I knew we had a couple hours of daylight. However the low sun and the clouds made it seem later in the day. 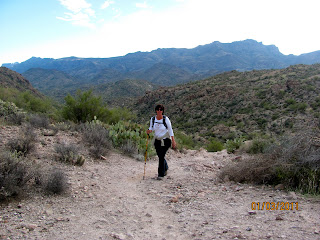 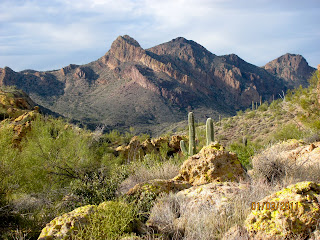 We decided to continue moving forward following a trail. A trail that seemed at times to be frequented by equestrians as evidenced by the occasional pile of horse manure. 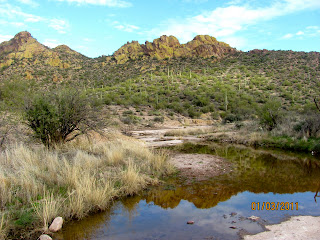 We seemed to pass over the same or similar creek beds along the trail as we were becoming increasingly uneasy about our apparent inability to find our way! Finally we saw what looked like a hut in the distance. We hiked toward it and what we thought was a hut was a tin roof covered stable. Thankfully there was a man and woman there who helped us with directions back to the trail head.
It turns out we had been within a couple miles of the trail head and once out of the valley they called "Second Water Valley". We were back on the dirt road FR-78 and had only a short hike to the end of the road and the trail head. We got back just short of 3 hours.
Back home, I did some "Google" searches and found this very good site of the trails: Hike Arizona. Best I could tell we did a version of the Hack Berry Spring Loop.
This hike has made us realize that really should carry a GPS or some type of directional finder other than a compass. It's rare that we ever have a map of the areas we hike. We took off on this trail cold without any information before hand. Perhaps not the best way to go!
Having said all that, It was a beautiful hike with lots of beautiful mountain scenery.
Posted by Darren and Joyce Romero at 8:47 PM