Visiting with Friends from our New Life Style

January 9, 2011 Usery Mountain Regional Park.
We took a short hike around the park showing off it's many varieties of cactus and the wonderful scenic vistas. Later we took a ride in the Jeep out towards the Superstition Mountains.  We took them down the dirt road to the First Water Trail Head, where we had previously done a hike. At the trail head we discovered the Maricopa County Sheriff's Office (MCSO) had a Search and Rescue Party that was apparently wrapping up their operation. I captured this picture of their helo taking off. 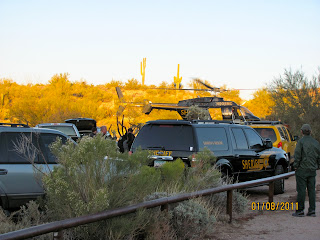 Today we learned that they had found the remains of lost hikers/ explorers. Ironically from the same area where we had nearly become lost.

Updated: Saturday, 08 Jan 2011, 5:27 PM MST
Published : Saturday, 08 Jan 2011, 4:31 PM MST
MESA - The Maricopa County Sherriff’s Office has found remains they believe are from two people in the Superstition Mountains Saturday afternoon.
The MCSO mountain rescue team and helicopter spent most of Saturday searching for the remains that were found by a man hiking on Friday night.
The man told MCSO that he thought they might belong to the three hikers from Utah who went missing in July, according to MCSO spokesman Jeff Sprong.
Sprong said officials will be checking to see if they are the remains of two of the hikers.
He said because of the conditions of the remains, the Medical Examiners Office will be trying to identify them. It was unknown how long it will take to identify the subjects.
Related Story:
Sheriff Ends Search for Missing Utah Hikers

After witnessing the activity at the trail head, we took a ride and stopped along the way to take photos of the Superstition Mountains.

We really enjoyed visiting with Dale and Betty and we sure hope to see them again sometime down the road. Who knows, maybe someday we will stop and visit them on their farm in Nebraska.
Today, we took a ride with my Father and Karen out to the Gold Canyon community to meet some of their friends and have lunch at the country club. We had a great time and enjoyed seeing the area and the company.

Posted by Darren and Joyce Romero at 7:45 PM