February 10, 2011. NAS Corpus Christi, Shields Park NAS Recreation Area.
We see a lot of the aircraft below flying and circling over the base and Corpus. Our son-in-law is currently training on this multi-engine aircraft for his multi-engine certification.

We got a bit of good news yesterday in that we were told we could keep our site till March 1st and thus, we won't have to move again. The last few days have seen a brief warming trend from the frigid arctic front that passed through here last week. However, the last couple of days brought another subfreezing front that literally blew through. Yesterday the winds were making it uncomfortable inside and outside. Wind chills were in the single digits. Our Carriage Cameo shook all day in the wind. I stayed home with the dogs as Joyce took Ashley shopping for her birthday. I noticed a lot of rigs had pulled their slides in, particularly those with slide awnings. Fortunately, our Carriage Cameo doesn't need or have slide awnings. In the campground wind gusts were up to 50 mph. In fact, the wind blew over my satellite dish that I had staked out on a tripod and weighted down with gallon water jugs. Later I discovered that the fall broke the LNB housing on the satellite dish.
Today was the start of the recovery from the cold temps but with subfreezing temps expected tonight. Our son-in-law didn't have any training scheduled for today, so we decided to take a trip to the Texas State Aquarium in downtown Corpus Christi hoping to stay indoors.
It cost about $15 each for admission with Ashley and Andrew (A2) enjoying a small military discount. Below A2 pose at a fountain by the entrance with the Harbor Bridge in the background. 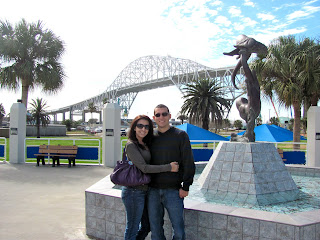 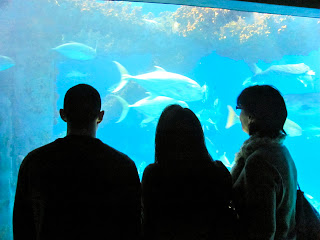 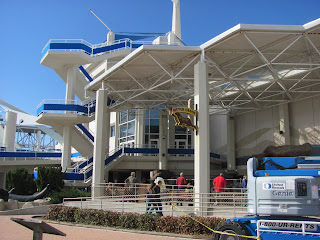 Outside at the rear of the aquarium Andrew took this picture of us with our daughter, Ashley. In the background is the USS Lexington. 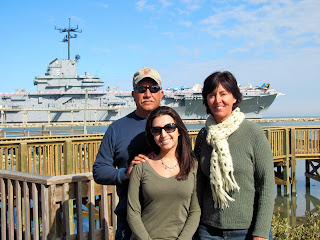 The aircraft carrier is now a museum. We plan to come back to this area and visit the popular war ship and take the self-guided tour.
My opinion of the aquarium is based on my comparison with the Florida Aquarium in Tampa. As I recall the Florida Aquarium was the same price with frequent discounts. The Texas State Aquarium pales in comparison to the Florida Aquarium in size, number of exhibits and grandeur. Thus jaded, I'm not sure if the Texas State Aquarium is worth the cost as we were in and out in about 1.5 hrs.
Back at home, I had called around trying to find a replacement satellite dish. I kept getting referred back to Dish customer service. Of course I kept getting connected to whom, I could only assume was a foreigner, who had as much trouble understanding me as I did them. They wanted to charge me $95 just to have a technician come out. I didn't need a technician, I know what the problem is, the broken LNB! After I managed to explain that their arrangement wasn't acceptable, I got across that all I wanted was a satellite dish that I could replace on my own. So they gave me a phone number to an installer 78 miles away! Dish customer service is really a disservice.
So I ended up gluing the broken LNB back together with superglue and put it back together on the satellite dish. Surprisingly, I got it to work. However, it may just be a temporary fix as the structural integrity of the LNB is weakened and the breaks held together with Gorilla glue.
I did find an installer in Corpus Christi who offered to sell me a used dish for $50. I may take him up on the offer.
Posted by Darren and Joyce Romero at 7:49 PM