February 22, 2011, Shields Park, NAS Recreation Area.
Yesterday, I went with my daughter, Ashley and son-in-law, Andrew for the self-guided tour of the USS Lexington CV-16 Museum moored in Corpus Christi. Joyce decided to stay home due to a headache. After arriving, we paid the $12 each entry fee along with the $3 parking. Our first stop was the small IMAX Theater on board the ship. We watched an interesting film on the United States Air Force's Red Flag exercise. We thought it interesting that a USAF film would be playing on the Navy ship.
The USS LEXINGTON, CV-16, is a World War II-vintage aircraft carrier. Commissioned in 1943, she served the United States longer and set more records than any other carrier in the history of naval aviation. 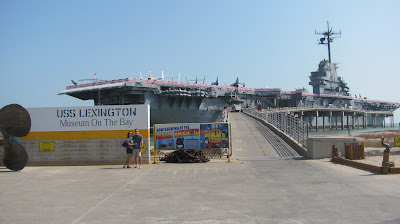 The ship was the oldest working carrier in the United States Navy when decommissioned in 1991. Lexington, an Essex-class carrier, was originally named the USS CABOT. During World War II, the final work on it was being completed at Massachusetts' Fore River Shipyard when word was received that the original carrier named USS LEXINGTON, CV-2, had been sunk in the Coral Sea. A campaign was launched to change the new carrier's name to Lexington, and the rest is history. The USS LEXINGTON, CV-16, was commissioned on February 17, 1943.
After training maneuvers and a shakedown cruise, Lexington joined the Fifth Fleet at Pearl Harbor. During World War II, the carrier participated in nearly every major operation in the Pacific Theater and spent a total of 21 months in combat. Her planes destroyed 372 enemy aircraft in the air and 475 more on the ground. She sank or destroyed 300,000 tons of enemy cargo and damaged an additional 600,000 tons. The ship's guns shot down 15 planes and assisted in downing five more.
After the war, Lexington was briefly decommissioned (1947-1955). When reactivated, she operated primarily with the Seventh Fleet out of San Diego, California. Although not involved in actual combat, Lexington kept an offshore vigil during tensions in Formosa, Laos, and Cuba. In 1962, she sailed into Pensacola, Florida, and began training operations, eventually being officially designated CVT-16, Navy Training Carrier.
The USS LEXINGTON CV-16 was decommissioned on November 26, 1991. Corpus Christi is the permanent home to this national treasure.

Posted by Darren and Joyce Romero at 1:57 PM