August 6, 2011 Mountain View Lodge and RV Park, Tetonia, Idaho.
We were up early but didn't get going till after 9:00. We were headed to Grand Teton National Park. We took Idaho 33 south through Teton Valley in Idaho and stopped for a quick breakfast in Victor before heading over Teton Pass into Wyoming. The pass was very steep with signs warning of 10% grades. At the top we stopped to check out the sign below and some posted hiking trails. In the valley below us we could see Jackson, Wyoming. 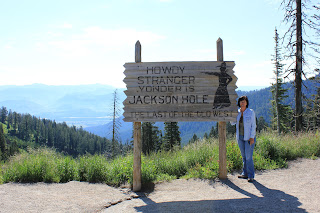 We descended the pass without incident in our Jeep. I would not want to pull our rig up and down this pass as it was hard enough to keep the Jeep from racing down the mountain without the constant braking. We passed through the small town of Wilson, Wyoming before turning towards the southern most park entrance.
Because we still have a valid "Volunteer Pass" we were able to enter the park for free. Otherwise, it would have been a hefty $25. Shortly after entering, we came across these eaglets high in their perch. 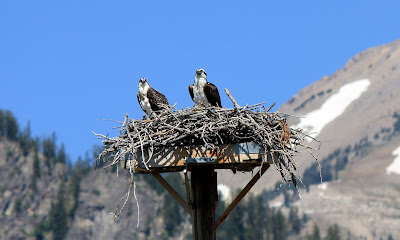 The south entrance leads you north through the park on a narrow and sometimes unpaved road called Moose Wilson Road. I was amazed that we were occasionally tailgated driving through the park. I mean come on..it's a national park, where can all these people be going in such a hurry? Isn't the whole idea to enjoy the sights and the wildlife? 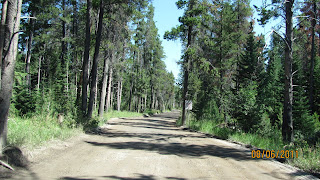 After about 9 miles, we emerged onto Teton Park Road near one of many visitor centers. We stopped briefly at the crowded visitor center (I don't like crowds) and looked around. Then we had to pass another manned gate and show our pass again to continue up Teton Park Road. This second gate is really the main entrance with two lanes of entry access and is just off Hwy 191 out of Jackson.
Before long we had full views of the mountains and Grand Tetons. 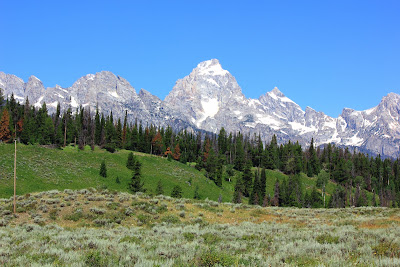 I was surprised that the road kept us far away from the actual mountains. 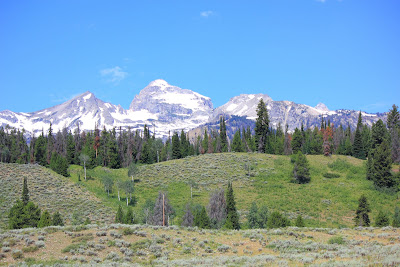 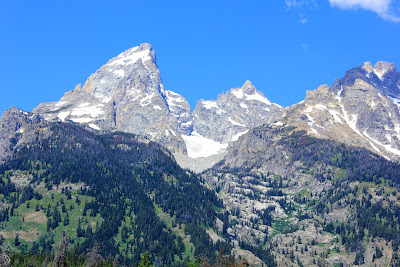 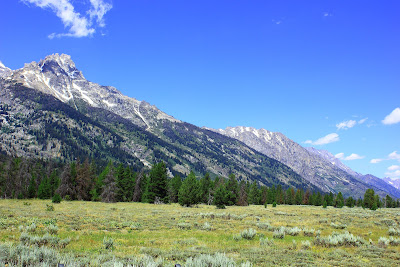 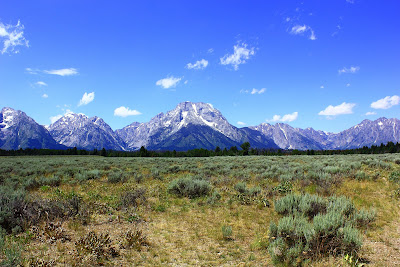 We traveled north in the park up to Colter Bay before turning around. Had we continued we could have driven into Yellow Stone N.P.
On the way back, we encountered our first wildlife traffic jam. We thought there was an accident but in fact, people were pulling over and bailing out of their cars to get pictures of a bear near the road. A park ranger soon showed up and she tried to keep everyone back as the mob was well within the restriction of 100 yds. from wildlife. The poor female ranger did a lot of screaming with little avail as swarms of foreigners pushed ever closer. Joyce managed to get the picture below. 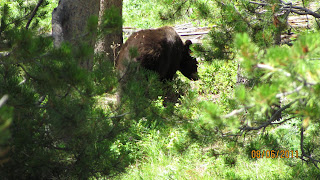 After we broke free of the traffic jam, we continued to head south and took a couple of scenic routes that we passed on the way up. The park is beautiful, but there's lots of vehicles and some of the parking lots at the overlooks are crowed/full (again I hate crowds).
We didn't see any wildlife except for the bear. The best time to see the wildlife I'm sure is early morning and evening. We will have to return to the park for some hiking.
We would have liked to have stayed longer but we needed to get back to Maggie and Rico. It was a good 8 hrs. before we got home and we had driven 150 miles round trip. The high today was 81 but it quickly cooled in the evening.
Posted by Darren and Joyce Romero at 9:11 AM