We enjoyed our stay in Wenatchee, impressed by the fact that it was a much larger city than we expected. I guess they can thank the railroad for their growth. Remember, the railroad moved from Leavenworth to Wenatchee. Leavenworth almost died yet Wenatchee grew. We were able to find a Target and buy a replacement Emerson countertop ice maker.
We got an early start with calm warm weather. Paul and Paula took the lead. We had just under 200 miles to travel this day.

View Larger Map
As we approached The Greater Seattle Area, we noticed the low clouds covering the Cascade Mountain tops. It looked ominous and dreary. 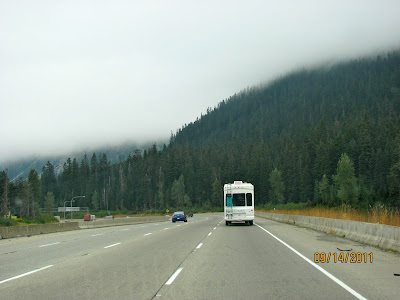 We arrived at American Heritage Campground by early afternoon and got checked in. The campground is set in a forest setting with paved roads but dirt sites.
We each selected sites near each other but with plenty of foliage between the sites. The temps were in the low 60's as we set up. The owner of the campground said it had been in the low 90's just last week.
The sites have full hook-ups but only 30 amps and a weak 30 amps at that. There was no WiFi in the campground. Fortunately there was no need to run the air-conditioners as the temps were very moderate during our stay i.e. 60's for highs and 50's for lows. We paid for 5 days at about $34 a day with tax. The forest setting was absolutely beautiful with plenty of places to walk the dogs. However, the last 3 days we were there it misted and rained causing the falling pine needles to stick to everything they touched. The ground also became wet and muddy.

During our stay we made a short visit into downtown Seattle by the waterfront. I should mention that to get anywhere in the Greater Seattle Area you had to travel on I-5 and that was absolutely no fun as it always seemed to be congested. Driving around Greater Seattle made us long to get away from the big city. 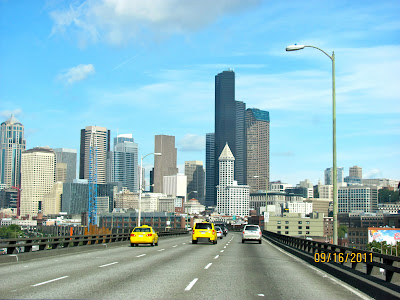 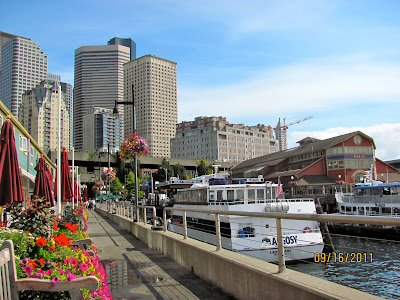 The downtown waterfront was a beautiful but noisy as road traffic from the elevated roadways was often deafening. We found parking under the elevated highway @ $6 for 1.5 hrs. 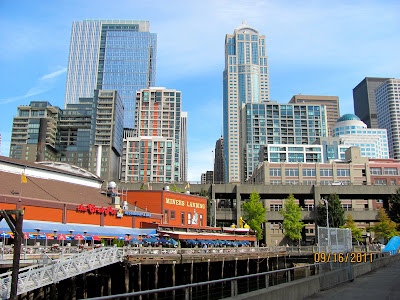 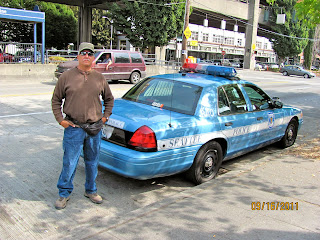 The city skyline is beautiful in its own urban concrete way. We enjoyed some expensive fish'n'chips and then walked around a bit checking out the urban market downtown. 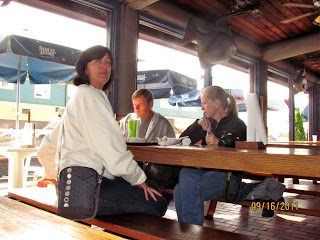 After a few hours we were all ready to escape the city realizing that rush hour was soon approaching. 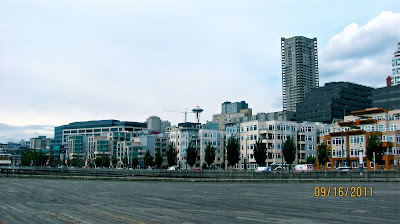 We got to the Jeep and out of the parking lot by 3:00 but still got caught up in traffic. In fact it took almost 3 hrs. to get home as traffic on the interstate was frequently backing up.
We enjoyed our visit to Seattle, brief as it was. Nice place to visit but I'm glad I don't have to put up with the traffic.
Our next stop will be in the Olympic Peninsula.

Posted by Darren and Joyce Romero at 11:31 AM

Email ThisBlogThis!Share to TwitterShare to FacebookShare to Pinterest
Labels: Washington