We got rolling out of Dayton RV Park around 9:30. As always I had a full tank of fuel and I made sure to have my two 5 gallon diesel cans filled. Paul and Paula have a reserve 50 gallon tank in the bed of his truck. Such a tank would be handy on trips like the one we had planned. We were headed to Lake Mead National Recreation Area where Joyce and I are scheduled to volunteer beginning the week of November 7th. Paul and Paula planned to just hang out in the area for a month before separating from us and heading further south.
The plan was to just push through along Highway 95 with our first stop in Hawthorne, Nevada only about 120 miles drive on the first day. We would have liked to go further but between Hawthorne and Beatty Nevada, there just isn't much if any RV parks.


View Larger Map
The roads throughout the trip were some of the smoothest nicest roads we've experienced in our two years on the road. Not much to see out there in southwestern Nevada. 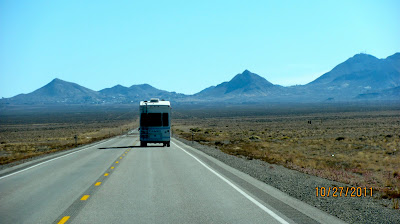 Our first overnighter was at Whiskey Flats RV Park on the north side of Hawthorne, Nevada. As we neared Hawthorne we passed a huge Army Munitions Depot that was really impressive after miles and miles of virtually nothing but a flat or rolling desert with mountains in the back ground. The weather had been mild with starting drive temps in the 40's and only reaching the 50's due to a cold front that had pushed through ahead of us.
Whiskey Flats was much larger than we expected but we got assigned sites 5 and 6 without reservations. Surprisingly the park was busy and seemed to fill quickly with travelers. 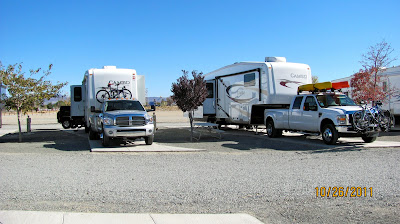 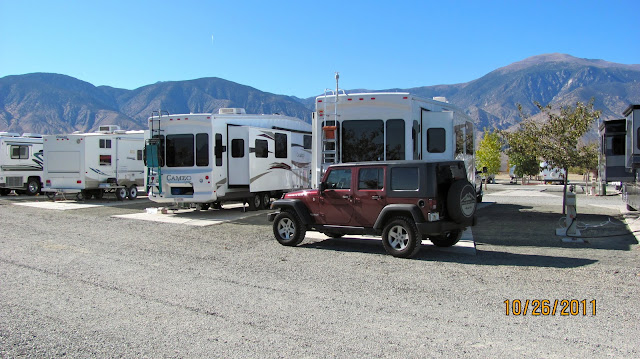 We paid about $25 with tax for our full hook-up site with WiFi next to Paul and Paula's. Both sites and I believe all if not most of the sites in Whiskey Flats are pull-throughs. The sites have a concrete pad for the Rv and gravel grounds. It was perfect for a stop-over with lots of room to walk our dogs. We both kept our trucks hitched to the fifth wheel and used our Bigfoot Levelers manually to level the rigs for the night.

The next morning we got an early start and got going around 9:00 with about 200 miles to go that day to Beatty RV Park in Beatty Nevada. Fortunately, I had called ahead as I discovered that an annual celebration "Beatty Days" was beginning that weekend. Beatty RV Park was able to get us in for just one night, (Thursday night) as they were filling up with vendors for the downtown event. 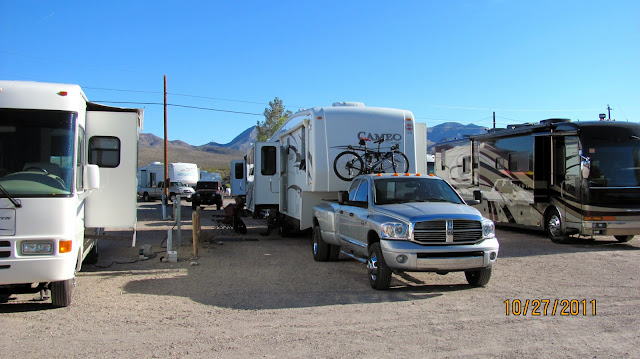 Again we paid about $25 for the overnight site and didn't unhitch. The site included full hook-ups with Wifi on gravel. However, the sites are a bit odd. Although our sites were pull throughs they were right behind each other. In other words, Paul and Paula were parked behind us facing the same direction in the picture above. Thankfully, they didn't need to unhitch and we were traveling together or they would have to back out of their site or wait for us to leave ahead of them! Also about 30 yards from the front of my truck was highway 95 making it a bit noisy but not bad. Beyond the highway was just open desert as we were a few miles north of Beatty. I saw wild donkeys on a bluff across the highway. Again it was good for an overnight stay.
The following morning, we got out ahead of Paul and Paula and filled up the truck as I had emptied my diesel cans the day before when we stopped for lunch in Tonopah, Nevada.
After filling up Paul and Paula caught up to us and we pushed on the 150 miles or so to Lake Mead National Recreation Area and Lake Mead RV Village. The drive through Las Vegas wasn't as bad as I anticipated on the Interstate. Once again, I was impressed with the smooth highways throughout this trip. After entering the manned gate for Lake Mead National Recreation Area I got our rig through with our Volunteer Pass but had to pay the $10 entrance fee for Joyce and the Jeep which was good for a week. Driving through the park towards Lake Mead RV Village the views of the lake were beautiful. 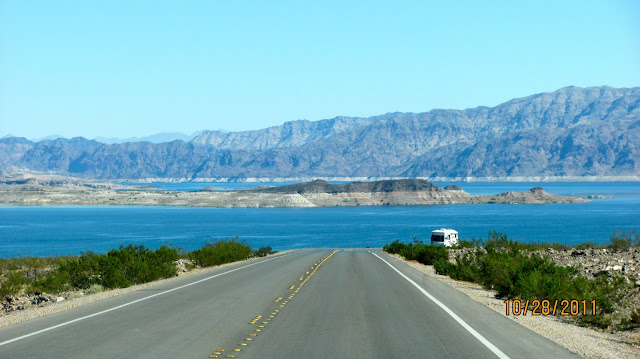 At Lake Mead RV Village we got registered without reservations. Joyce and I were assigned site 1204 and Paul and Paula took site 1103. The sites are full hookup pull-throughs with long sites and with outside views of the lake about a quarter mile away.There's a concrete patio pad and gravel everywhere else with the exception of the paved roads. Our site is in the same pull through row as Paul and Paula and we are parked ahead or behind each other in opposing positions. My truck in the picture below is actually parked in their space behind their rig. There's plenty of room in each space for our vehicles but parking my truck next to our pad provides us with some much needed extra shade as temps are in the low 80's but warmer in the sun. 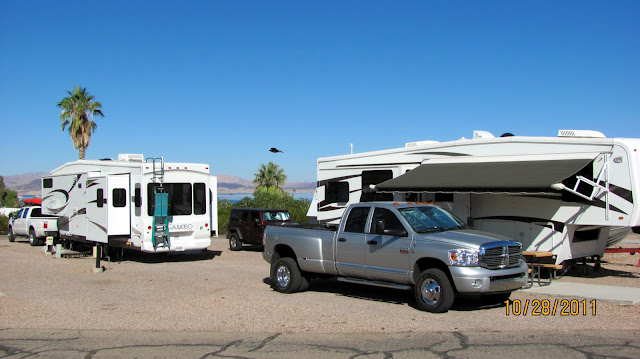 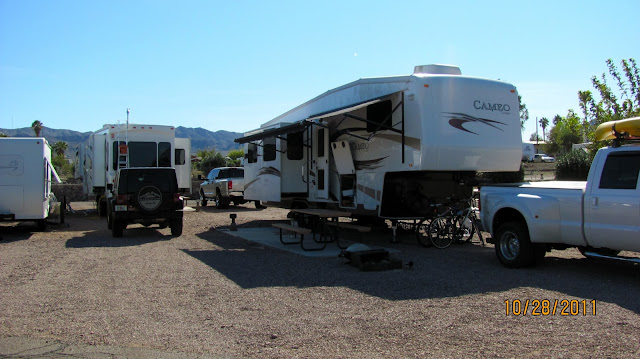 The WiFi via coupon for TengoNet is virtually useless but our Verizon MiFi works well. There is also cable TV hook-up provided. The park is actually very nice but surrounded by older well kept mobile homes that I assume were here before Lake Mead National Recreation Area became a park in 1964. We paid close to $240 for 10 days at which time we expect to be moved to the Volunteer campground. Paul and Paula paid for a month.
Coyotes roam through the park at night and we can often hear them yipping and howling at each other. The park is dated in some respects and the sites aren't very level, at least ours wasn't but all in all not bad.
We will hang out here for the 10 days before beginning our volunteer assignment next week which was described to us in the following manner:

It sounds like fun and should be interesting. As long as we are rewarded with a nice campground site we should enjoy our stay.
Posted by Darren and Joyce Romero at 11:47 AM