October 19 was a travel day from Susanville, Ca. to Dayton Nevada about 120 miles. We took our time getting ready as it was expected to be a short trip. If you are a regular reader, you know that we are continuing to travel with Paul and Paula. We got on the road around 11:00 with Paul and Paula leading the way. The road was good and we expected to stay on 395 through Reno and into Carson City before getting on Hwy. 50 for Dayton. However.....

View Larger Map
...Paul and Paula's gps took us on another route up route 341 also known as Geiger Grade a very steep and winding road that took us over Geiger Summit and into downtown Virginia City!
Geiger Grade is a 7 mile climb from Reno to a plateau about 3 miles north of Virginia City, NV. The earliest part of the climb is steep sometimes reaching 9-10%. The second third of the climb is not as steep at 5-6% grade. The last segment after a flat area is again at 9-10% grade. The climb ends at the Geiger summit (6,200 feet). 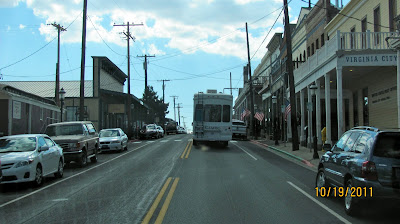 Of course, the descent from Virginia City down to Hwy 50 through an untold number of 25 mph hairpin turns was less than fun. After all that, we made it safely to our destination, Dayton RV Park and had a good laugh afterwards.
The workamper couple that manage Dayton RV Park were very nice and got us assigned to sites 30 and 31 which are long pull throughs. We were all interested in exploring the area so, we each paid $184 for a week.. We were initially shocked at how small this park is. Sure looks different on their web page. 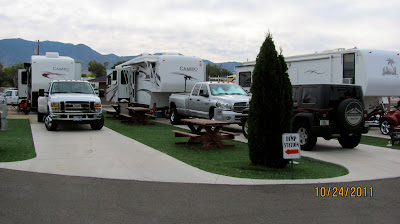 What looks like grass is actually a type of astro-turf and I was surprised at how well it worked. Much better than trying to keep grass growing in the desert! The sites have full hook-ups to include very good WiFi and cable. Although the sites are narrow, the park was very clean and the residents were very cordial. 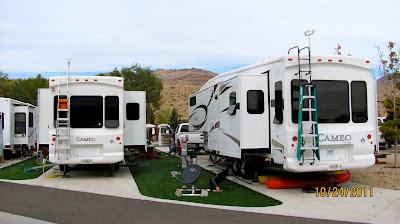 The day after arriving we drove into the Capital of Nevada, Carson City about 6 miles down the road and just explored and had lunch. Carson City has just about every major box store you can imagine.
On Saturday Joyce and Paula took a Ghost Walk tour through some of the historic homes in Carson City. (Check out Joyce's pictures on the America by RV Facebook page at the top of this blog.) Paul and I stayed at the campground and took advantage of the cheap breakfasts at the Terrible's Casino across the street.
On Sunday we took a ride in Paul's truck around Lake Tahoe. Lake Tahoe is about 40 miles from our campground and about 130 miles  round trip including driving all the way around the lake.
Lake Tahoe is a large freshwater lake in the Sierra Nevada of the United States. At a surface elevation of 6,225 ft (1,897 m), it is located along the border between California and Nevada, west of Carson City. Lake Tahoe is the largest alpine lake in North America. Its depth is 1,645 ft (501 m), making it the USA's second-deepest (the deepest is Crater Lake in Oregon, being 300 ft (91 m) deeper, at 1,945 ft (593 m). Additionally, Lake Tahoe is listed as the 26th largest lake by volume in the world at 122,160,280 acre·ft.
The lake was formed about 2 million years ago and is a part of the Lake Tahoe Basin with the modern lake being shaped during the ice ages. It is known for the clarity of its water and the panorama of surrounding mountains on all sides. The area surrounding the lake is also referred to as Lake Tahoe, or simply Tahoe. 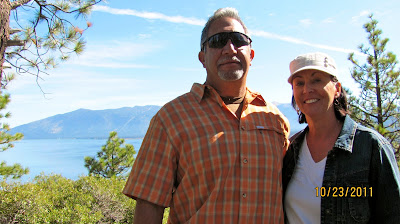 On Monday, October 24, we took the Jeep back up to Virginia City for some exploration. The roads in the city are very steep and the town is just full of history. We began our exploration with a walk to the local cemetery. We walked through the tourist shops on the old downtown boardwalks and explored some of the small museums and artifacts to include the Silver State National Peace Officers Museum.
Virginia City is one of the oldest established communities in Nevada. Folklore indicates that the town got its name from a man named James Finney who was nicknamed "Old Virginy". Finney was credited with discovering the Comstock Lode. His real name was James Fennimore, and he had fled his home state of Virginia after killing a man.
Virginia City could be considered the "birthplace" of Mark Twain, as it was here in February 1863 that writer Samuel Clemens, then a reporter on the local Territorial Enterprise newspaper, first used his famous pen name. 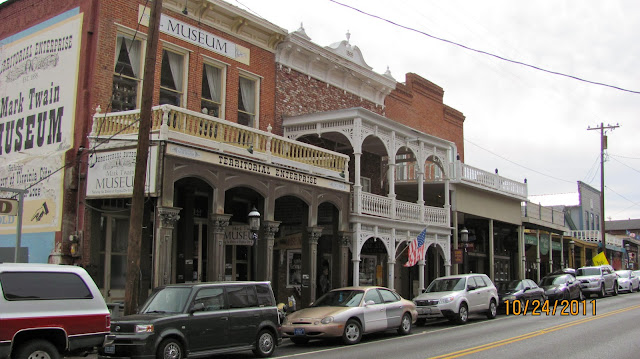 Like many cities and towns in the state, Virginia City was a mining boomtown; it appeared virtually overnight as a result of the Comstock Lode silver strike of 1859.

During its peak, Virginia City had a population of over 30,000 residents and was called the richest city in America. During the 20 years following the Comstock success "about $400 million was taken out of the ground.
The current population of Virginia City is 1,000 people in the town. 4,000 live in Storey County. It has one elementary school (Hugh Gallagher Elementary School), one middle school (Virginia City Middle School) and one high school (Virginia City High School). Many locals work at the shops in town that cater to tourists, while others seek jobs in the surrounding cities. 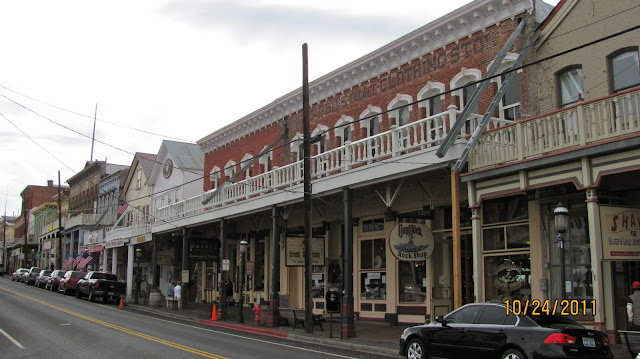 During our stay we've seen lot's of wild horses in the hills and along the highways. This band of wild horses we discovered on the edge of town (Virginia City).
Nevada is home to most of the nation's wild horses and burros. In fiscal year 1988 the estimate was 26,160 horses and 1,318 burros. Many herds have grown significantly since then. 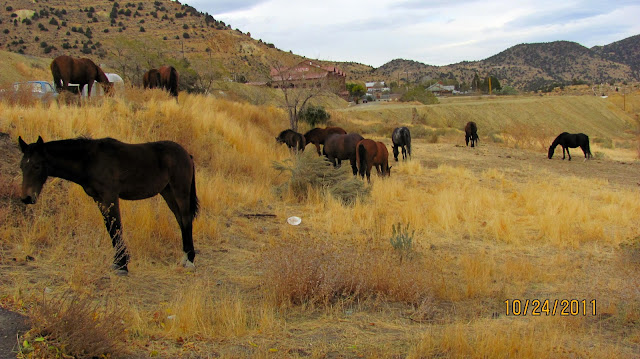 We really enjoyed our visit to Dayton, which is itself steeped in history as Nevada's first settlement. There is so much to see and do in this area which boasts relatively mild winters and summers. This is certainly a place that we will put on our list as a future home... when that time comes. Our week long visit just flew by and before we could get comfortable it was time to move on again.

We are all heading for Lake Mead National Recreation Area with a few overnight stops before getting there.


Joyce and I accepted volunteer jobs at Lake Mead National Recreation Area for the winter months. I'll explain more about it in a future post.

Posted by Darren and Joyce Romero at 10:02 PM