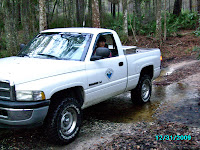 Our rangers have both been off this past week, one on vacation and the other on his regular 6 day off schedule.  You see the two Big Shoals Rangers work 8- 10 hr. days in a row and have 6 days in a row off.  One is off each week from Tues.-Sun. Subsequently their only overlapping day of work together is Monday.  Anyway, while the rangers have been off, we’ve been tasked with unlocking the 4 gates to the park at 0800 hrs. and locking up at sunset.  That requires a 10 mile round trip loop through the Big Shoals Public Lands. When they are off we have use of their Park Service 4wd truck that we use to travel between Big Shoals State Park  and Little Shoals State Park. 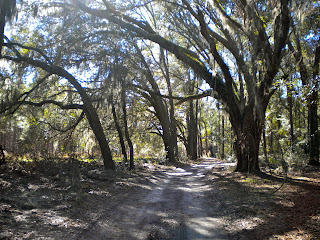 While we were out we did our clean-up rounds of the bathrooms and emptied the trash cans.  The weather had been beautiful two days ago and the parks had been busy, thus the garbage cans really needed emptying.  On the way back down Road 1, we came across hunters.  We could hear them shooting as we did our rounds. 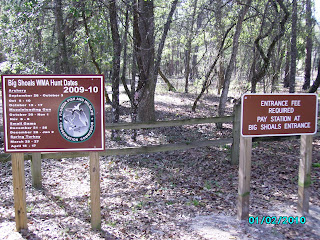 Hunting is permitted in areas of the Big Shoals Public Lands.  Currently small game hunting is permitted.  The deer for now are safe!  However, to be honest living with the sounds of gunshots all around is often a bit nerve racking and I know it concerns the park visitors.  The Woodpecker paved bike trail that cuts across the public lands and connects the two parks also cuts through the hunting zones as does Road 1 that essentially parallels the 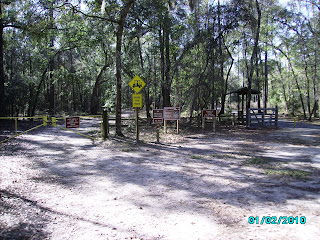 Woodpecker trail.  Both the Woodpecker bike trail and Road 1 are open to the public.  However during hunting we only lock the Road 1 gate and only on the Big Shoals State Park entrance.  The Little Shoals entrance to Road 1 has no gate or signage closing it to the public.  With my background in public safety, I’ve always  had concerns with this protocol.  Today we had park visitors that expressed their concern about riding their bikes while hunters were potentially all around them.  Later in the day, I spoke to a middle aged couple who were concerned about the hunting, but wanted to hike out to to see the Big Shoals on the Suwannee.   I assured them that the hike on State Park property would be free of hunters.  Well of course, when they came back about an hour later, they told me they made it to the shoals which were beautiful.  However, they said they encountered hunters with radios that said they were hunting wild hogs.

Well, as I noted above, the rangers were both off-duty.  I felt this matter required further investigation so I set out to see if I could find the offending hunters.  I found them, on the public lands, a group of three adult men and two young boys.  They had just finished wrestling a large oak tree trunk into their truck to burn back home at their campfire.  They were wearing two-way radios on their orange vests.  I questioned them regarding hunting near the river shoals.  They acknowledged being in the area but insisted they had not crossed the boundary into the park delineated by road 18.  I’m sure there was some “hair splitting” going on with regard to the boundary as they shouldn’t have come across “my hikers”.  However, I was in no position or authority to pursue the matter, nor the fact that they were removing wood from the Public Lands.   The point was made and I felt assured they wouldn’t make any more incursions.  Unfortunately, if the park rangers had been working, even they have no enforcement authority.  The Florida Wildlife Commission FWC and Department of Environmental Protection have certified law enforcement officers that have enforcement authority. 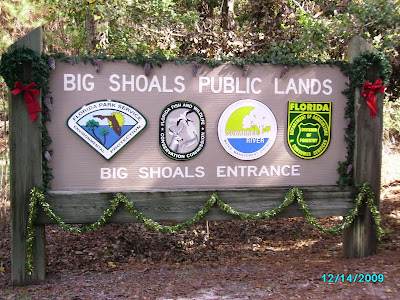 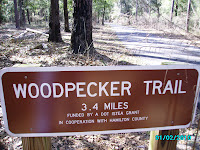 The Big Shoals Public lands with it’s two state parks is managed by four authorities, the Florida Park Service (FPS), Florida Fish and Wildlife Conservation Commission (FWC), the Suwannee River Water Management District (SRWMD), and the Florida Department of Agriculture and Consumer Services Division of Forestry (DOF).  Then you have local bicycle clubs maintaining bike trails that link to forestry roads and Hamilton County using a federal grant; Intermodal Surface Transportation Efficiency Act (ISTEA)  to build the Woodpecker Trail.  Do you think that such a combination of varied government land management agencies and agendas could result in conflict?  As a citizen observer living amongst them, it certainly isn’t difficult to see the conflict and its repercussions both current and probable.  However, I’ll stray away from that conversation as I don’t want this to turn into a rant.

Last night, I made arrangements to meet with Ranger Gary Erixston and return the park truck as he would be back on duty the next day.  As sunset was approaching I traveled to Little Shoals to lock the gate and then to his house near the entrance.  In route on Road 1, I came across more hunters in their trucks.  Gary and I left his house well after sunset to  drive me back to Big Shoals.  Again we traveled Road 1 and came across more hunters just leaving.  Gary spoke to them as they should have been out by sunset.  There is another gate that belongs to FWC that leads into the Public Lands off Road 9 that is left unlocked during hunting season.  It’s a game check point that is rarely if ever manned.  In fact a tree fell on the the little office maintained at the check point.  Thankfully tomorrow (or today as I write this) is the last day of hunting for a while!

We shall see what today has in store!

Posted by Darren and Joyce Romero at 10:19 AM