Exploring Big Shoals and the Florida Trail on the opposite side of the river.

January 10th, 2010, we awoke to 25 degrees and sunny skies, however it was predicted to be the one of the coldest days of the season. Our outside spicket had frozen overnight even though I left the water tricking.  It didn’t thaw untill 11:00.

Late in the morning, Ranger Dylan Shoemaker picked me up and we drove over to Stephan Foster Folk Culture Center to run errands and pick up a high watt light and plastic wrap for the outside spicket.  Dylan was concerned that the water pipe may burst from freezing.  The plan was to create a tent of plastic wrap around the spicket and place a high wattage light for heat inside the tent to keep the spicket from freezing.

As we traveled down county road 135 we saw examples of ice designs created by folks who left their water hoses running on trees or fences.  Some were very impressive. Of course the water is left running to prevent freezing the pipes. In this picture the resident put the hose up in an oak tree creating the icicle designs. ( I corrected the date on my camera after the picture was taken). 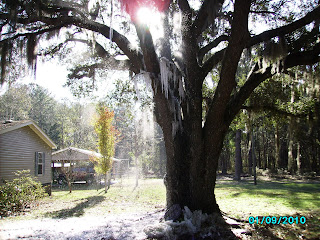 We also traveled to Kelly’s RV Park to fill one of my two 30 lbs. propane tanks.  Our coach has the automatic switch over system, which enables the gas to automatically switch from the empty tank to the full tank so there is no disruption of service.  I had the tank filled for $20.  I had last filled one of the tanks on Dec. 22, 2009.

After our errands Dyland and I picked up Joyce.  Joyce and I bought Dylan lunch at a truck stop off I-10 as the three restaurants in White Springs are all closed on Sunday. 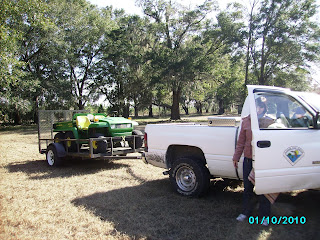 We then trailered the Gator south on US 41 to another ranger’s state owned house and property.  We planned to explore the opposite side of the Suwannee river from where we live, which is also part of the Big Shoals Public Lands.  After getting close to the river in the Gator, we hiked portions of the Florida Trail near the river.  It was amazing to us Floridians to see so much ice and icicle formations near the river. 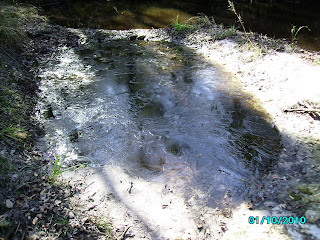 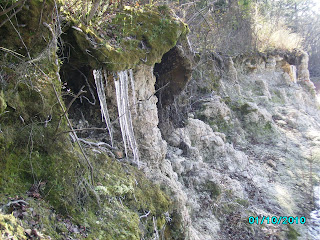 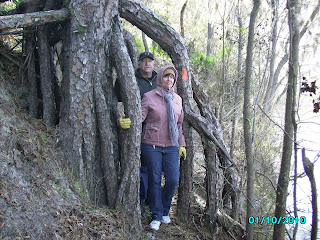 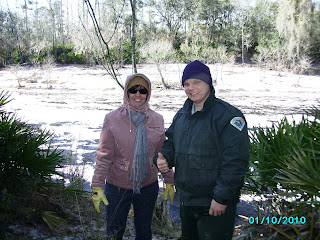 This was the area that the UF students from the previous post had camped and spent the night along the river.  The ashes from their campfire in the campfire ring (not pictured) were still hot.  There is a portage area to leave the river before crossing the shoals just upstream from the campsite. 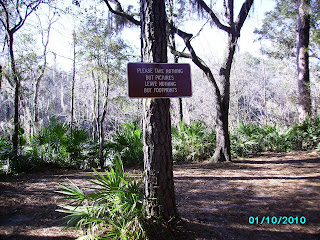 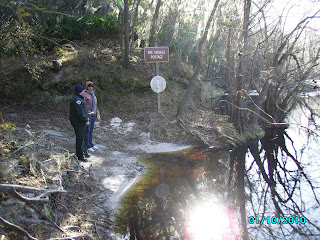 The primitive campsite is right next to the Big Shoals which is on the other side of the palmetto bushes in the picture above.  You could clearly hear the roar of the river flowing over the shoals. 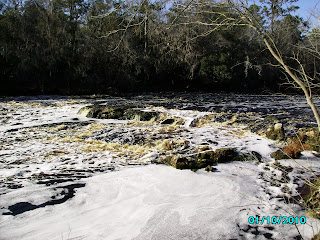 We came across this beautiful water fall during our hike.  This stream empties into the Suwannee River. 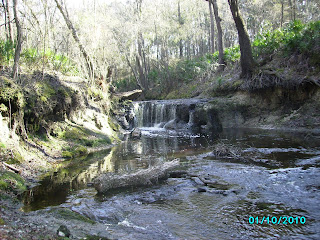 We came across some other streams, creeks and springs along our hike and journey on the John Deere Gator.  It seemed likely one stream we crossed in the Gator, we would not be able to cross again as we barely made it the first time!  So we made our way back to the truck on the Gator via some paved roads.  I sat in the back of the gator protected from the wind and heated by the engine! 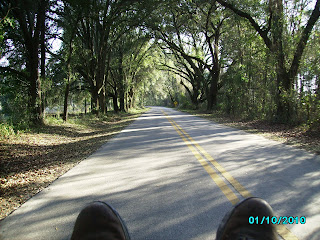 Joyce and Dylan and to suffer through the wind chill produced by traveling at 20 mph in 40 degree temps in the Gator! 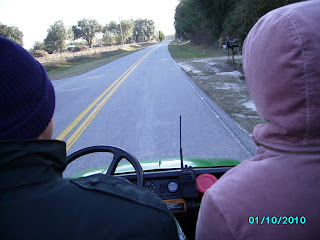 We had a wonderful day exploring the other side of the river and took lots of beautiful pictures of the Suwannee River.  More pictures than we could possibly hope to share in this blog.  It's unfortunate that this area on the other side of the river is so far off the beaten path that unless you are familiar with the local surroundings or study hiking websites you might not ever discover these beautiful trails, streams and springs.

Posted by Darren and Joyce Romero at 8:57 AM