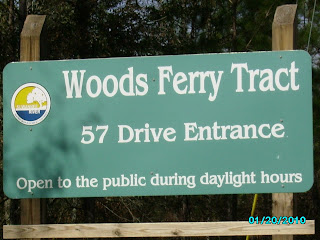 We decided to take a ride out to Woods Ferry, a Suwannee River day use park and primitive campsite used primarily by kayakers or canoe expeditions.  We missed the gated entrance to the campsite as we drove down the very long and rough dirt road. 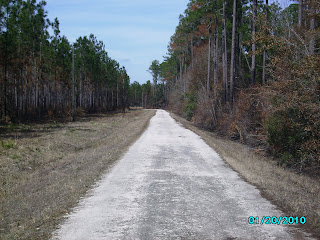 However, we came to the end of the dirt road and found a little roundabout at the day use park.  We parked and looked around at the small beach on the river.  We spoke with a local 20 something fisherman.  He told us he comes out here 2-3 times a week to fish and soak in the solitude.   I couldn't imagine driving down the potholed rough road that often. 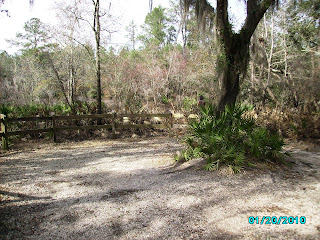 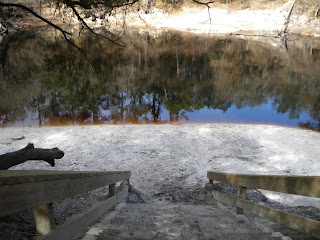 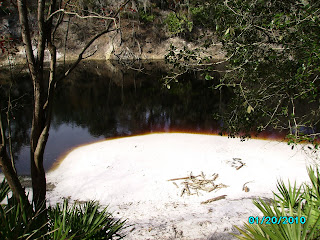 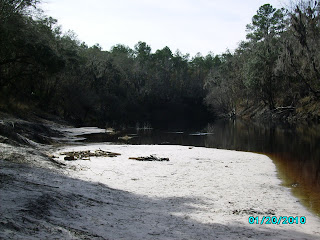 We had hoped to backtrack to the Florida Park Service site at the Woods Ferry tract, but we  didn't have time after we got a call to pick up my prescription sunglasses.  We were 30 minutes away and had to be at the Walmart in Live Oak within 30 minutes if we wanted to pick them up today as the optician was only working for half a day.  So we ended up leaving.  Because of the rough road, I'm not sure if we will make another trip out there.

On the way home from Live Oak we could see clouds of smoke towards White Springs, the telltale sign of a burn in the forests.  As we got closer, we lost sight of the smoke and couldn't tell where the burn had been,  When we got back to the rig, there was a light dusting of forest ash over everything and the smell of a forest burn in the air.  With the generally lower humidity, this seems to be the season for the Division of Forestry to conduct their forest burns.  Ranger Dylan Shoemaker has been out of the park the last couple days participating somewhere in forest burns.

I made preparations for the forecasted rain.  I rolled up our outdoor carpet, pulled the cover off the car and rolled out the awning.  It's expected to rain all night Wednesday and all day Thursday.  So at least the ash will be washed off.  We shall see how it goes.

Later that evening, I made a phone call to an old Air Force buddy, Mike that I hadn't spoken with in years.  Our families had stayed in touch with obligatory Christmas Cards, but hadn't visited or called.  It was great to catch up with him and his wife.  We plan to see them sometime in the next few years when we take a trip to Mass.

Ranger Gary Erixton invited us for dinner with his family and Dylan Thursday night at his home.  He said he wanted to show his appreciation for the work we've done.  So we are looking forward to that.

Posted by Darren and Joyce Romero at 7:36 AM