Humming bird at the park's feeder. 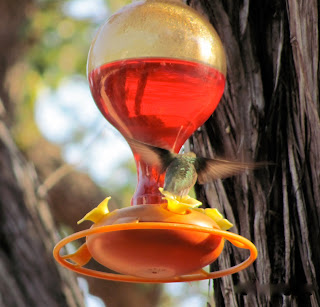 April 6, 2010,
The morning started off muggy and warm with temps in the upper 60's warming to the lower 80's. Wind gusts were at 25 mph. We gave Maggie and Rico their usual walk and then made plans to find a lavender farm that Joyce had seen signs for in her travels. We took off in the car towards Johnson City, Tx. We found the signs for the lavender farm but didn't find the farm. So we continued into the town. We decided to go to the Lyndon B. Johnson National Historic Park in Johnson City. 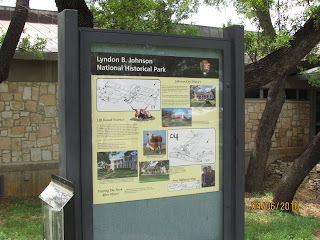 We toured the visitor center and obtained directions to the ranch about 13 miles away. 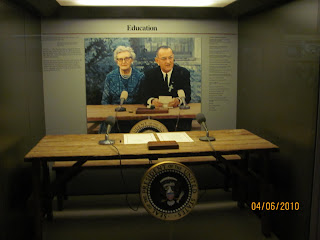 I was suprised that the exhibit was fairly busy. On the same grounds about a block away is President Lyndon B. Johnson's boyhood home. The National Park Visitor Center has a timeline exhibit of the President's life and a description of the Great Society legislation including audio stations where you can hear history from the people who experienced it. There is a second exhibit area at the LBJ State Park visitor center. 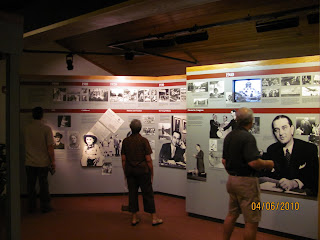 After visiting the visitor center, we took the sidewalk that turned into a gravel path out to the Johnson Settlement which is where the grandparents established a ranch. The circular trail is slightly less than a mile round-trip. Along the way you will find an exhibit center which will introduce you to the days of the cattle drives and the log home of President Johnson's grandparents. 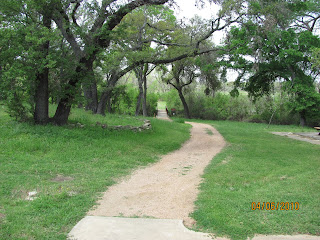 Along the path, we came across these two Longhorns grazing in the national park. 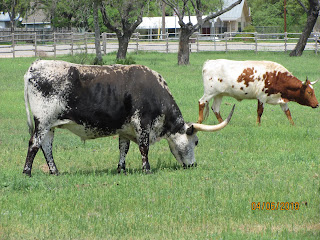 This is one of the barns on the settlement property. 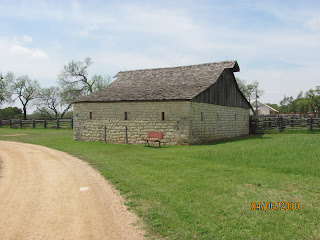 We thought this wall of stacked stones was interesting. The stones are actually loosely laid without support from mortar. Not something you would see in Florida! 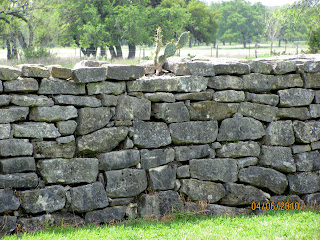 This is the cabin that President Johnson's grandparents lived in. 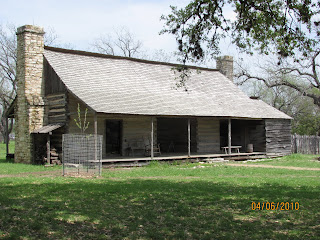 To be honest, we didn't find the Johnson settlement or the National Park in general to be very exciting. We skipped President Johnson's boyhood home and the 13-14 mile one-way trip to the LBJ ranch. Perhaps we would have had a better opinion had we made those excursions as well.
Back home I saw a bird fly into the pin box of the fifth wheel. The small bird flew out and I investigated further. 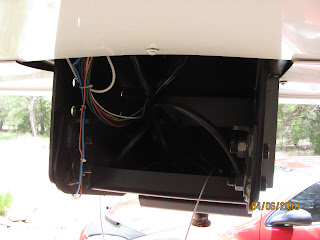 I could see what looked like a nest in the box. 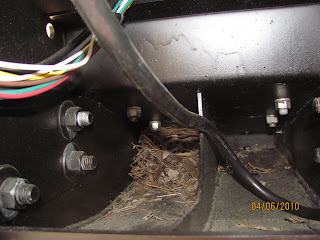 Upon closer examination, it was in fact a nest. Fortunately, the nest was not occupied with egg or chick. So, I cleaned it out and filled the gap with a plastic grill cover. I watched then as two small birds tried to regain access to the box carrying nest materials. Before long they gave up. 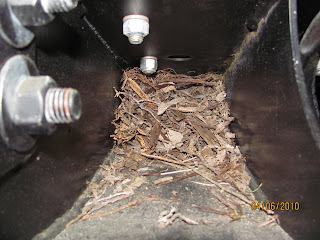 In a much earlier post, I had explained that I aired up the rear dually tires on my truck to 75 p.s.i. in preparation for towing. Well I began to notice some wear in the center treads of the dually tires. So, I decided to investigate further. I checked the forums that seem to argue between max inflation as indicated on the vehicle label and inflating to the max of the tire (as printed on the tire 80 psi) when pulling a fifth wheel. I double checked the vehicle label on the driver side door and it read inflate to 65 psi for heavy loads and 40 psi for light loads on the rear axle. Subsequently, I deflated the tires to 65 psi and will try that on our next move to Kerrville.
Regardless, I should have deflated the rear tires some before driving around unhitched. I'll be checking the wear on the tires to see if there is any difference. To be accurate, the wear I noted is not real significant at this point, but I'm glad I noticed it. I'll need to schedule a tire rotation in the near future. I currently only have approximately 7800 miles on the truck.
Posted by Darren and Joyce Romero at 9:14 PM