April 22, 2010.
We awoke to a beautiful day with brisk morning temps. The temperature quickly rose along with the sun although it only reached the middle 70's.
We had seen a sign near the entrance of our park, Brantley Lake State Park for Sitting Bull Falls - 32miles southwest.  We decided to explore and try and find it.  We took off in the direction indicated by the sign on NM Hwy. 137. 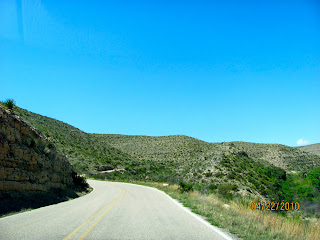 We were soon into the Guadalupe Mountains enjoying the twisting winding roads. 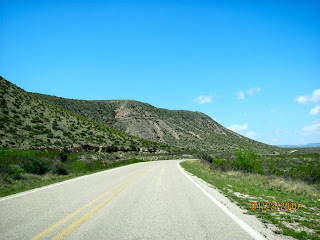 Shortly after entering the Lincoln National Forest, we came across the small parking lot at the dead end of Sitting Bull Drive. The picnic shelters were like small stone buildings minus the windows and doors. A group of kids and their school buses were all over the parking lot and the park. 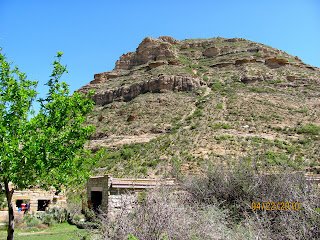 Joyce and I took the concrete sidewalk out to the falls after paying the $5 day use fee. We weren't really dressed appropriately as the wind was blowing and it was much cooler in the mountains. 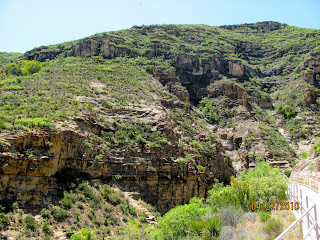 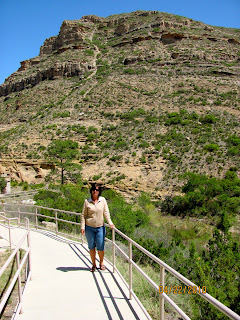 Sitting Bull Falls
The water of the 130-foot falls is highly mineralized and has deposited a massive travertine bluff that towers over the picnic ground. The size of the travertine deposit indicates that the falls may have been much bigger in times past. Special attractions: One of the largest waterfalls in New Mexico. There is a cave system hidden behind the falls. The cave is accessible only by appointment and requires park ranger guide. The trail up to the cave is dangerous and therefore is off limits without permission. 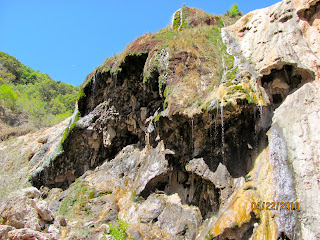 From what I read on signs in the park, the water comes out of the ground in the mountains and runs down creating the falls. Although tall, there certainly wasn't a lot of water pouring over the top. Classes were being conducted for the kids at the bottom of the falls. 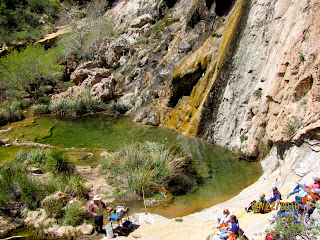 We all like kids, but I sure don't like going to what you expect would be a nice peaceful part of nature only to find kids all over the place and adults and kids yelling at the top of their lungs!  Kinda ruins the experience. 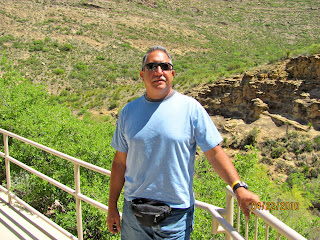 We spent about 30 minutes at the falls and headed back.  Actually we went into Carlsbad and checked out the small mall.


Back home at Brantley Lake State Park the winds had really picked up. There was a high wind advisory. The forecast was for a high wind warning tomorrow with gusts up to 60 mph and 30-45 mph sustained winds. Not good considering the fact that the great views we had on the top of the ridge, meant we were really exposed to the winds. We had planned to leave tomorrow but were concerned about traveling in the winds. We would have to make a decision in the morning.


Posted by Darren and Joyce Romero at 7:20 PM