April 26, 2010.
It was another beautiful day in Almogordo and the Tularosa Basin. The temps overnight were in the 50's with an expected high in the lower 80's.


Today we visited White Sands National Park about 22 miles from our RV park, Boot Hill RV Resort.  The ride out on Hwy 70 was easy. Hwy 70 is often closed when the military conducts tests at White Sands Missle Range. A closure was scheduled today for an hour beginning at 12:10. However, the closure would not affect us entering or leaving the park. Along the way we passed Holloman Air Force Base and could see the FamCamp from the road. 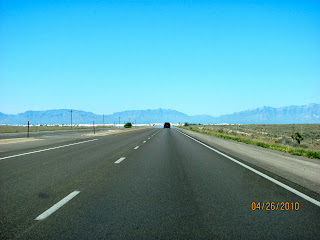 Before long we were arriving at the national park. 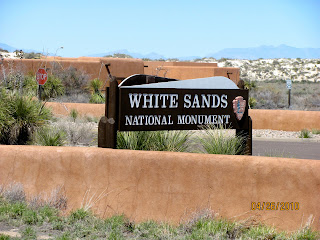 There is ample parking for cars and the lot will also handle RVs. However, there is no RV camping at the park. 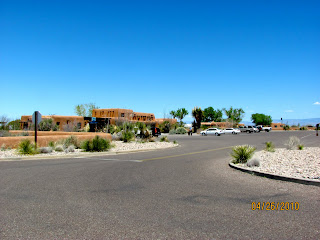 The beautiful adobe welcome center and offices were built in the 30's. Inside the welcome center, we watched a short video about White Sands, the movement of the dunes and the plant and animal life. There's also a couple of gift shops in the building. 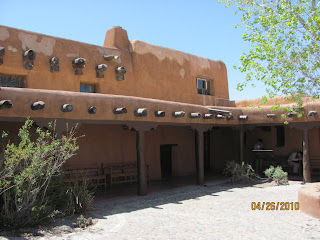 We planned to do a "self guided tour" along the 8-mile stretch of road in the park. So after leaving the welcome center we drove about a 1/8 mile to the ranger station to pay the $3 per person admission fee. 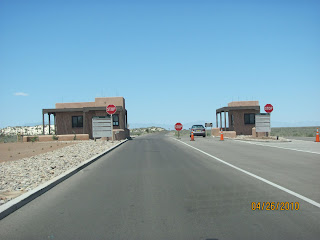 The drive started out looking like sand interspersed with shrubs and typical vegetation in this part of the desert. 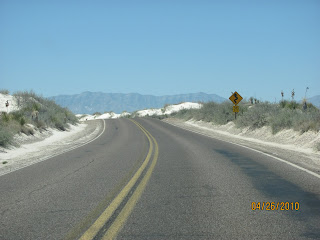 The drive soon turned to nearly solid gypsum sand. It looked a lot like some of the beach areas along the gulf coast. However, the beaches are comprised of quartz sand. 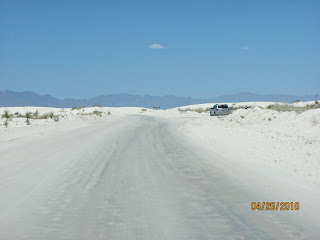 The largest pure gypsum dune field in the world is located at White Sands National Monument in south-central New Mexico. This region of glistening white dunes is in the northern end of the Chihuahuan Desert within an "internally drained valley" called the Tularosa Basin. The monument ranges in elevation from 3890' to 4116' above sea level. There are approximately 275 total square miles of dune fields here, with 115 square miles (about 40%) located within White Sands National Monument. The remainder is on military land that is not open to the public. This dune field is very dynamic, with the most active dunes moving to the northeast at a rate of up to 30 feet per year, while the more stable areas of sand move very little. The pure gypsum (hydrous calcium sulfate) that forms these unusual dunes originates in the western portion of the monument from an ephemeral lake or playa with a very high mineral content. As the water evaporates (theoretically as much as 80" per year!), the minerals are left behind to form gypsum deposits that eventually are wind-transported to form these white sand dunes. Many species of plants and animals have developed very specialized means of surviving in this area of cold winters, hot summers, with very little surface water and highly mineralized ground water (click on the Animal or Plant links to the right for more information). For a general overview of the geology of the Tularosa Basin and White Sands National Monument, click on "Related Links".
Joyce and I parked the car and decided to try out the two sleds we borrowed from Boot Hill RV Resort. So we climbed the nearest tall dune and I captured this photo with the snow covered Sierra Blanca Peak in the distance. 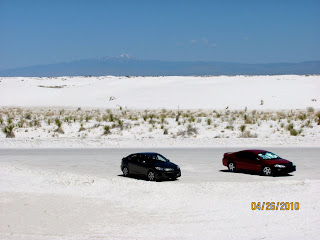 Joyce was barefoot and out of the car headed for the dunes before I was able to get my shoes off! I caught her first attempt at sliding. 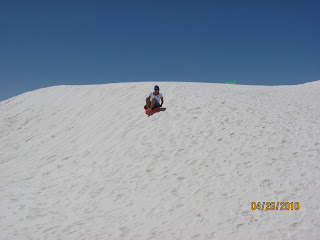 It's not as easy as it looks. You need to find a really steep dune and wax the bottom of the sled. Even so, I tended to just plow into the sand. 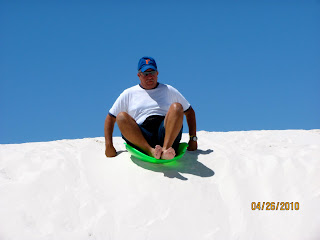 Looking for a taller steeper dune. 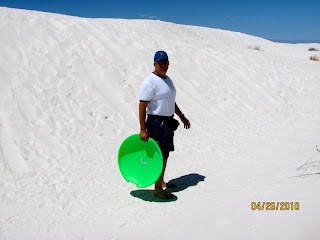 Before long we had enough. We decided that sledding was better suited for kids, possibly because they are smaller and lighter. Yea we were kids once! 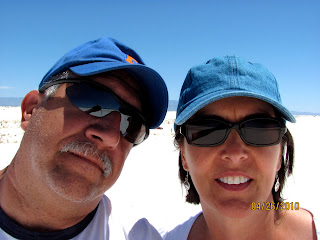 We completed our drive through the park. I thought these picnic tables were kinda unusual. I sure wouldn't want to visit here in the middle of the day during summer! 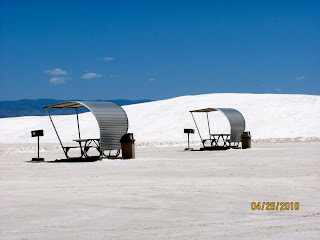 We had a great time at the park.  We enjoyed exploring and experiencing the natural beauty of White Sands National Park.
Afterwards, we went into Alamogordo to do some shopping. After we got back, a nice couple, Phil and Stephanie from Alto, NM. pulled up and explained that they have a Carriage Cameo. They were inquiring about the tires that we have on our rig. I showed them our Goodyear G614s. They said they recently experienced a blow-out with a Duro Tire and it damaged their rig. We chatted for awhile before they had to go home. We enjoyed their company and sharing experiences. We wish them well on their planned trip to Alaska this year.
Posted by Darren and Joyce Romero at 8:23 AM