February 1, 2011 Shields Park NAS,  NAS Corpus Christi.
Yesterday, we left Buckhorn Lake RV Resort just after 9:00. Our new friends, Mike, Leslie, Paul and Mary got up and out to see us off. That was so nice of them.
Soon we were on the road pushing towards NAS Corpus Christi. Our son-in-law had made arrangements for us to get on the Naval Air Station and stay at Shields Park NAS Recreation Area.

View Larger Map
We made the trip with only a short stop for lunch. 240 miles and 5 hrs. later we had followed the GPS to the wrong gate! We were supposed to meet our daughter and son-in-law, Ashley and Andrew at the Main Gate but, the trusty GPS took us to the back North Gate. I plead ignorance having relied on the GPS. They met us at the gate and took us to Shields Park NAS Recreation Area. We got checked into the campground for one night in site 65 near the water. A nice full hook-up site with a concrete drive and slab. However, we only had this site for one night. We would have to move in the morning to another site. 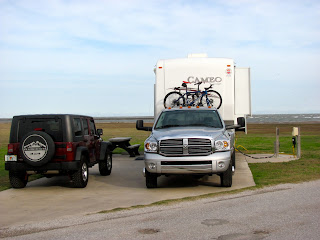 We spent the rest of the evening with Andrew, Ashley and their boxer Ava (A3). We also brought Maggie and Rico over to run around with Ava. Andrew is in Multi Engine flight certification training with the Navy. So, he filled us in on his training. They expect to only be stationed here for 6 months. In fact we will be returning in June to be at the ceremony for the presentation of his "wings". We had a delicious vegan dinner and before long it was time to head home and get to bed.
The howling wind woke us early though we weren't inspired to get out of bed. The dreaded "massive storm of the season" and it's cold front was pushing in. The morning temperature was dropping from an early morning high of 64 degrees. Sea spray from the seawall a hundred yards away and carried by the strong wind was misting on our back window. 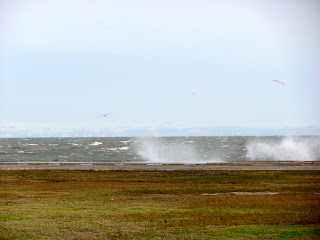 I left the truck hitched to the fifth wheel and had used the BigFoot levelers to manually level the rig. The point being that it would be easy to just pull in the slides and make our move this morning. I'm sure glad that we did because the wind was ferocious making it uncomfortable to be outside.
We finally got moved to site 110. It became obvious that this is in the older section of the campground. There is no concrete drive and so the fifth wheel is parked on grass adjacent to a concrete patio. The sewer connection is about a foot high of the ground and 14 ft. away making it practically useless. However, it will do as we have to move again on Saturday to yet another site. It seems this park is very popular at this time of year! We want to stay in the area for a month. It remains to be seen if we will be able to stay at Shields Park NAS Recreation Area for the entire month. We are on "the waiting for a cancellation list" to extend our stay. None of the sites have trees, bushes or barriers just open grass fields with paved roads.
After getting settled into the new site we met up with A3 at their home. I brought the truck over and after emptying the bed of the truck and removing the fifth wheel hitch, we had a clean bed to load up with cardboard boxes to haul to the recycler. One side of their garage was unusable due to all the (collapsed) boxes from their recent move from Pensacola. Once we got the boxes (cardboard) hauled off we spent the rest of the afternoon shopping. Now we are back at A3's house making dinner.

Tonight and the next few days we are expecting subfreezing lows with highs in the 30's and 40's. I'm not looking forward to those frigid temps in the wind! I made sure we had water in our tank as I'll be disconnecting the water hose at night!


NWS is forecasting an arctic cold front that will blast through South Texas on Tuesday morning around noon and will usher in the coldest air of the season. Temperatures will plummet Tuesday afternoon and fall into the mid to upper 20s inland to lower 30s along coast by Wednesday morning. There is a potential for a mix of light rain, snow and sleet to develop as early as Thursday afternoon, continuing through Friday morning before ending. Several hours of freezing temperatures will also be possible across coastal locations, including the island, especially on Thursday and Friday mornings.
Posted by Darren and Joyce Romero at 6:48 PM