July 2, 2011.  Durango Year Round RV Park.
Yesterday the four of us, Joyce and I, Paul and Paula decided to go into Durango and ride our bikes.
We left our park at 8:30 which put us on the trail around 9:00. It was a beautiful day as we road along the Animas River on the Animas River Trail.
Animas River is a 126-mile-long (203 km)[2] river in the western United States, a tributary of the San Juan River, part of theColorado River System. The Spanish named the river "Rio de las Animas Perdidas", "River of the Lost Souls". It is also the last free-flowing river (un-diverted) in Colorado.
The Animas River rises high in San Juan Mountains of Colorado at the confluence of the West and North forks at the ghost townof Animas Forks and flows south past the ghost towns of Eureka and Howardsville. At Silverton, the river flows into the Animas Canyon. The Durango and Silverton Narrow gauge railroad follows the river through the canyon to Durango. From Durango the river flows south into New Mexico through the town of Aztec to its confluence with the San Juan River at Farmington.

The trail is only about 7 miles of paved asphalt. We parked at the visitor center in town and road into town towards the heart of Durango. 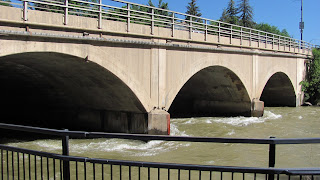 Durango is larger than I had imagined but I liken it more to a town than a city. It's very linear following along Hwy. 160 and Hwy. 550 and in some places only a few blocks wide. There is plenty of shopping with a small mall, Walmart, Home Depot, Albertsons and many other similar shops. 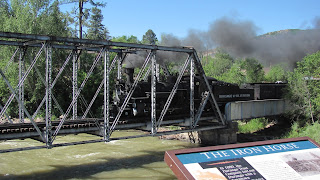 On the way back we heard the Durango-Silverton train approaching so we raced back to get a good vantage point. 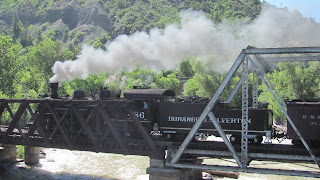 Durango is most known for the Durango & Silverton Narrow Gauge Railroad, a heritage railway, which travels from Durango to the historic mining town of Silverton, Colorado on steam-powered trains with rolling stock dating back to the 1920s and before. 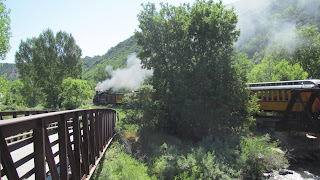 After riding on the Animas River Trail we decided to take a detour into the historic part of Durango and get some lunch. After locking up the bikes, we did some window browsing.
I stopped in a local bike shop and noticed several championship jerseys from Ned Overend hanging on the wall. Overend is a world class mountain bike champion and is in the Mountain Bike Hall of Fame.  He has won the Durango Iron Horse Bicycle Classic 5 times. I asked about the jerseys and leaned that Overend is a regular in the shop and had just left. Okay..ok I'll stop. Some people like football, baseball..I like cycling!
Anyway, we continued browsing and then stopped at the Old Tymers Cafe for an early lunch.
After lunch we walked around downtown some more and then decided to take advantage of the free bus trolley. So, we hopped on board and took a ride around town. The ride takes about 20 minutes round trip. 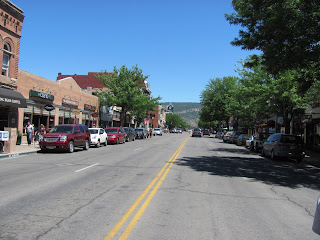 The City of Durango is a Home Rule Municipality that is the county seat and the most populous city of La Plata County, Colorado,United States.[6] The United States Census Bureau estimates that the city population was 16,627 in 2009. Durango is located at

37°16′N 107°52′W at an elevation of 1988 metres (6512 feet). According to the United States Census Bureau, the city has a total area of 6.8 square miles.
The town was organized in September 1881 by the Denver and Rio Grande Railroad (D&RG) to serve the San Juan mining district. The D&RG chose a site south of Animas City for its depot after Animas City refused to pay a dowry to the D&RG. The city is named afterDurango, Mexico, which was named after Durango, Spain. The word Durango originates from the Basque word "Urango" meaning "water town" 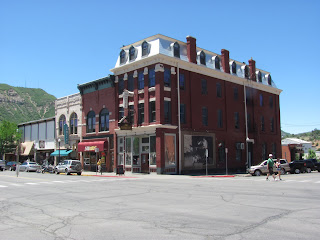 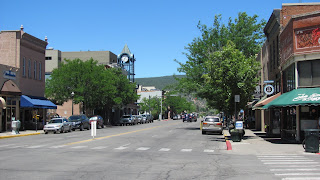 Main Avenue cuts through Downtown Durango, home to clothing boutiques, restaurants, newsstands, tourist and gift shops, a mall, bars, lounges and other businesses. Many buildings downtown are several stories high and include apartments in the upper levels. Durango's two oldest hotels, The General Palmer and The Strater Hotel, are both at the South end of Main Avenue, one and two blocks away from the train station, respectively. It is also home to many restaurants. Many serve specialty foods including Mexican, Italian, French, Thaiand Japanese and others serve American favorites. Main Avenue is walked by thousands of tourists each week, making it the most popular shopping and relaxing tourist destination in Durango. 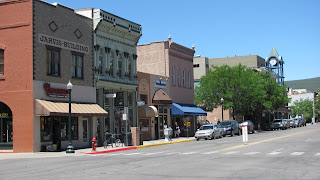 We had a great time but, before long it was time to head back and let the dogs out.  We plan to move on July 7th after the Holiday rush is over. It's interesting to watch from our campsite all the RVs headed north on Hwy 550. Even this park is nearly full to capacity for the July 4th Weekend.
Posted by Darren and Joyce Romero at 9:31 AM