July 23-24, 2011 Pony Express Rv Resort, North Salt Lake City.
We've been busy since landing at the Pony Express Rv Resort. Yesterday we drove into Salt Lake City for a walking tour of Temple Square in Downtown Salt Lake City, one of Utah's number one tourist attractions and world headquarters of The Church of Jesus Christ of Latter-day Saints. We parked in a downtown parking garage and hoofed it after first visiting the downtown visitor center. Temple Square is open to the general public and entry is free. However, don't plan to enter the Salt Lake Temple. It is secured by a fence and security measures. The public is not invited!
This magnificent granite structure was constructed over a period of 40 years, from the laying of the cornerstones on 6 April 1853 to the dedication on 6 April 1893. The temple is considered the House of the Lord and is sacred to members of The Church of Jesus Christ of Latter-day Saints. Today Church members gather in more than 100 temples worldwide to worship and participate in sacred ordinances, such as eternal marriage.
We visited the world famous Tabernacle and listened to the acoustic demonstration. A organist was scheduled to play but we missed it.
Walking the grounds of Temple Square we were amazed at the beauty and grandeur. The office building below is a massive sky scraper with at least 26 floors.

We toured other buildings to include the Bee Hive House, former home of Brigham Young. The two twenty something year old "sisters" giving the tour got to be a bit too pushy with their missionary work trying to convert these 50 year olds to the Church of Latter Day Saints. We were the only two in the very small group that were not members of the LDS and they tried to give us their literature and invite us for a sit down... Gimme a break! That kinda ruined it for me and we decided our walking tour was over. I'll spare you the rant!

We got back to the Jeep and took a ride up to the Utah State Capital building. A handsome piece of architecture.
Today we got up relatively early for a ride out to Antelope Island State Park on the Great Salt Lake. It was expected to be hot with temps in the upper 90's.  We loaded the bikes on the Jeep and took a picnic lunch.

The island is very large and almost tree less. There are steep sloping meadows and some rocky cliffs and peaks. On the ride out to the LDS ranch on the island, we came across this Pronghorn Antelope, the namesake of the island.

At the visitor center, we watched a video about the Great Salt Lake and Antelope Island. There are herds of Pronghorn Antelope, Buffalo, Mule Deer and flocks of various water related birds. 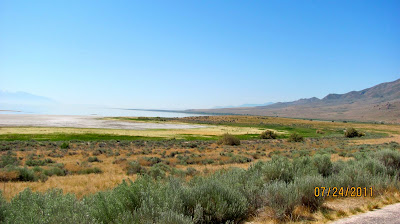 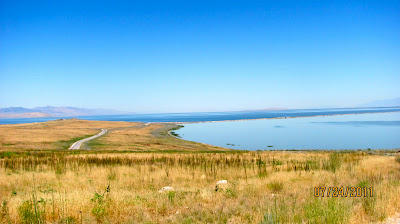 After eating our bag lunch at the public beach, we decided to walk down to the edge of the Great Salt Lake.We started our journey walking through a sandy beach and then a small desert of salt trying to ignore the awful smell of the lake. The ground looked brown instead of the white color of the salt. When we were close to the water's edge, the ground seemed to be moving. We discovered that those brown moving things were millions of insects called Brine Flies. We touched the water and then quickly headed back up the shore to escaped the Brine Flies swarming around our shoes and ankles. There were folks in the water in swim suits but we didn't like mingling with the hordes of flies even though they are harmless. 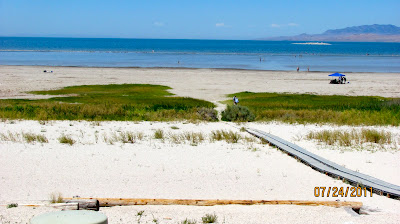 After leaving the state park, we took a ride through Layton and found my former high school from about 34 years ago when I lived on Hill A.F.B. We also found the building that housed the restaurant I worked at when I was 15-16 years old. Not much was familiar after so many years. My family only lived at the A.F.B. for a year.
Posted by Darren and Joyce Romero at 9:44 PM