Travel Day to BV from Durango via Wolf Creek Pass

June 7, 2011. Durango to Buena Vista, Colorado.
We got up early and finished our moving day preparations. The night before we had a spectacular mexican dinner prepared by our 4th of July hosts, Mark and Patty. Because we had a late dinner I didn't have as much put away as I had hoped. However, we still managed to pull-out by 8:30. Durango Year Round RV Park is very tight for big rigs. So, I ended up backing out of our pull-thru site towards the exit and angled it to get out.
We had about 230 miles to travel to Buena Vista, Co. and that included a couple passes the most infamous, Wolf Creek Pass just north of Pagosa Springs.
View Larger Map 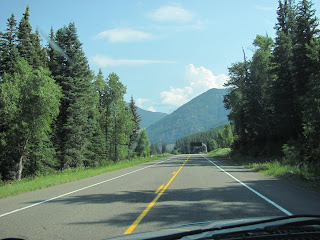 Wolf Creek Pass (el. 10,857 ft.) is a high mountain pass on the Continental Divide, in the San Juan Mountains of Colorado. It is the route through which U.S. Highway 160 passes from the San Luis Valleyinto southwest Colorado on its way to New Mexico and Arizona. The pass is notable as inspiration of aC. W. McCall song. Though not as formidable as the song made it seem, the pass is significantly steep on either side (7 to 8% in most places), and can be dangerous in winter.


The climb to the pass was steep and twisting. For the majority of the climb, I kept the truck in 3rd gear and the rpms between 2200-2500 rpms. This seemed to keep the Cummins Diesel running at normal temps and maintained plenty of power. We only climbed at just over 35 mph. However, that was within the speed limit and I wasn't blocking traffic as there was a climbing lane for the majority of the climb up. In fact only a few cars were going any faster! Actually there didn't seem to be much traffic over the pass.
We stopped at the summit at the kiosk display for The Great (continental) Divide. 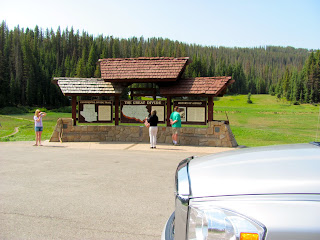 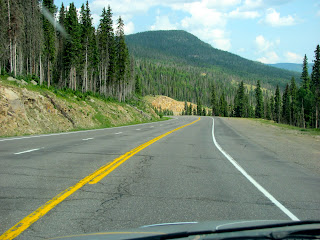 Traveling down from the pass is an adventure unto itself. I kept the Dodge in 3rd or sometimes 4th gear in Tow Haul Mode and the exhaust brake on (as always). The truck held the load of the trailer @ 35-40 mph down the twisty side of the mountain with an occasional use of the foot brake approaching the twisty turns. Again this was within the posted speed limits. I've heard tales of folks pulling trailers up and over the pass burning up their brakes on the way down. Today's modern diesel pickups have taken a lot of the braking concerns out of the equation.

After safely negotiating the pass, we continue east and then north towards BV. We climbed and descended Poncha Pass without incident.
Poncha Pass (9,010 ft/2,745 m) is a mountain pass in South-Central Colorado (USA). It lies between the San Luis Valley to the south and the valley of the Arkansas River to the north, and is one of the lowest mountain passes in the state [1]. It is in the saddle between the Sangre de Cristo Range, lying to the southeast, and the Sawatch Range, lying to the west and northwest. US Highway 285 runs over the pass, linking the towns of Alamosa to the south and Salida to the northeast. The small town of Poncha Springs lies about 6 miles (9 km) north of the pass. The pass has a mild approach on the northern side and a moderate 5% approach from the south, though it remains open all year round and does not normally cause problems for vehicles in winter.
We stopped for a quick bite to eat and a break in Poncha Springs. We could see storm clouds ahead of us to the north. After about 6 hours on the road and some light showers we pulled into Valley RV Park aka Mobile Valley RV Park. We had stayed in this park last year. 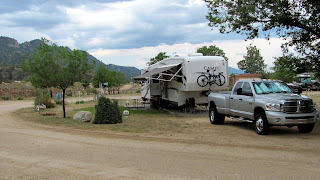 We were assigned site 29, perhaps the largest site in the park. A nice corner pull through site. 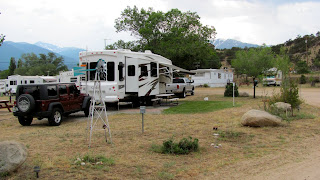 We got set-up and took these pictures just minutes before it rained. The first good rain that we have seen in months.
In fact, it rained again overnight! Gotta love Colorado!
We had a good uneventful travel day and I seemed to be getting good mileage out of the truck at over 10 mpg. Very acceptable considering the long climbs pulling a 15K+ fifth wheel.
Posted by Darren and Joyce Romero at 8:55 PM