The last few days have been busy and again I've fallen behind on the blog. The day after arriving we made our first trip into Glacier National Park via the West entrance which is only about 5 miles from North American RV Park.
On our first visit, we entered the park and stopped at the Apgar Visitor center which is really quite small. We picked up some maps and decided that we would treat ourselves later to a Red Bus Tour. So, we made a reservation for Labor Day on a 4 hour trip at $50 each. But, more on that later.
After making the reservation we decided to explore the park. We didn't want to take the scenic Going To The Sun Road as that would be our Red Bus Tour route. So we discovered the only off-road open to the public, the Inside North Fork Road which would take us by some of the lakes on the West side of the park. Apparently the road had just been opened last week according to a park employee.
The Inside North Fork Road is a narrow gravel and dirt road that travels north through the forests some of which had burned in a fire a few years ago. We traveled on this road for about 30 miles. 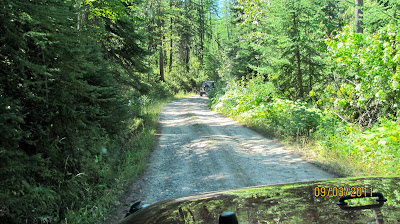 The Inside North Fork Road is the park’s oldest, built in 1901 when oil was struck near Kintla Lake. The Inside North Fork Road is a 28-mile narrow, bumpy, gravel road between Fish Creek and Polebridge, providing access to some of the park’s most pristine wilderness areas.
Recreational, towed, and low clearance vehicles are strongly discouraged from traveling this road. In ideal conditions, about two hours are needed to travel the whole road. Visitors may encounter downed trees, and therefore should have a hand saw or ax with them.   Drivers should also use caution on blind curves and watch for oncoming vehicle and bike traffic on the narrow winding road.
After a bumpy dusty trip in the Jeep, we left the park and made it to the very small town of Polebridge and found the Mercantile/ Bakery shop that folks in the park had raved about. We enjoyed some sandwiches and pastries before moving on. 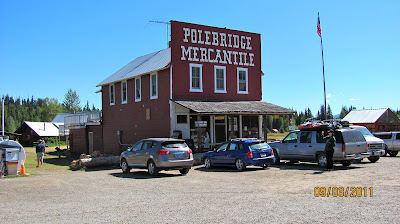 Polebridge Mercantile and Cabins. Open year-round. This unique outpost is located on the Inner North Fork Road, en route to the remote lakes of northwest Glacier National Park. Polebridge is located just outside of the park. The historic mercantile offers groceries and supplies, as well as fresh ground coffee and a variety of home-baked treats. Very inexpensive and very rustic "camper cabins" are offered with propane stoves and refrigerators, wood heating, and propane lights. Good way to access very beautiful and lightly traveled part of the park.
Back onto the bumpy dusty road and back through the remote park entrance gate and we traveled another 6 miles to Bowman Lake. We had thought that there wouldn't be many if any people at the lake but much to our surprise, the two or three parking lots were full and there was lots of activity around the lake.

The remote northwest corner of Glacier National Park, the area drained by the North Fork of the Flathead River, offers the adventurous visitor a chance to enjoy a wilderness experience away from the tourist crowds. The North Fork features forests of lodgepole and ponderosa pine with a series of small scenic lakes, Logging, the Quartz Lakes (lower, middle, and upper), Bowman, and Kintla. The jagged peaks of the Continental Divide form spectacular backdrops on the eastern ends of the lakes. Wildlife is abundant is the area. It is prime grizzly bear habitat.
We spent a full day at the park just driving around and checking out some of the lakes. By the time we got home we were exhausted and questioning whether our 4 days in this area would be enough. There seems to be a lot to do and see. So, we decided to extend for another day giving us a total of 5 days.
The next day, September 4, we decided to check out some of the local towns and do some grocery shopping. Paul drove us all in his truck and we toured Columbia Falls, and stopped for some shopping and a terrific lunch at Buffalo Cafe in Whitefish. Later we traveled to Kalispell which had a number of larger box stores to include a Super Walmart. We did some much needed grocery shopping and then headed home with yet another beautiful day in the bag.
September 6, Labor Day. We arrived for our appointment with the Red Bus at 2:15 p.m. at the Apgar Transit Center. We were the first to board so we got to pick our seat row. The driver Matt was a very pleasant recent Ohio State graduate. 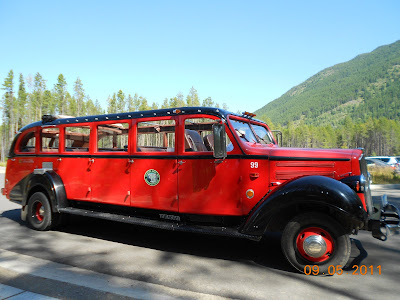 We made a couple more stops before filling the bus with guests. This particular tour would take us up the Going To The Sun Road to the Logan Pass Visitor Center and then back the same way. The trip was expected to take 4 hrs. 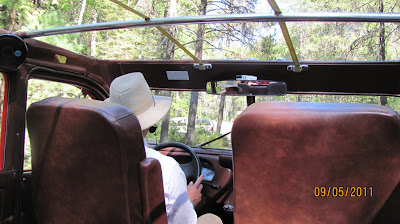 The buses used by the Red Bus Tour were built in the late 30's. Ours was built in 1937 and then rebuilt/ refurbished by Ford Motor Company in 1999 with a propane powered combustion engine and outfitted with an automatic transmission.
A quick stop at the McDonald Lodge to pick-up more guests and take a quick look around.
The White Motor Company between 1936 and 1939 built glacier’s red-with-black trim vehicles. This fleet of Red Buses is considered the oldest intact fleet of passenger carrying vehicles anywhere. These 17 passenger convertible touring sedans are more than a mere means of transportation for locals and visitors - they are cherished, elegant icons of Glacier National Park.
The bus trip was a lot of fun and provided great views of the high peaks through the open roof. The bus stopped at several locations along the route which allowed us to either get out and stretch our legs or stand-up and take pictures through the open roof.
At the summit of Logan Pass, we stopped at the visitor center and spent about 20 minutes taking pictures and looking around.

After leaving Logan Pass we returned back down Going To The Sun Road again making photo stops along the way. Overall, we each enjoyed the tour and learned a lot about the park. We would certainly recommend the tour.
Because we only drove to Logan Pass, we were still missing out on over half the park and the eastern side of the continental divide. Tomorrow, we plan to do a hike from Logan Pass.


Posted by Darren and Joyce Romero at 9:42 PM