March 25, 2010.
We awoke to a beautiful but, windy day here in the Texas Hill Country.  It quickly warmed to the low 70's but was still cool with the stiff winds. Around noon, we took a short trip out to Pedernales Falls State Park.  The drive out was beautiful with steep rolling hills along the two lane road. 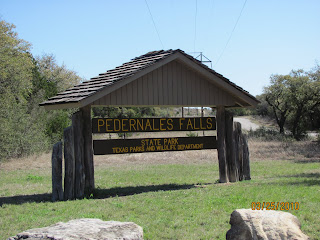 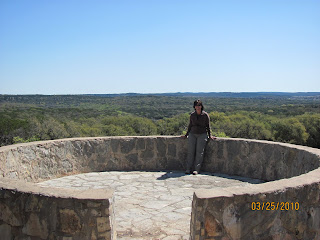 This is a shot of the main road within the park from the overlook. 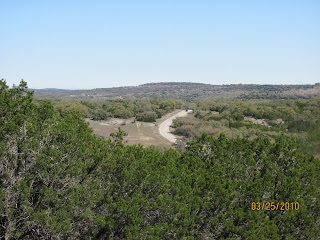 We drove to the campground in the park and took a quick look around. There were very few occupied sites. The fee for camping was $20 plus the daily entrance fee of $5 each per day. The sites were paved but were short. Many of the sites were sloped. We would not have fit in most of the sites. There are no sewer hook-ups just a dump station. There was however, some privacy between the sites and if the sites weren't so short it would be a nice campground.
We traveled to the end of the main road to the trail that leads to the namesake, Pedernales Falls. Apparently flash floods are a major concern on the river and falls area. Take a look at their website for some flash flood footage. There were plenty of signs around warning visitors to leave the area if the water started rising. 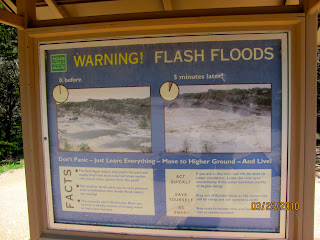 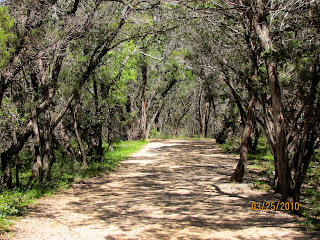 The scenic overlook provided a spectacular vantage point to see the Pedernales River and the falls. The sound of the falls was incredible. 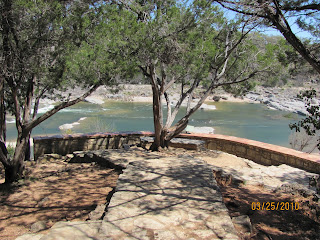 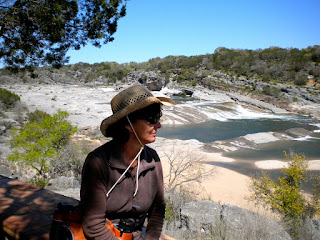 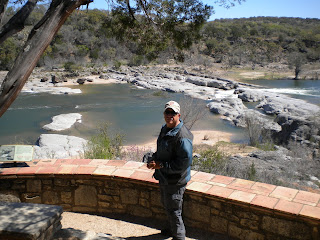 Perhaps not so much a falls in the traditional sense as most of the water seemed to slide down the rocks as opposed to dropping from several feet. However, there is a small traditional falls in the upper portion of the picture. I was told that through much of last year there wasn't any water flowing due to the severe drought they experienced. 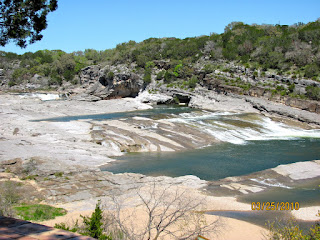 Down stream from the picture above. 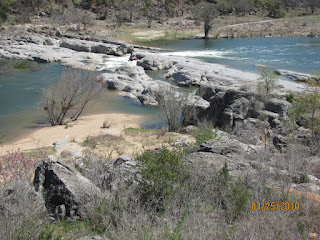 Further down stream from the picture above. 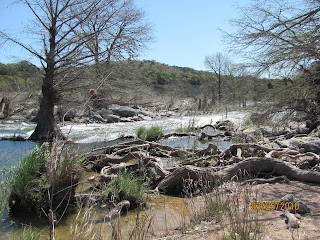 These pictures barely capture the beauty of the area. 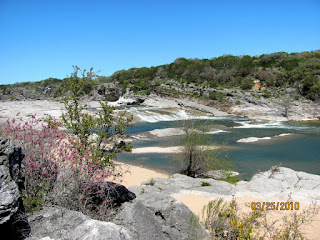 We walked out on the rocks in the river above the falls. Of course that was the area most susceptible to flash flooding. 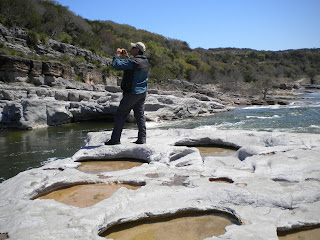 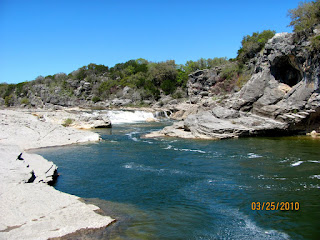 The climb back up to the parking lot was steep and we were feeling it. Joyce stopped to take a break! 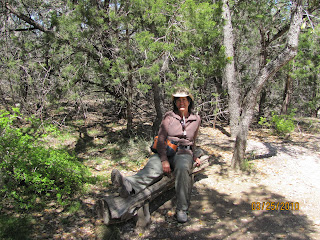 We traveled down the main road to the Swimming Area of the River. It also had an even steeper descent and climb from the parking lot to the river! You sure wouldn't want to forget anything and have to hike back to the car! The river was moving pretty fast through this area but it's probably only 4-5 ft. deep with lots of rocks and boulders. The water was so clear and cold at about 65 degrees.  It's not like the leaf stained tea colored water we see in Florida and southeast rivers. 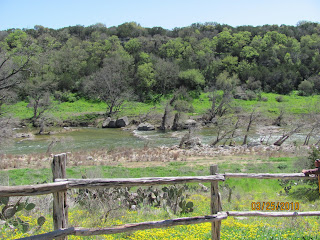 We got back home and cleaned up the rig and rested before grilling out for supper. We had some long enjoyable curbside chats with some of the other folks staying in the park. Everyone is very friendly. Most have been here before and plan to keep coming back. A few of the couples really enjoy traveling as much as an hour or two away to see different sights and view the beautiful hill country. We keep getting new ideas of places to go and things to see!
Posted by Darren and Joyce Romero at 2:20 PM