The morning of June 5th started out bright and sunny with temps in the 80's but pleasant at 7:00. Mi Primo, Donnie Gonzalez who was camping next to us was making breakfast for anyone that wanted it. I was still full from the night before so I chose to just sip on my morning juice!


Before long it was warming rapidly in the bright New Mexico sun. Donnie invited us all down to the lake shore where he would launch his boat and give us a ride around the lake.


Once out on Elephant Butte Lake we began cruising around enjoying the scenery with Primo Donnie at the helm. 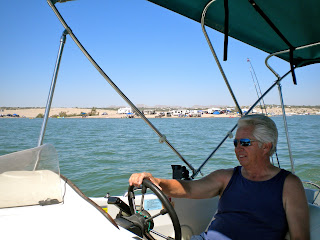 Elephant Butte Lake also known as Elephant Butte Reservoir was created by a dam on a portion of the Rio Grand River. It's believed that my Grandfather worked on the construction of the dam as a migrant worker. 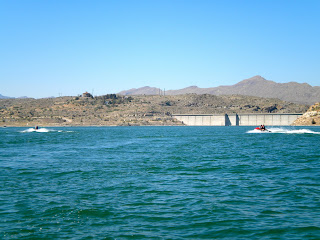 The lake/ reservoir's namesake is this butte known as Elephant Butte, because from a distance it looks like an elephant lying down with its head to the right in the picture below. 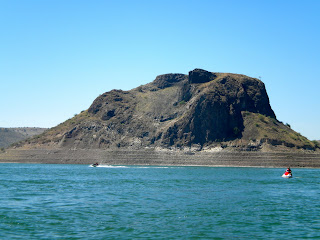 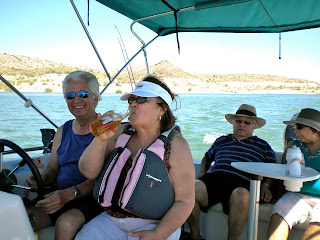 Before long everyone including Joyce was under the awning in the shade which left the entire bow to me and the sun. Karen and my Father relaxing on the bow before they moved under the awning. 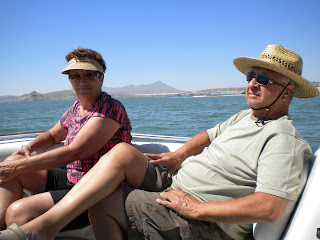 After about two hours in the boat, it was time to head to shore. We retired back to our rigs to escape from the sun and the heat. The temperature soared to around 105 degrees.
Later in the evening we returned to the lake shore where Primo Donnie and his buddy Lorenzo and friends had smoked some ribs, chicken and pork. We all sat around eating and telling tall stories till once again it was time to retire. I remember checking my watch and noting that at 9:00 p.m. it was still 92 degrees outside, yet bearable.
The miserable heat wave that we are enduring has made us re-examine the idea of staying here in this area for a week. It's so hot during the afternoon that the sand burns Maggie and Rico's feet when they go out to relieve themselves. We've decided to press on to Albuquerque, NM. on Monday.
Our rig is managing to keep us cool. Our campsite is not shaded, yet our main a/c can keep us at 76-78 during the hottest part of the day with the assistance of the bedroom a/c.  We can cool the bedroom to below 60 if we wanted too.  It's sure nice to take a nap in the cool bedroom during the worst heat of the day. However being forced to seek shelter inside during the day is no fun.
Posted by Darren and Joyce Romero at 9:15 PM