June 19, 2010.
Another beautiful morning with cool temps and bright sunshine. We got a late morning start but decided to pay a visit to Salida, Colorado about 24 miles south. Salida was hosting it's annual FIBArk festival over the weekend and everyone said it was worth checking out.


FIBArk stands for "First in Boating the Arkansas" -- it's a festival that started in the 1950s. The history actually began in 1949 when two friends bet each other who'd win a race from Salida, CO to Cañon City, CO on the Arkansas River. Since that race almost killed both contestants in subsequent years the race was shortened to about 26 miles of whitewater from Salida, CO to Cotopaxi, CO. It became a community-wide festival that serves as homecoming from many who have moved away. Today the festival draws over 10,000 people yearly, around the 3rd week of June, and includes a variety of events on the river and in town.
FIBArk features many events such as boating, music, attractions for children, and a small amount of shopping. Some bands from Salida's area perform on a local amphitheater. There are many boat races, including the Hooligan race, which is a race where people make boats out of anything they can find, and race them down the Arkansas. Some of them sink, some of them float, but everyone agrees that it's fun. The children's attractions feature inflatable slides and obstacle courses as well as one or two motorized rides. Some vendors in the area set us small stalls to sell their wares in the park that borders the Arkansas.


We arrived downtown and after some searching for a parking space, we found a field with parking for $5. We then walked pased rows of vehicles with kayaks toward the Arkansas River where the FIBArk festivities were in full affect. 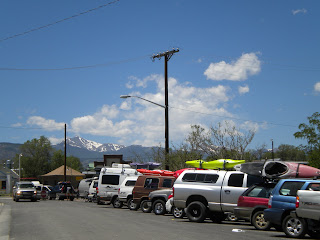 At the river, folks were gathered along the banks to watch the various kayak races and events. 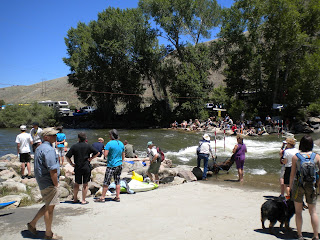 We stopped to watch a few races. 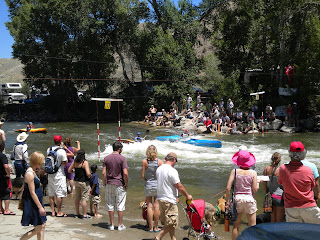 These races were preliminary races for the main events. 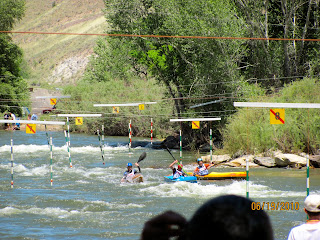 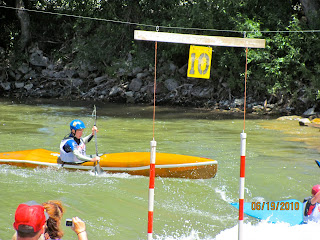 A pretty good crowd, but I'm sure the crowd swells when the main event races take place. 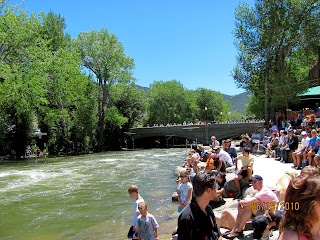 There was live entertainment in the park on the banks of the river. 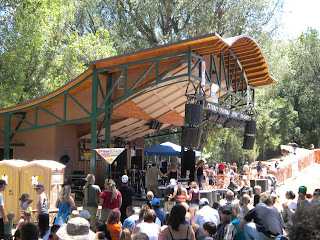 We took a walk in down town Salida after enjoying the river front festivities.
The City of Salida is a Statutory City that is the county seat and most populous city of Chaffee County,Colorado, United States.[5] The population was 5,504 at the U.S. Census 2000.
The town's name is pronounced /səˈlaɪdə/ sə-LYE-də in English and [saˈliða] ('exit') in Spanish.
Founded in 1880, Salida was originally a railroad town and was a significant link in the Denver and Rio Grande Western Railroad. After World War II the railroad began pulling back its operations in Salida. Many residents in the 1950s, 1960s, and 1970s worked either in local ranching operations or commuted north to Leadville to work at the Climax Molybdenum Company. Today the most prominent business in Salida is tourism, consisting of skiing at Monarch ski area, whitewater rafting, kayaking and outfitting, particularly on the Arkansas River. Salida is home to the annual FIBArk kayak race, one of the oldest whitewater races in North America. 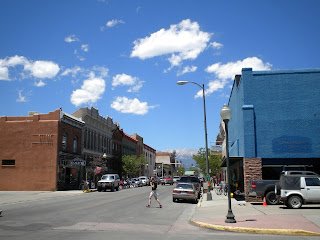 It was interesting to see how friendly the towns and Colorado in general appear to be towards cycling and dogs! 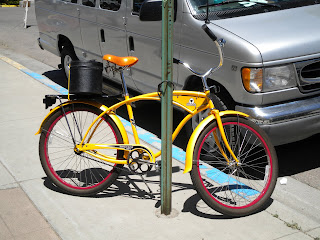 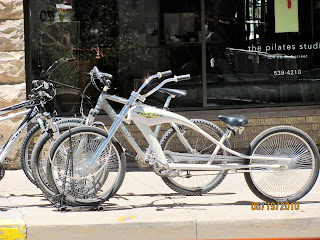 After walking through the town and enjoying the FIBArk activities, we decided it was time to make a trip out to Walmart in town. After that we called it a day.
Posted by Darren and Joyce Romero at 9:56 PM

Email ThisBlogThis!Share to TwitterShare to FacebookShare to Pinterest
Labels: Colorado