June 21, 2011 Santa Fe, New Mexico Trailer Ranch Rv Park.
We woke to cool temps this morning in the lower 50's. It was in the low 60's in the bedroom which meant it was chilly and thus required a little 'sleeping in'. Later I walked Maggie and Rico and came across a Red Fox that was hanging out by one of the buildings. Other passer-bys told me it has kits (pups) under a nearby shed. I was amazed that it didn't seem concerned with us even though we were perhaps only 15 yds. away.
By 10:00 we were ready to get out and catch the city bus right outside of the RV Park. We took the bus for about a 20 minute ride into the "Plaza" where it dropped us off below.
We were totally into doing the 'tourist thing' and just strolling along window shopping and taking pictures. 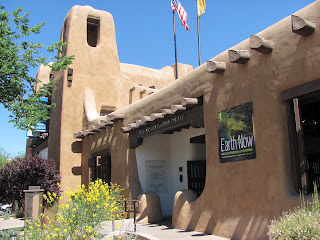 We both really love the Santa Fe style architecture. 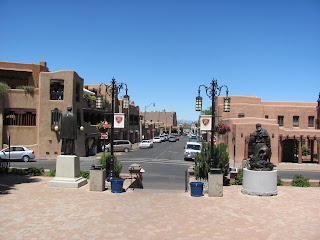 We had lunch at a local tourist hot spot: Cafe Pasqual's. It was recommended by the RV park and circled on our map. I gotta tell ya, we weren't impressed. We found it cramped, expensive and the food wasn't exceptional. Just our opinion!
When Route 66 was first laid out in 1926, everybody knew it would go through the capital of New Mexico and indeed it did. Route 66 followed the Old Pecos Trail from Santa Rosa through Dilia, Romeroville and Pecos to Santa Fe. From Santa Fe it went over La Bajada Hill and down into Albuquerque. That was the way it was aligned and constructed and that was the way it was supposed to stay - forever. But it didn't. But why was it moved? In 1937 the then governor of New Mexico, Governor Hannett lost the re-election. Hannett blamed this on the politicians in Santa Fe. In one great last act of defiance before the new governor was sworn in he vowed to get even with this Santa Fe ring. He had until January to institute his revenge. And he did! He decided the best way to get even was to re-route Highway 66 to Albuquerque and bypass Santa Fe altogether. This new alignment would bypass the Santa Fe businesses and Santa Fe politicians. It was a race against time. With no time off for the workers, including Christmas, he had to build a road through the virgin landscape fighting the elements, the vegetation and anybody and anything that got in his way. There was no time to buy the right a way so the road cut across both public and private land with no regard for the ownership. Though the road was not quite finished by the time the new governor took office in January, bad weather conditions prevented him from contacting the work crews to stop the project. By the time the new governor met with the work crews it was too late. The new road had been finished and cars were already driving the new route that cut off more than 90 miles of driving distance between Santa Rosa and Albuquerque. Santa Fe had been bypassed! The new alignment was really a better route from an engineer's standpoint. It was a more direct route that cut out some treacherous road conditions. It was also quite a bit shorter. This is the route that would be followed by the new Interstate years later. Now you know the whole story!
The current La Fonda, built in 1922, sits on the same site as previous inns, literally at the terminus of the Santa Fe Trail and the Plaza – a haven for travelers for more than 400 years!

In 1925, the new building was acquired by the Atchison, Topeka & Santa Fe Railway and then leased to Fred Harvey who was renowned for his hospitality. He turned La Fonda into one of the famous Harvey Houses and it remained a Harvey House until 1968 when it was acquired by local businessman, Sam Ballen
Originally constructed in the early 17th century as Spain's seat of government for what is today the American Southwest, the Palace of the Governors chronicles the history of Santa Fe, as well as New Mexico and the region. This adobe structure, now the state's history museum, was designated a Registered National Historic Landmark in 1960 and an American Treasure in 1999.
Built in 1931, The Lensic is more than a theater to the people of Santa Fe. For most of the 20th century, the venue was a place for a first kiss in the balcony, a grand silver screen in the midst of the Depression, a vaudeville venue where the community could see the singers, actors, dancers and comedians of the day. It was a place where magic happened.
The theater was in danger of becoming an empty house of over 800 seats when in 1999 a vision for a world-class performing arts center was birthed. It was time for a new chapter in the venerated theater’s life.
Thanks to a group of dedicated individuals who saw the potential for the venue and the future benefit for Santa Fe, the renovation and refurbishing of the old theater began in 2000 with gifts from individuals, local businesses, the city and foundations.
In April 2001, the Lensic Theater once again opened its doors to the people of Santa Fe as a nonprofit: The Lensic Performing Arts Center, a place where magic still happens, over 250 nights a year. 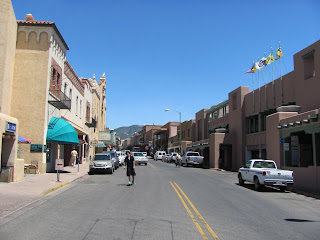 The Georgia O'Keeffe Museum Research Center, a component of the Georgia O'Keeffe Museum, Santa Fe, New Mexico, sponsors research in American Modernism (late nineteenth century to present) by awarding stipends to historians in the fields of art, architecture and design, literature, music and photography and to museum professionals who wish to organize an exhibition at the Georgia O'Keeffe Museum.
The Georgia O’Keeffe Museum Research Center opened in July 2001 as the only museum-related research facility in the world dedicated to the study of American Modernism (late nineteenth century – present)
We spent several hours walking around the Old Plaza District of Santa Fe before taking the bus back to the rv park. It was a fun day. However, I learned that my sciatic nerve issue with my right hip from my fall a few weeks ago isn't completely healed. Several times during our walk it would flair up and then mysteriously go away again. I sure hope this doesn't become a chronic issue.
Later in the evening I took the truck out to fill it up with diesel in preparation for leaving Thursday morning. Searching for the cheapest diesel, I used the Gas Buddy website to locate a fuel station. So I drove off in search of the station which lead me to a rather poor section of town and up a dirt road under construction. I made it to the station only to discover that it didn't sell diesel in contradiction to my research! So I tried another station that was hard to get into because of construction on the road only to learn that they would only take cash because they just opened and didn't have credit card machines. So I gave up, I went to the station on the main drag and paid $4.059 per gallon, the most I've paid to date.
Tomorrow we will just do some domestic shopping and make preparations to move on to Colorado.
Posted by Darren and Joyce Romero at 10:05 PM