Trip from Durango to Silverton on Hwy. 550.

June 28, 2011 Durango RV Park.
WARNING!  Lots of pictures!
Today we took a trip from Durango to Silverton with our friends Paul and Paula in the Jeep.

View Larger Map
This was an amazingly beautiful drive of about 130 miles round trip. 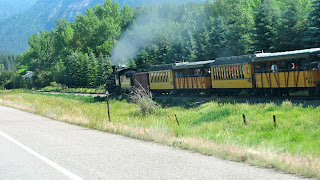 We passed the Durango & Silverton Narrow Gauge Railroad as we traveled on Hwy. 550. Collectively we had decided that the train ride was too expensive for our tastes. And driving was much faster although not as nostalgic. 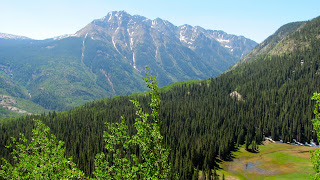 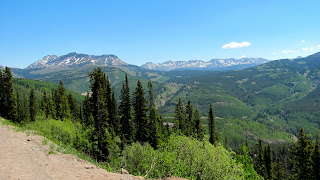 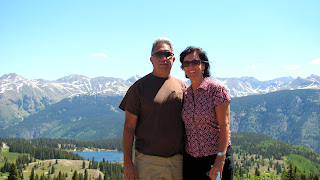 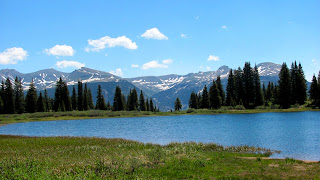 We took a Forest Service road to Molass Lake where we got out and enjoyed the cool breezy temps.
We made several photo stops as we traveled up the mountains.
Joyce and I had visited Silverton last year but drove down via the "Million Dollar Hwy from Ouray.
Silverton is a former silver mining camp, most or all of which is now included in a federally designatedNational Historic Landmark District, the Silverton Historic District. The town population was 531 at U.S. Census 2000.
According to the United States Census Bureau, the town has a total area of 0.8 square miles (2.1 km²), all of it land. Silverton is one of the highest towns in the United States, at 9,305 feet (2,836 m) above sea level.Notorious Blair Street was home to 32 saloons, gambling halls and houses of ill-repute in a three-block stretch. Often the first building in a mining camp was a saloon. If not, it was certainly the second! Among their colorful names were the Mikado, the North Pole and the Laundry, where they "cleaned you out." Gamblers, such as Bat Masterson and Wyatt Earp, played faro within their walls.

From its earliest days, the street was infamous for its loud music and dance halls. In fact, the people on the south end of Blair Street were so mortified by its reputation, that they petitioned the Silverton town council to have their end of the street renamed Empire Street. Although illegal, gambling and prostitution were tolerated in the early days in Silverton, as long as the "ladies" stayed behind an invisible line in the middle of Greene Street, separating them from the more respectable part of town.
We ate lunch at Handlebars Restaurant and Saloon for lunch. Three of us had burgers (Elk, Bison and Portabello) that were just average and overcooked.
Before leaving the Silverton valley we decided to take a ride up a dirt road to Kendall Mtn.
Kendall Mountain is a mountain summit in San Juan County in the state of Colorado (CO). Kendall Mountain climbs to 13,274 feet (4,045.92 meters) above sea level.
I drove up the road until the clamor from the the back seat drivers got so loud that it was in my best interest to turn around. The road was becoming increasingly narrow, rocky and sketchy. So, Paul spotted as I did a 3-point turn to get turned around. The road was so steep that I put the Jeep in 4-low to keep from riding the brakes on the way down. 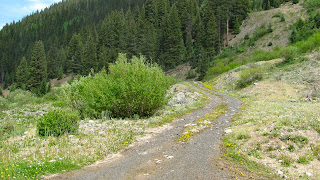 We came across this dirt road with water running down it (above) like a small stream. We guessed that it had to be snow melt. 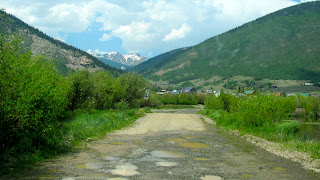 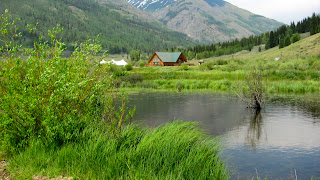 We had planned to do some more Jeeping on the Alpine Loop trails around Silverton but we ran out of time and the backseat drivers probably didn't have the stomach for it! We all had to get back to our dogs. We had been away for almost 8 hours by the time we got home.
We had a great time and took way to many pictures as the area is just breathtakingly beautiful...even the second time around!
Posted by Darren and Joyce Romero at 7:16 PM