July 17, 2010.
Today we had plans to travel to Ouray and then take the Million Dollar Highway over the Red Mountain Pass to Silverton.
U.S. Route 550 is a spur of U.S. Highway 50 that runs from Bernalillo, New Mexico to Montrose, Colorado in the westernUnited States. The section from Silverton to Ouray is frequently called the Million Dollar Highway.
This is the first tunnel encountered traveling south from Ouray. It has a posted hight of 13' 9". 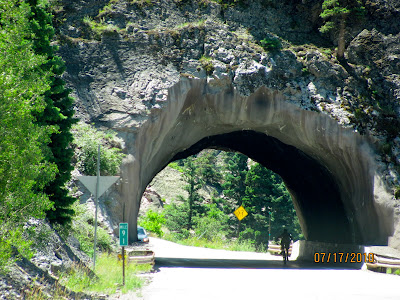 The Million Dollar Highway stretches for about 25 miles (40 km) in western Colorado and follows the route of U.S. 550 between Silverton and Ouray, Colorado. It is part of the San Juan Skyway Scenic Byway. Between Durango and Silverton the Skyway loosely parallels the Durango and Silverton Narrow Gauge Railroad.
You can see the road cut into the side of the mountain like a shelf road. The Million Dollar Highway stretches for about 25 miles (40 km) in western Colorado and follows the route of U.S. 550 between Silverton and Ouray, Colorado. It is part of the San Juan Skyway Scenic Byway. Between Durango and Silverton the Skyway loosely parallels the Durango and Silverton Narrow Gauge Railroad. Uncompahgre Gorge to the summit of Red Mountain Pass which gains the highway its name. This stretch through the gorge is challenging and potentially hazardous to drive; it is characterized by steep cliffs, narrow lanes, and a lack of guardrails; the ascent of Red Mountain Pass is marked with a number of hairpin "S" curves used to gain elevation, and again, narrow lanes for traffic—many cut directly into the sides of mountains. During this ascent, the remains of the Idarado Mine are visible. Travel north from Silverton to Ouray allows drivers to hug the inside of curves; travel south from Ouray to Silverton perches drivers on the vertiginous outside edge of the highway. 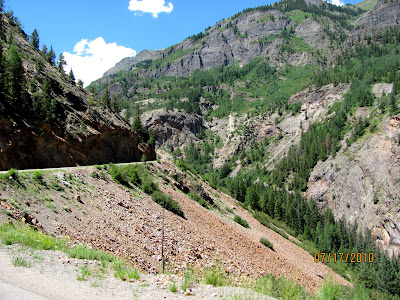 The original portion of the Million Dollar Highway was a toll road built by Otto Mears in 1883 to connect Ouray and Ironton.[1] Another toll road was built over Red Mountain Pass from Ironton to Silverton. In the late 1880's Otto Mears turned to building railroads and built theSilverton Railroad north from Silverton over Red Mountain Pass to reach the lucrative mining districts around Red Mountain, terminating at Albany just eight miles (13 km) south of Ouray. The remaining eight miles (13 km) were considered too difficult and steep for a railroad. At one point a cog railroad was proposed, but it never made it beyond the planning stage. 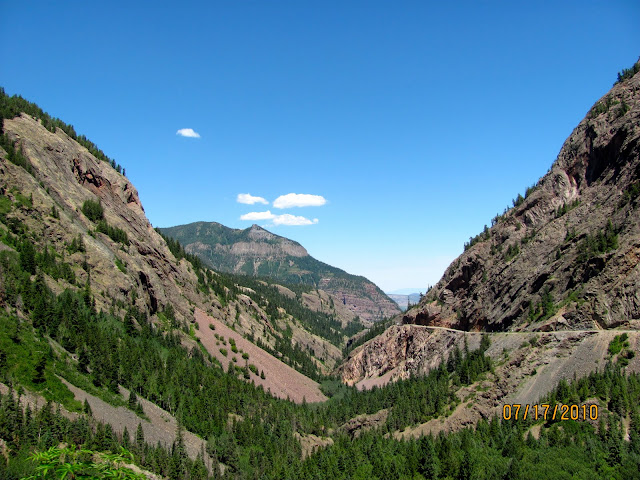 In the early 1920's, the original toll road was rebuilt at considerable cost and became the present day US 550. The Million Dollar Highway was completed in 1924.[3] Today the entire route is part of the San Juan Skyway Scenic Byway.
On the ascent we were on the exposed outer edge of the highway with no shoulder or guard rails. We noted in some spots the edge of the road appeared to have broken off into the canyons below. 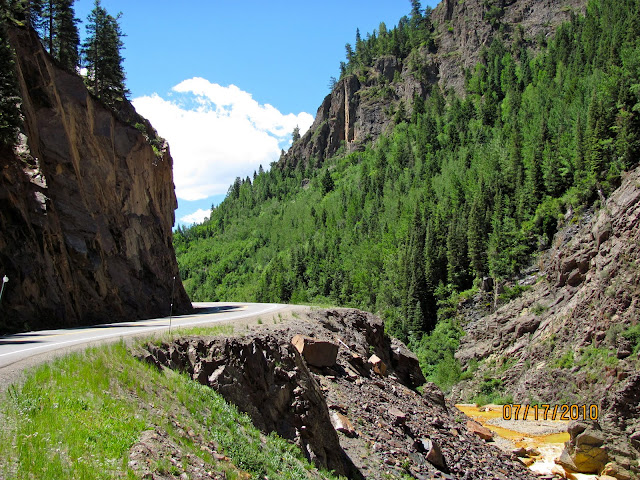 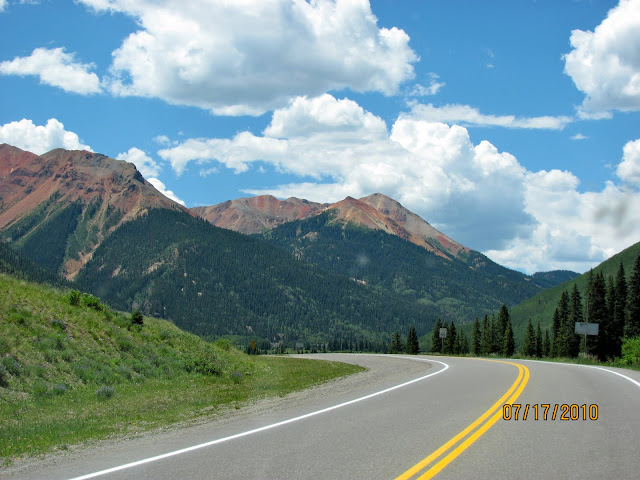 The namesake for the Red Mountains. 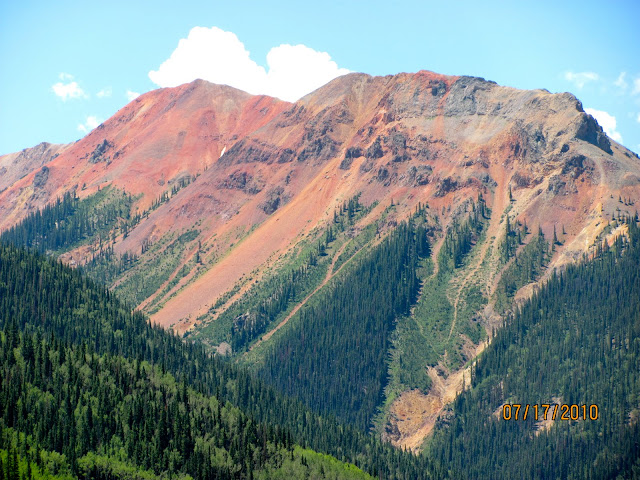 We stopped to take pictures and catch our breath after ascending out of Ouray. I didn't like driving it in the Jeep. I would not even consider taking our RV. 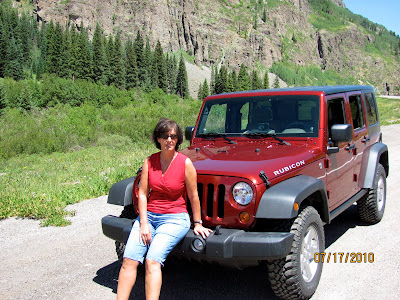 Looking at red mountain over the remains of a mine. 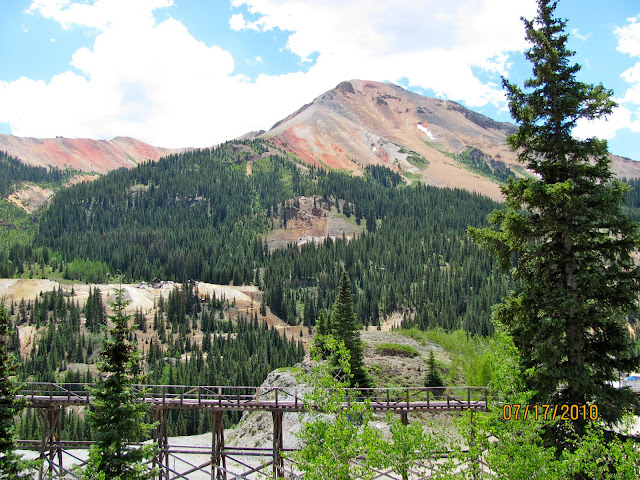 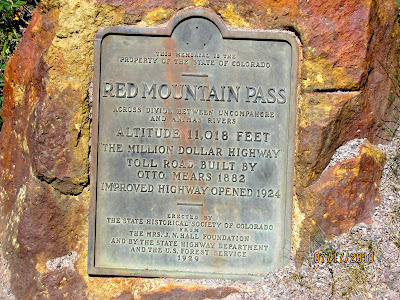 The descent into Silverton was steep but not as bad as the ascent as we hugged the mountain walls on the way down. 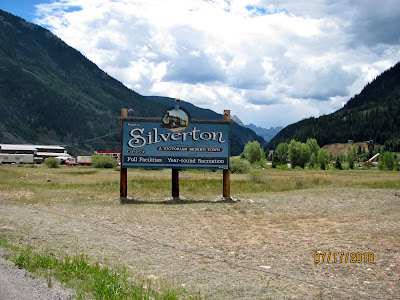 Only the main road (Hwy 550) through Silverton is paved. The side streets are dirt. 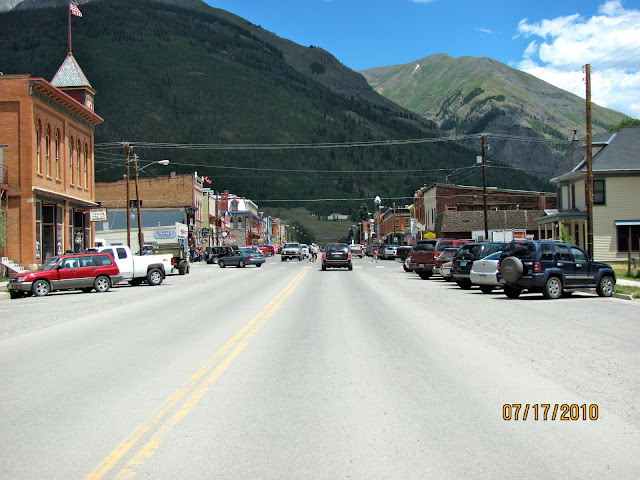 One of the wide dirt side streets lined with tourist shops. 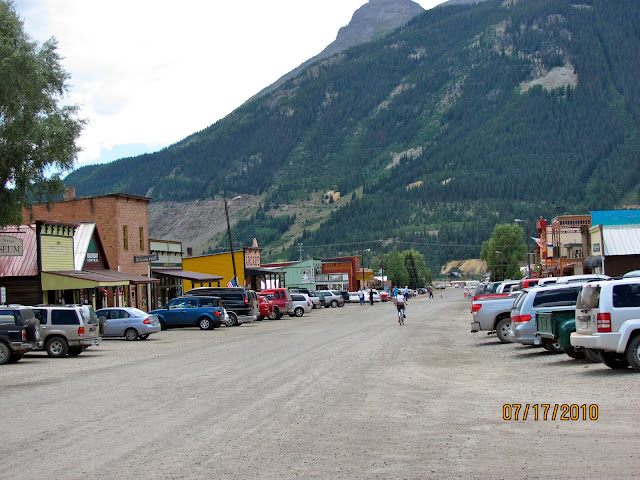 We came across the ROMERO'S Restaurant and Cantina on Main Street and decided it was the proper place to have lunch. 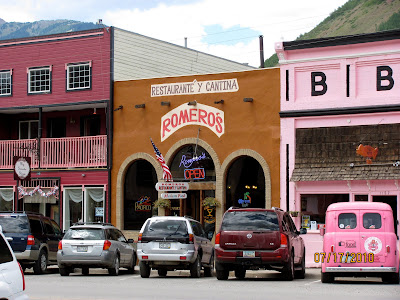 A shot down Mainstreet. 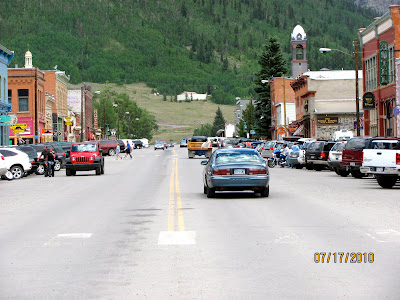 The Town of Silverton is a Statutory Town that is the county seat of, and the only incorporated municipality in, San Juan County, Colorado, United States.[8] Silverton is a former silver mining camp, most or all of which is now included in a federally designatedNational Historic Landmark District, the Silverton Historic District. The town population was 531 at U.S. Census 2000 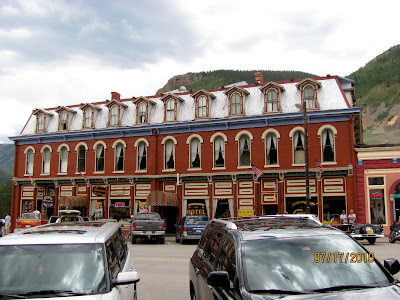 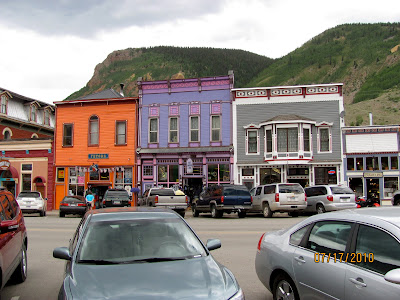 I wanted to take a dirt road and Jeep trail out of Silverton. 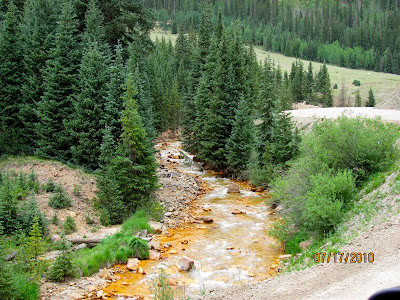 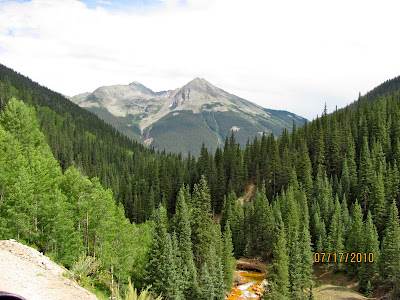 Once we left the dirt road the trail turned up along a rocky single lane shelf road. We started ascending then thought it was a bad idea as we couldn't tell if anyone was coming down and there wasn't enough room to pass. So with Joyce's help we got turned around and abandoned the idea. 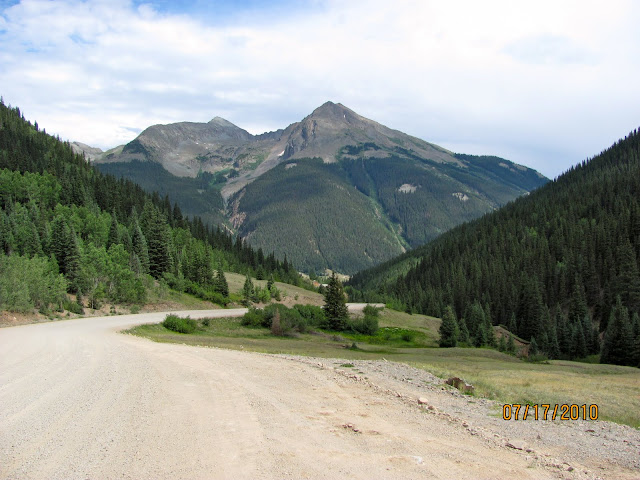 From the dirt road we were able to look down on the town of Silverton. 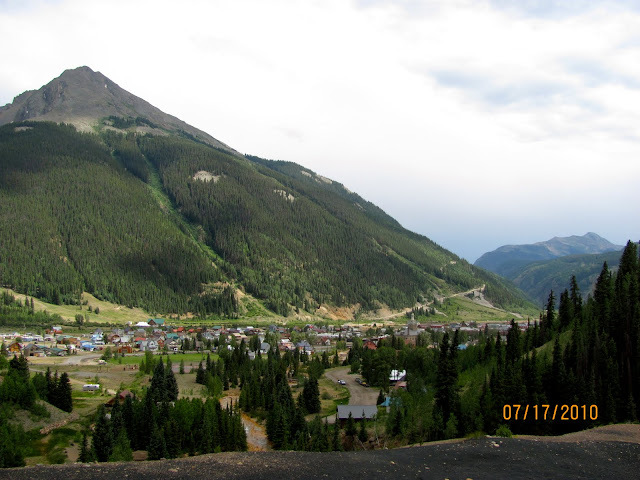 After leaving Silverton, we were headed back to Ouray via the Million Dollar Highway. 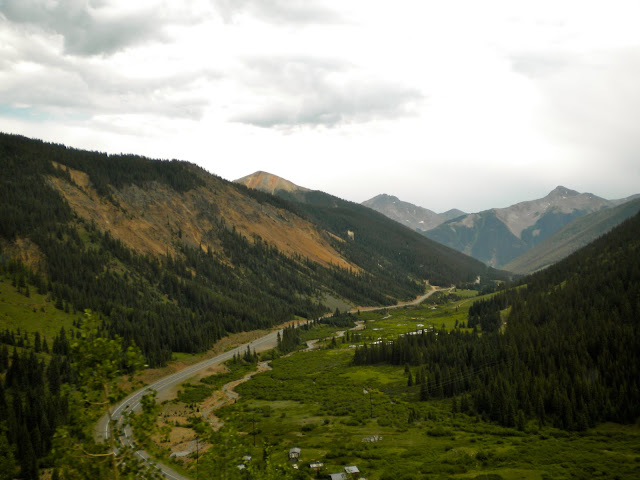 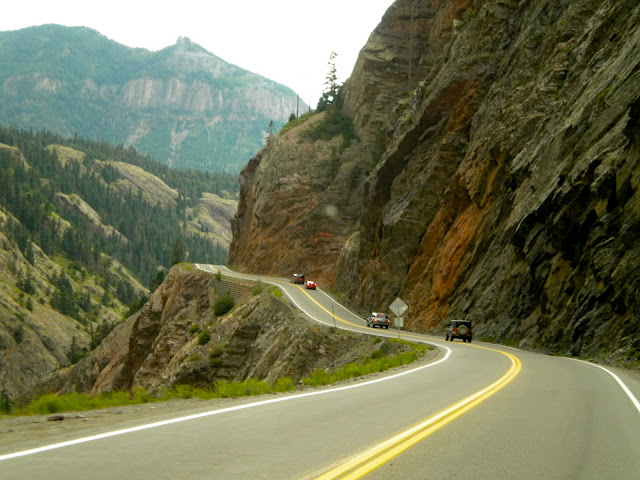 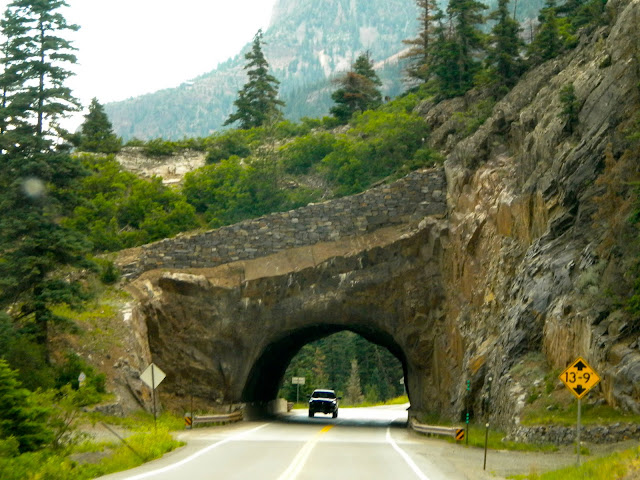 On our return descending into the town of Ouray. 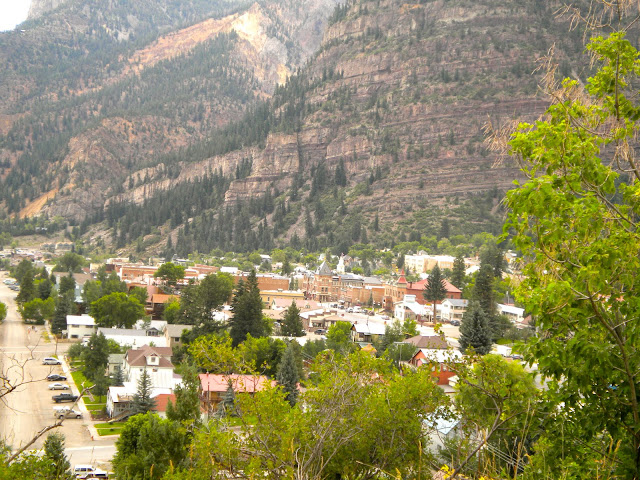 Posted by Darren and Joyce Romero at 5:35 PM