Hike in Black Canyon of the Gunnison National Park 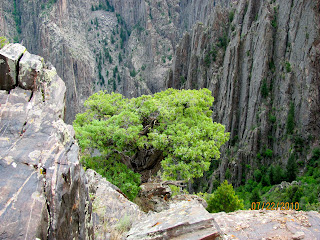 The weather cleared overnight here in the Montrose Valley of Colorado. We awoke to cool and overcast morning. A perfect morning to go hiking. We had planned to get up early i.e. 7:00. but, we slept till 9:00! So we got off to a late start with no one to blame but ourselves.
We walked the dogs and got our Camelbacks loaded and hit the road for the 25 mile drive to the Black Canyon of the Gunnison. We took off on the Rim Rock Trail. 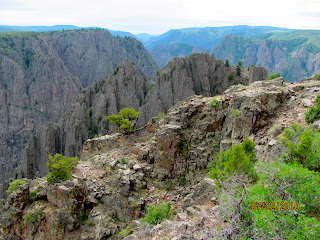 The Rim Rock Trail does exactly as it sounds, it follows the south rim of the canyon allowing for breathtaking views. 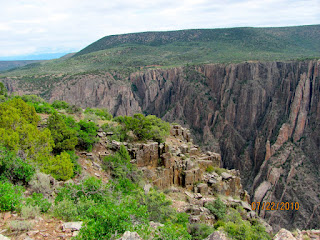 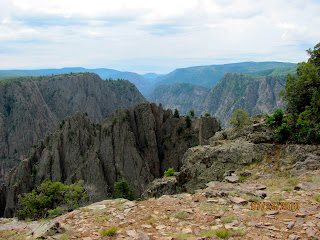 There are plenty of photo opportunities and we took a lot of photos. Somehow, the pictures can't capture the depth and beauty of the canyon. 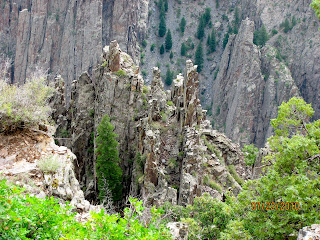 The trail was rocky and filled with some up and down elevation changes. The trail itself is at 8000 ft. 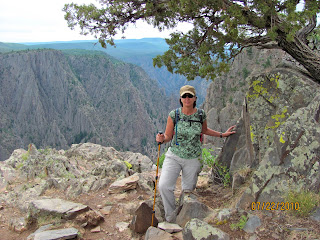 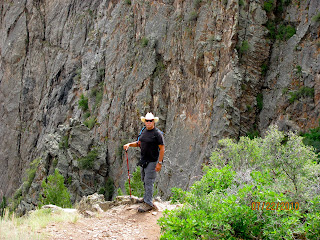 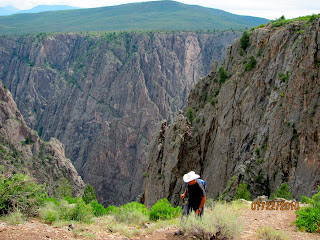 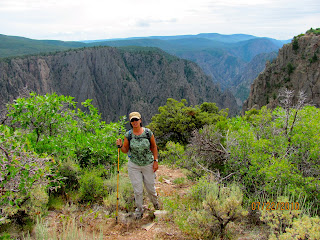 After completing the Rock Rim Trail, we did a portion of a steeper trail, the name of which escapes me. We had a great time coupled with some good exercise. We were finished after just a few hours and headed back home but not before stopping in Montrose to buy some corn. The first harvest of Olathe Sweet Corn is being sold out of the bed of pick-up trucks in town. It's such a mainstay of the community that they have an annual sweet corn festival. We had heard that it's some of the best corn you'll ever taste. So we bought a half dozen ears (they were small).
Back home it was still cool and overcast so I decided it was a perfect time to get up on the roof of our Carriage Cameo fifth wheel to do the annual A/C maintenance which consists of blowing out the evaporator coils. So I got out the air compressor, started it up on the ground and pulled the hose up to the roof. I pulled both A/C covers off and thoroughly blew out all the leaves, sticks and debris hidden inside. I then focused the compressed air on the coils making sure they were cleared of dust and dirt.
With that job done it was soon time to boil the corn and have dinner. I gotta tell ya, the corn was fabulous! We will be getting more!
Posted by Darren and Joyce Romero at 9:28 AM