July 10, 2010.
We awoke to another beautiful day in Colorado's "Banana Belt". Of course our day started off with a morning walk of Maggie and Rico. Today we made plans to travel to Leadville. So we loaded up in the Jeep and headed out around 11:00. Traveling north into Leadville, we could see Mt. Massive in the distance. 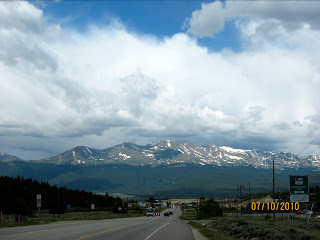 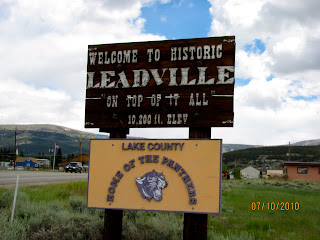 The Leadville Historic District was designated a National Historic Landmark District in 1961. It includes 67 mines in the mining district east of the city up to the 12,000 foot (3658 m) level, and a defined portion of the village area, with specific exclusion of various buildings. Principal historic buildings in the district are: Tabor Grand Hotel, St. George's Church, Annunciation Church, Tabor Opera House, City Hall, Healy House, Dexter Cabin, Engelbach House, and Tabor House, as well as mining structures and small homes. Structures built after 1917 are considered non-contributing. 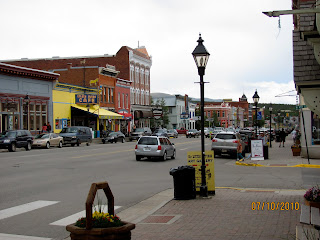 Leadville is a Statutory City that is the county seat of, and the only municipality in, Lake County, Colorado, United States.[4] Situated at an elevation of 10,152 feet (3094 m), Leadville is the highest incorporated city and the second highest incorporated municipality in the United States. A former silvermining town that lies near the headwaters of the Arkansas River in the heart of the Rocky Mountains, the city includes the Leadville Historic District, which preserves many historic structures and sites from Leadville's dynamic mining era.
We stopped for lunch at the Hotel Delaware, 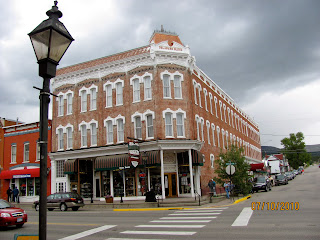 In the late 1800s, Leadville was the second most populous city in Colorado, after Denver. The United States Census Bureau estimates that the city population has shrunk to only 2,688 in 2005. 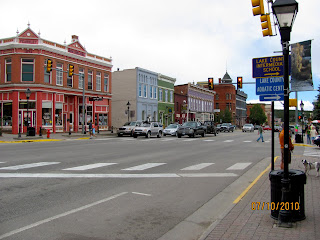 Placer gold was discovered in California Gulch in 1860, during the Pikes Peak Gold Rush, and the town of Oro City sprung up near present-day Leadville. The boom was brief, and Oro City never became a major settlement. The placer gold mining was hampered by heavy brown sand in the sluice boxes.

In 1874, gold miners at Oro City discovered that the heavy sand that impeded their gold recovery was the lead mineral cerussite, that carried a high content of silver. Prospectors traced the cerussite to its source, and by 1876, had discovered several lode silver-lead deposits. The city of Leadville was founded near to the new silver deposits in 1877 by mine owners Horace Austin Warner Tabor andAugust Meyer[6] , setting off the Colorado Silver Boom. By 1880, Leadville was one of the world's largest silver camps, with a population of over 40,000. 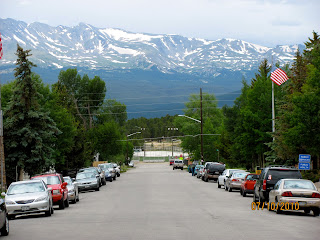 Confederate scout, cowboy and stage actor with "Buffalo Bill" Cody's travelling revue, Texas Jack Omohundro died here in the summer of 1880, of pneumonia, one month before his 34th birthday. He was living there on a small estate with his wife, ballerina Giuseppina Morlacchi. It was during this period that Leadville saw its most dangerous days, finally brought under control by little-known American Old West lawman Mart Duggan.
In 1882, the Tabor Opera House hosted Oscar Wilde during his lecture tour, one of many celebrities who graced the city. Mayor David H. Dougan invited Wilde to tour the Matchless silver mine and open their new lode: "The Oscar." Wilde later recounted a visit to a local saloon, "where I saw the only rational method of art criticism I have ever come across. Over the piano was printed a notice – 'Please do not shoot the pianist. He is doing his best.'"
Around 1883, outlaw Doc Holliday moved to Leadville, shortly after the gun fight at the O.K. Corral. On August 19, 1884, Holliday shot ex-Leadville policeman, Billy Allen, after Allen threatened Holliday for failing to pay a $5 debt. Despite overwhelming evidence implicating him, a jury found Holliday not-guilty of the shooting or attempted murder.
We walked along the historic district for a couple hours. It started drizzling and then raining. The temperature was a cool 48 degrees! 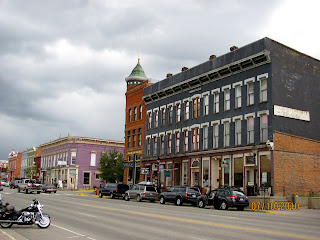 We drove south out of Leadville in the rain admiring the distant cloud covered mountains. 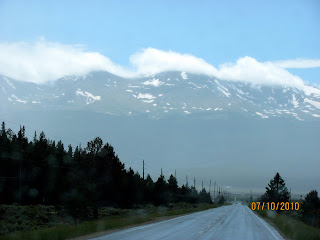 The weather cleared and we were once again under bright sunny skies. We decided to take a side trip on Highway 82 towards Twin Lakes. 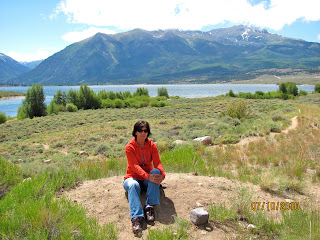 After checking out the beautiful lake and scenery, we decided to continue our trip and travel up to Independence Pass. 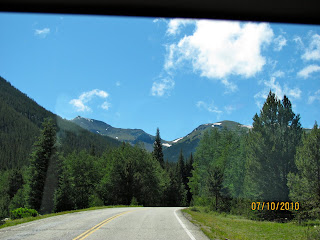 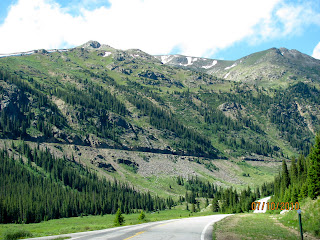 We stopped in a mountain valley to watch some fisherman fly fishing in the stream. 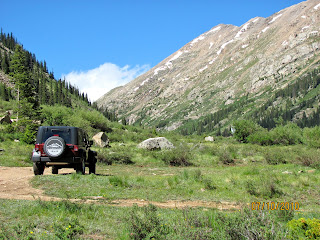 There were several switchbacks on the way up to the pass. 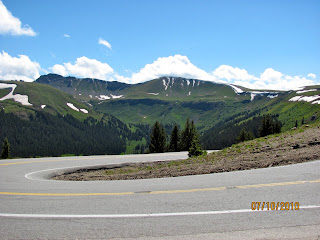 We stopped on the way up for pictures. This part of the country is just gorgeous. I got Joyce to pose at a stop across from the switchback above.  There was a steep drop off behind her and she didn't like standing near the edge! 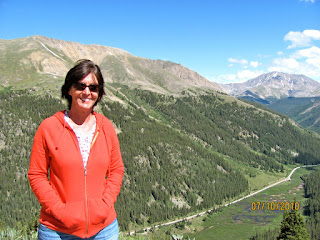 Another 1/2 mile and we were at the summit. 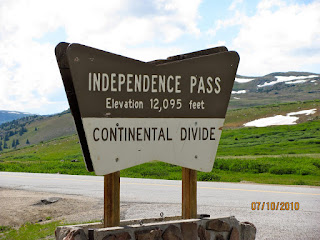 Independence Pass (el. 3686 m./12,095 ft.) is a high mountain pass in the Rocky Mountains of central Colorado in the United States.
The pass is at the summit of the ridge of the Sawatch Range between Aspen and Leadville, on the border between Pitkin and Lake counties and is located within the confines of the White River National Forest. The pass connects the upper valley of the Roaring Fork River upstream from Aspen with the headwaters of the Arkansas River near Leadville. The pass is traversed by State Highway 82 and is the second-highest paved mountain pass in Colorado. The top of the pass is well above the tree line and the terrain type at the top is tundra. Its narrow road provides for slow cautious navigation on its approaches. The approach on either side is a steady but steep 6.5%. Several switchbacks on each side of the pass make careful planning a must. Truckers and other large vehicles are not allowed to use the road, though large RVs can make it with careful planning. The pass is always closed in winter, from the first heavy snow fall in autumn, often opening only in late May. 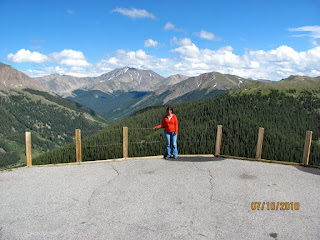 Independence Pass has some of Colorado's finest alpine views. Located on the Continental Divide at an elevation of 12095 feet above sea level (N39deg 06'32" & W106deg33'50"). State Route 82 runs over the Pass from Twin Lakes in the East to Aspen in the West.
Snow and Ice along the edge of the mountain. 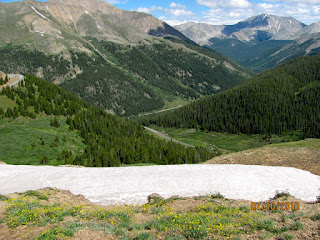 Before long we had to head back down the pass. 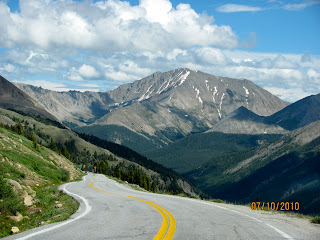 We were careful on the way back down. The side of this part of the road has a steep drop-off. No Shoulders here! 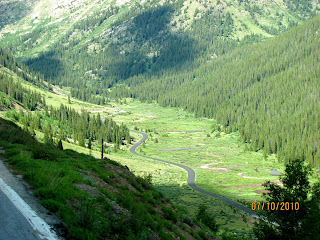 Back home we relaxed and enjoyed a nice spaghetti dinner. We were both tired after driving over 100 miles today. It was a worth the trip as this was one of the most beautiful drives to date.
Posted by Darren and Joyce Romero at 8:28 PM