July 30, 2010.
The day started off a bit overcast, which may have caused us to sleep in a little too late! Undecided about what to do today, I talked with the park owner. He's a deputy sheriff for San Juan County. He suggested that we take a scenic drive over The Abajo Mountains.
It was about noon by the time we were ready to go anywhere. We drove into town and followed the directions I was given to Abajo Drive. Although the steep climb over the mountains is paved, we decided to venture off-road for a while...because we can! 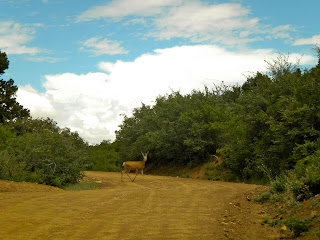 We saw several deer along the dirt roads. The vistas were spectacular. 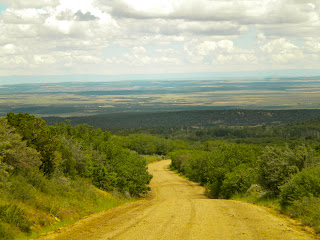 The Abajo Mountains, also called the Blue Mountains, are a small mountain range west of Monticello, Utah, south of Canyonlands National Park and north of Blanding, Utah. The mountain range is located within the Manti-La Sal National Forest. The highest peak within the range is Abajo Peak at 11,360 feet (3,463 m)
We only climbed to about 8500 ft. but we could see Canyon Lands in the distance. 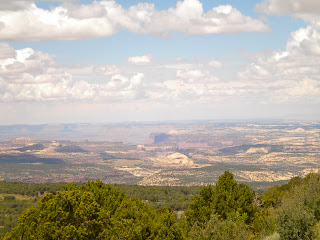 After descending down the mountain on the opposite side, we discovered we were only 20 miles from Canyonlands National Park so, we decided to drive over to the park. The first stop along the way was a historic site known as Newspaper Rock. (Click on the picture below to expand the picture and read about the history). 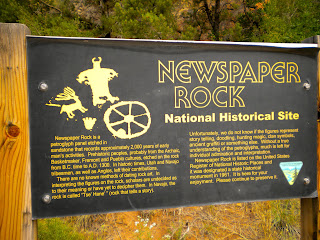 With only a 3 ft chain link fence around the border of the rock, we were able to walk right up to the petroglyphs. 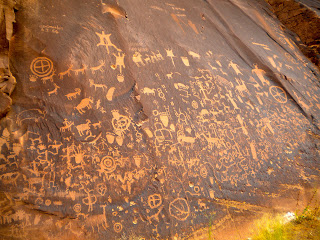 After viewing Newspaper Rock, we continued the long but breathtaking drive towards the entrance to Canyonlands National Park (Needles District). 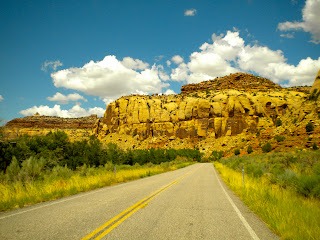 Canyonlands preserves an immense wilderness of rock at the heart of the Colorado Plateau. Water and gravity have been the prime architects of this land, cutting flat layers of sedimentary rock into hundreds of colorful canyons, mesas, buttes, fins, arches and spires. At center stage are two great canyons, those carved by the Green and Colorado rivers. Surround the rivers are vast and very different regions of the park: to the north, Island in the Sky; to the west, the Maze; and to the east, the Needles. The areas share a common primitive spirit and wild desert atmosphere. Each also offers its own special rewards. 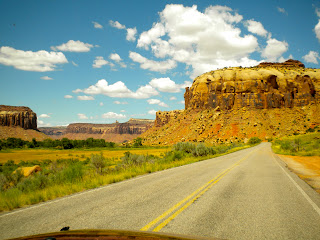 Few people were familiar with these remote lands and rivers when the park was established in 1964. Prehistoric Native Americans, cowboys, river explorers and uranium prospectors had dared to enter this rugged corner of south-eastern Utah, but few others did. To a large degree, Canyonlands remains untrammeled today. Its roads are mostly unpaved, its trails primitive, its rivers free-flowing. Throughout its 527 square miles roam desert bighorn sheep, coyotes and other animals native to this land. Canyonlands is wild America.
We were traveling in the Needles District. 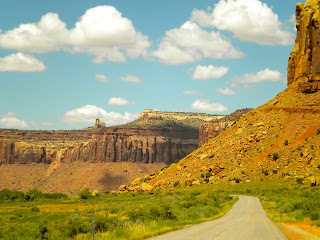 The rugged canyons of what is now Canyonlands National Park have witnessed many human events since the earliest Americans. The Paleo-Indians entered the region around 10,000 years ago. The tides of human occupation have ebbed and flowed in concert with the availability of and demand for the various resources the canyon country has to offer.
The first people known to inhabit Canyonlands were the Archaic hunter-gatherers, wandered the area 2,000 to 10,000 years ago in search of large game animals and edible plants. They who lived in the open or camped under overhangs, leaving behind such artifacts as projectile points, atlatls or spear throwers, fire hearths, and ghost-like pictographs. 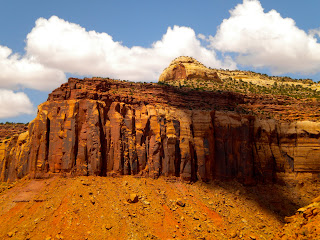 Most cliffs of canyonlands show classic profiles which can be seen throughout the southwest. Some of Canyonlands' rocks are massive layers of uniform sand which have become cemented. They are the cliff formers such as the Wingate and Cedar Mesa Sandstones. Gravity is an important partner, contributing to erosion as much as the infrequent rains. The softer, underlying rock layers erode more quickly. This undercuts the harder upper layers and they break off in huge slabs. Sometimes they form beautiful arched alcoves and, more frequently, the falling rock leaves vertical cliffs. 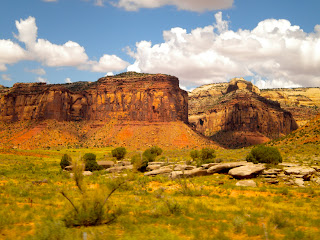 Canyonlands is located within a geologic region called the Colorado Plateau. It is a great section of continental crust that has endured millions of years of rock building and erosion.
Advancing and retreating oceans left thick deposits of beach sands and marine limestones. Great river systems moved tons of sediment from ancient eroding mountain ranges such as the Ancestral Rockies (forerunners of today's Rocky Mountains) and deposited that sediment in low-lying areas. Buried sediment became solid rock as pressure from overlying layers and filtering water cemented them.
After millions of years of predominantly rock-building processes, the erosion that continues today began. Roughly 10 million years ago, plates in the Earth's crust moved in such a way that the western edge of the continent began to rise. The slowly rising land mass, including the Colorado Plateau, became higher and therefore more susceptible to erosion Newly elevated highlands captured rain and snowfall and gave birth to the Colorado River system. The uplifting land caused rivers to down-cut more rapidly, entrenching themselves in solid rock. The results are the 2,000 foot deep canyons of the Colorado and Green Rivers cutting through the heart of Canyonlands. 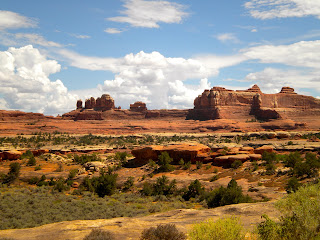 The origins of the thousands of small canyons found in the area may be puzzling at first glance. Most of the year, time seems to stand still and the process of erosion is imperceptible. To witness the occasional rock fall or landslide is exceptional luck. But some of the erosive processes are sudden and violent. Sparse vegetation and an abundance of exposed rock make Canyonlands especially vulnerable to flash flooding. Thunderstorms drop huge amounts of rain locally. With little soil and vegetation to hold the water, runoff is fast. It quickly collects in gullies and small washes, magnifying its power as water funnels into the canyons. The erosive power of the debris and sediment-laden water is tremendous. Flash floods are continually scouring and deepening the canyons. 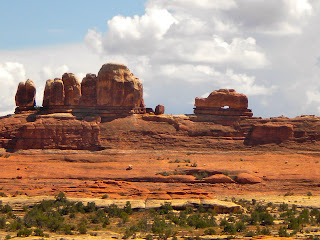 It was hot in the Canyon Lands during our visit with temperatures in the mid 90's. Usually not bad but with the monsoon season in full bloom it was also a bit humid...though not Florida humid! We did a little hiking around the overlooks and were in awe of the deafening silence. You know that quiet ringing you get in your ears when there's nothing to hear...awesome! The rocks themselves have a sandpaper texture to them making them very grippy and easy to walk on.
As we left the park, we discussed our original plan to return and do some longer hikes. Ultimately we decided against returning due to the long drive to get there (close to 100 miles round trip) coupled with the heat. We felt we had captured the essence of the park and returning this trip wasn't something we both wanted to do. However, I would highly recommend a visit if you are in the area.
Posted by Darren and Joyce Romero at 4:25 PM