June 30, 2010.
Today was a travel day to The United States Air Force Academy in Colorado Springs. It was a beautiful morning, cool and perfect for traveling. We were packed up and ready to leave Pleasant Valley RV Park by 10:00.
Well some have said, “It’s not if, but when...” While backing up to the fifth wheel king pin, I hit the king pin with my tailgate that was down (at least it was down and not up). My heart sank after realizing what I had done! I put a pretty good dent in the top of the tailgate. I deviated from my routine which probably contributed to the accident. Usually I lift the front of the fifth wheel before backing up to it. I had meant to just get close but got distracted by a tree next to me as I was backing. Our site slopes from the front to the rear, thus in a level position the front and kingpin where unusually low. Damage done, I still had to take care of business and get hitched.
It was going to be a bit of a struggle to get out of our campsite. We were all pretty close together, but my site was compounded by that large tree by my driver’s side door and the concrete slab on the passenger side that rises about 3 inches above the ground and is pointed. You can't see the tree but it's on the passenger side of the jeep. 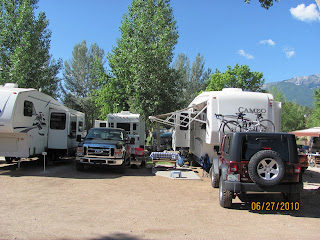 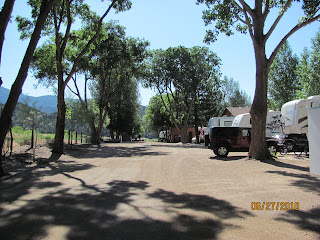 My concerns were:
I decided to go with the right turn and was assisted by Steve the campground owner. I couldn’t make the turn with out the end of the trailer hitting the tree. I ended up pulling out and then jack knifing the rig to get it backed onto the slab and then made a right turn. It sounds easy but it wasn’t. It took a few minutes and I was surely providing entertainment for everyone around!
We finally got on the road with Joyce following me in the Jeep. In turn she was followed by my father and Karen pulling their fifth wheel.

View Larger Map
It was a beautiful drive on Hwy. 50 along the Arkansas River in the Big Horn Sheep Canyon.  The road was curvy with some bling curves along the canyon walls. Before long we drove past the Royal Gorge but weren’t able to view it. We then took Colorado 115 with its steep rolling hills towards I-25 and Colorado Springs.
We arrived at the South Gate of the Air Force Academy around 1:00 and Joyce and I got passes to the base for our week long stay. Next stop was the Fam Camp. We were assigned sites 100 and 101. $25 a night for 6 nights. We quickly got set up in the shade of the pine trees. 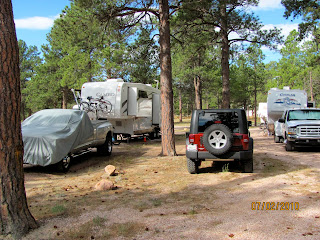 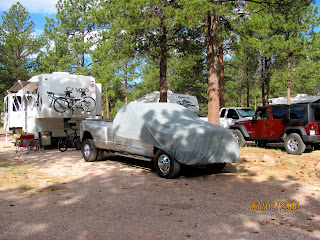 We have a nice corner lot. 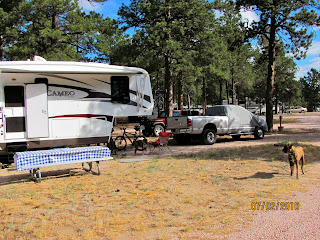 It’s a nice park in a forest of pines with gravel roads and sites. 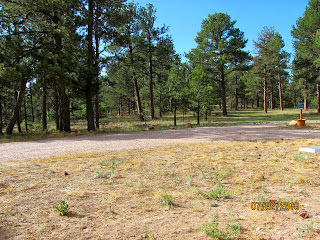 Some of the sites are far from level but our pull through site is not bad. The sites have full hook-ups and 30/ 50 amps.
We are the closest site to a very active railroad, complete with horn. Actually the train adds a certain charm! 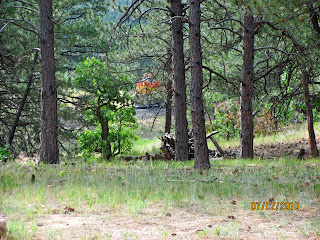 That afternoon, after getting set up, I took a hammer and some tools to the dent on my tail gate and pounded it out to where it’s not so noticeable. 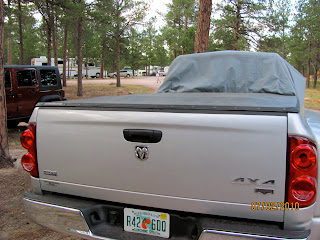 BUT I KNOW IT’S THERE! and I'l see it whenever I open the tail gate! 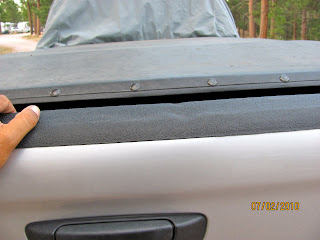 Posted by Darren and Joyce Romero at 9:49 PM