July 19, 2010.
Another warm day in Montrose with temperatures expected to reach 98 degrees in the city. We are a few miles south of town at about 6200 ft. a few hundred feet higher and away from the concrete of the city so it's not as warm in the campground.
We made a decision to stay here at Country Village RV Resort for another week. There's plenty to see and do in the area and we aren't in a rush to move on.
Montrose serves as the gateway to the Black Canyon of the Gunnison National Park to the east of town, and winter transportation hub to ski areas of the San Juan Mountains to the south. In 1909 the Gunnison Tunnel opened providing irrigation water from the Gunnison River in the Black Canyon to Uncompahgre Valley helping turn Montrose into an agricultural hub as well.
We took a trip out to the Black Canyon of the Gunnison National Park. It's about 50 miles round trip from our site. 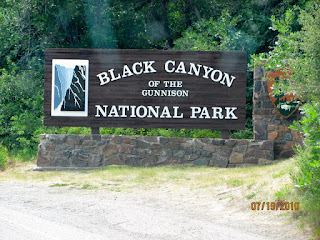 Most rivers of the Southwest cut through relatively soft sedimentary rock, forming canyons that tend to be quite wide, colorful and stepped - descending in a series of cliffs and ledges through layers of differing hardness. When rivers flow across harder igneous rock they produce steeper gorges, spectacular in different ways, such as Hell's Canyon in Idaho, the deepest in the US, or the multicolored Grand Canyon of the Yellowstone in Wyoming.

One of the steepest, darkest and most rugged of such canyons is formed by the Gunnison River as it flows through hard ancient rocks at the western edge of the Rocky Mountains, on its way to joining the Colorado river at Grand Junction.
A New National Park: On October 21st, 1999, Black Canyon was officially upgraded in status from a national monument and became the 55th national park in the US, and the third smallest. Entrance fees increased sharply on Jan 1st 2007, from $8 to $15 per vehicle.
We paid the $15 admission fee to the park which is good for a week. The park consists of two paved scenic drives along the north and south rims of the canyon and another paved drive down to the Gunnison River. There are several scenic overlooks along the rim drives. 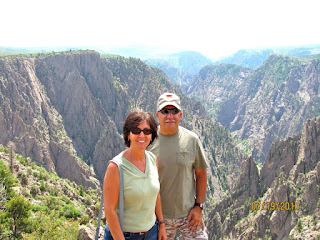 Below, this overlook is behind the small visitor center inside the park. 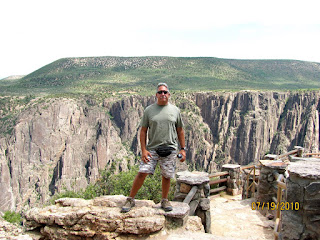 The canyon walls are composed of volcanic schist, predominantly black in color, and as the gorge reaches depths of over 2,000 feet while often being only 1,500 feet across, sunlight illuminates the walls only briefly, hence the name 'Black Canyon'. It is unsettling, almost frightening to stand at the very edge of one of the canyon overlooks, such is the menace and sheerness of the jagged rocks below. 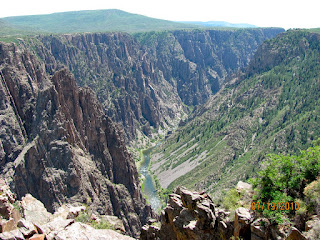 You can just make out the Gunnison River over Joyce's shoulder. 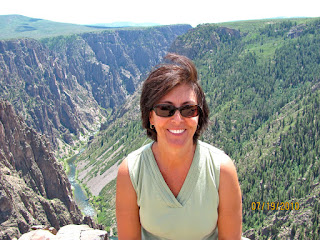 The canyon was originally over 50 miles long, but three dams have been built along the eastern (upstream) section flooding two thirds of the gorge - this is now part of theCurecanti National Recreation Area (NRA) which offers many recreational opportunities based around the artificial lakes. Only the lower 13 miles of the canyon remain unspoilt but this includes the deepest and most scenic section. 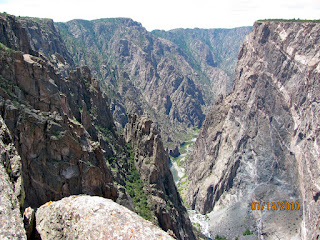 We traveled the 8 miles along the South rim getting out at the many view points. Most of the view points required short hikes of a few hundred yards back and forth so it got to be a little tiring towards the end at an altitude of 8500 ft. coupled with the hot weather. Admittedly it also gets to be a little repetitive looking into a canyon but, that didn't stop me from giving Joyce grief for not getting out of the Jeep at the last stop! 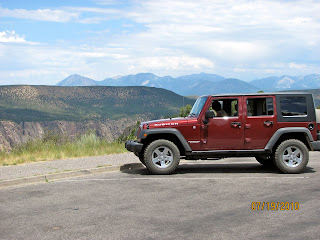 With our pass good for the week, we made tentative plans to return and hike at least one of the designated trails in the park.
Posted by Darren and Joyce Romero at 7:48 AM