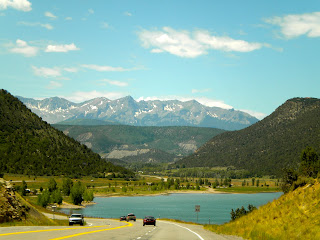 Upon entering Ouray, Highway 550 hugs the canyon wall along the Uncompahgre River, a tributary of the Gunnison River. Once in the town proper, I was immediately struck by the enormity of the canyon like mountains enveloping the small town.
The historic City of Ouray (pronounced /ˈjʊəreɪ/) is a Home Rule Municipality that is the county seat and the most populous city of Ouray County, Colorado, United States.[5] The city population was 813 at the U.S. Census 2000.[5] The Ouray Post Office has the ZIP Code 81427. 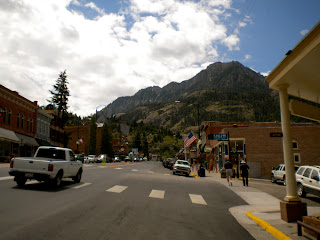 The roads are pitched and sometimes steep and the buildings are set at angles to compensate. 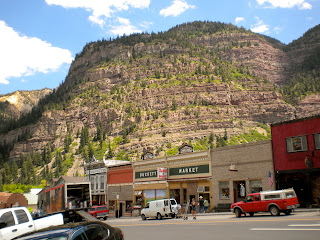 With the exception of Main Street (Highway 550) very few of the roads in town are paved. 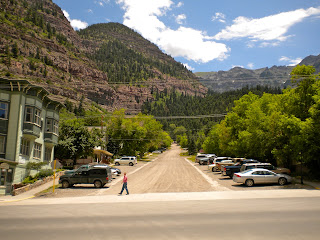 Ouray is located at 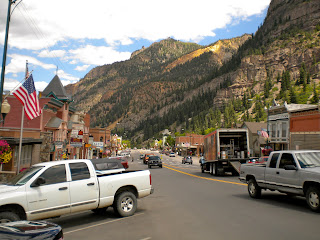 Originally established by miners chasing silver and gold in the surrounding mountains, the town at one time boasted more horses and mules than people. Prospectors arrived in the area in 1875. At the height of the mining, Ouray had more than 30 active mines. The town -- after changing its name and that of the county it was in several times -- was incorporated on October 2, 1876, named after Chief Ouray of the Utes, a Native American tribe. By 1877 Ouray had grown to over 1,000 in population and was named county seat of the newly formed Ouray County on March 8, 1877. 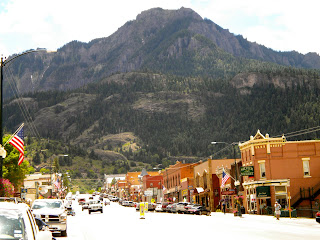 The entirety of Main St. is registered as a National Historic District with most of the buildings dating back to the late nineteenth century. The Beaumont Hotel and the Ouray City Hall and Walsh Library are listed on the National Register of Historic Places individually, while the Ouray County Courthouse, St. Elmo Hotel, St. Joseph's Miners' Hospital (currently housing the Ouray County Historical Society and Museum), Western Hotel, and Wright's Opera House are included in the historic district.
We had a good lunch at this restaurant/Deli. 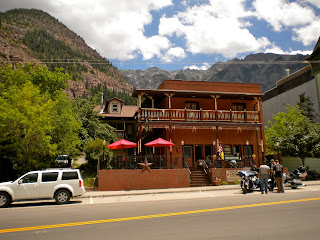 After walking around town we walked to the only campground in town, 4J +1+! RV Park and Campground. It is right on the river two blocks from main street nestled in the canyon with striking views of the high canyon walls. I called it "beautiful", Joyce called it a gravel parking lot! Admittedly the sites are tight but it's right in town! And I loved the canyon walls and the cool air around the river. Unfortunately they are booked through August with only a day or two available.
After we left town we took a dirt road out paralleling Highway 550 for a few miles. We decided that tomorrow we would take an "easy off-road" trail on the way to Telluride. This area is known as the Jeep capital of the country because of all the off-road jeep trails that were once roads for mines. We intend to explore some of these trails during our stay here.
Posted by Darren and Joyce Romero at 9:07 AM