Joyce and I have had the opportunity to visit the Nelson area of Lake Mead National Recreation Area on several occasions while doing our volunteer work on the back country roads.
This area is full of old closed mines and some operational mines as well as some spectacular scenery. It's several miles south of Boulder City on Highway 95 with a well marked exit for Nelson. It's a long steep downhill on the paved road past the town and down to Lake Mohave via Eldorado Canyon. 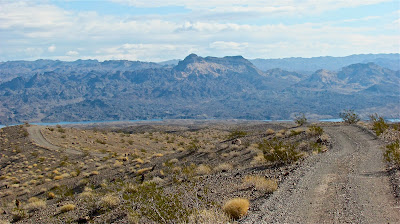 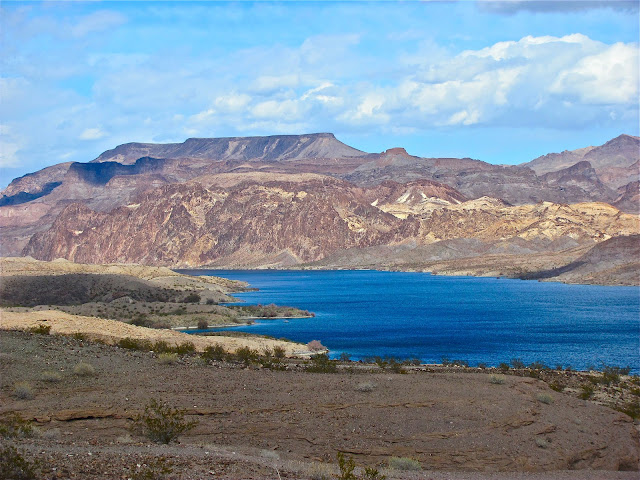 From Wikipedia:
Nelson is an unincorporated community in Clark County, Nevada, United States, in the Las Vegas metropolitan area. The community is in the Pacific Standard Time zone. The location of Nelson is in El Dorado Canyon, Eldorado Mountains. The town is in the southeast region of the Eldorado Valley.
Nelson is on the Nevada side of the Colorado River about 16 miles (26 km) north of Cottonwood Cove, Nevada by water.  Nelson is about 25 miles from Boulder City by road. One of the biggest mining booms in state history occurred near here, in the El Dorado Canyon. Gold and silver were discovered here around 1859.
In its heyday, the area established a reputation for being rough and lawless. During the American Civil War, deserters from both the Union and Confederate armies would wander there, hoping that such an isolated location would be the last place military authorities would look for them.
Nelson's Landing, about five miles west in Eldorado Canyon, is noted for washing into Lake Mohave in 1974 after a strong downpour in the regional mountains sent the runoff down the channels and produced a flash flood. There are five wide channels that run from the local mountains toward the river. The problem is that they all converge into a small outlet where Nelson's Landing was. The entire landing and village was destroyed and nine people died when the flood came through the wash. The wall of water and debris was reported as about 40 feet (12 meters) high as it reached the river.


And from the web:

Flash floods, the bane of campers and hikers in the Southwest, can strike with no warning. On September 14, 1974, a distant thunderstorm sent a wall of water 40 feet high roaring down Eldorado Canyon. The flash flood killed nine people and wiped out Nelson's Landing, a popular fishing marina on Lake Mohave about 35 miles southeast of Las Vegas.The normally dry canyon turned deadly after an intense hail and rainstorm dumped three inches of rain in just 30 minutes in the mountains up-canyon. The muddy torrent crushed the restaurant, grocery store, and bar in about five seconds. Bernie Daniels, a tourist from Glendale, California, remembered, "Heavy hail fell for 15 minutes. Then there was a solid gush. It had to be 30 or 40 feet high."
Much of Nelson, which was not impacted by the 1974 flood, remains today and is located way up the wash, away from the flood channels. The sparsely populated community consists mainly of privately owned ranch houses, and a river and mining tour business housed in a former Texaco gas station that has been used as a filming location for several feature films, including 3000 Miles to Graceland.

The community was named for Charles Nelson, a prospector who was slain at his mine in 1897.


If you visiting near Boulder City, it's a nice drive out to Nelson and worth the visit for the views. There's no entry fee at this location for entering Lake Mead N.R.A. and visiting the site that once was Nelson Landing just down the road.

Posted by Darren and Joyce Romero at 8:39 PM