Brief Return to Where we Started and Tropical Storm Debbie

June 4 thru June 26, 2012 Palm Harbor, Florida.
So, after spending a month in St. Augustine, Fl at Stage Coach RV Park, we made a trip back to Pinellas County and Palm Harbor where we had lived and worked for the past 30 years. It was not a trip I wanted to make as I had no desire to return, at least not with the fifth wheel in tow. But, we had to go back to assist a relative with a medical issue. This was something that we had known about for the past 6 months and it was time to get it done.

View Larger Map
Although our first choice in campgrounds was Dunedin RV Resort, we decided on Sherwood Forest RV Park as the advertised rates were much lower. So after traveling the 200 miles, we got set up on the pond with some modest shade. The weather was cloudy and threatening to rain. 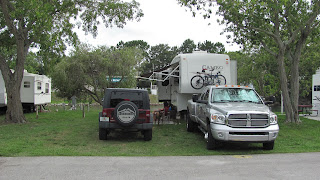 We paid $475 for a month not including electric. Well, we discovered that not only did Sherwood Forest have lower advertised rates but they had lower voltage. After plugging in and cranking up the air-conditioner, it was apparent that the voltage was low! We contacted the office and they sent out the resident electrician who readily advised that, "yea there's a low voltage problem in the park".
The electrician checked the voltage at our power pole and read 108 and 112 on the two legs connected to the 50 amp outlet but declared it acceptable and advising that no one else has had a reported problem. Again at the time he checked it was relatively cool and cloudy. Not everyone was running their air-conditioners.
Fortunately the next two days were wet and cloudy and I only ran one air-conditioner.  However after some research and constant concern, I decided that we were going to have to move as my attention was constantly on that voltmeter and I was concerned over the possible damage to appliances including the main air-conditioner from the low voltage. Our Progressive Industries Surge Protector was at the verge of shutting off power to the rig as it is designed to do that when the voltage drops to 102 volts.
I drove over to Dunedin RV Resort to check availability and was prepared to pay the advertised $699 plus electric for a standard back in site. While getting a tour of the campground, I was told they had a special of $299 for the month and was shown the sites available for that rate in the back portion of the park.  I didn't care for those sites as they were backed in back to back with just a slab and crushed shell. I was surprised when they then offered us a premium back-in fully concrete site for the same price. I jumped on it and picked a shady site 24. It appeared that the park wasn't busy and most of the traveling RV'ers chose the premium pull-thru sites so I had my pick of almost any of the back-ins. Because it's a "resort" it had a nice club house and a beautiful pool which would be nice when my nephews came to visit.
After getting settled at Dunedin RV Resort and realizing they had strong voltage we were better prepared to take care of the family business and also enjoy our former stomping grounds to include Clearwater Beach. Sherwood Forest provided us with a refund and charged us $70 for the two nights we stayed. 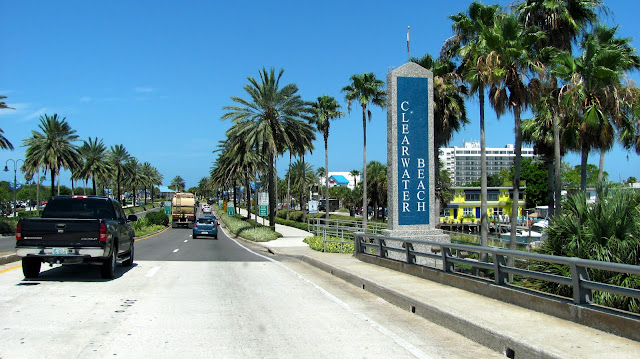 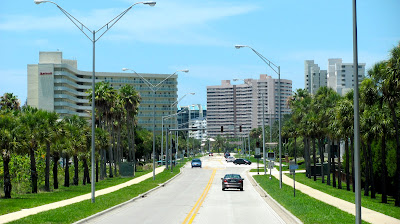 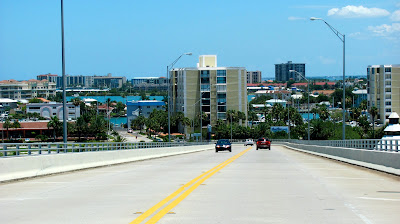 We enjoyed catching up with some friends and going out to dinner at almost all of our favorite restaurants. One of our friends invited us over for dinner several times and I enjoyed it each time as they are both fabulous cooks.
While we were in Pinellas County we got an un-welcomed visit by Tropical Storm Debbie that lingered for several days off the coast. 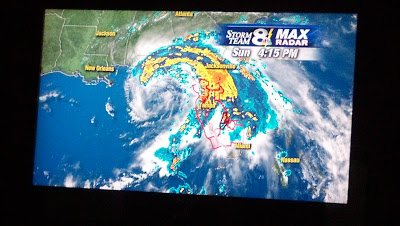 Slowly drifting North, Tropical Storm Debbie dumped over 10 inches of rain on us over the course of a few days. As the rain continued to fall, I moved our vehicles to higher ground near the club house. 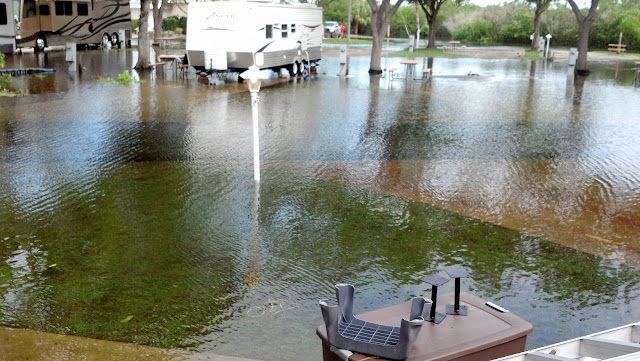 The heavy constant rains resulted in flooding throughout the County and including our park. These shots were taken out our front door. We were on an elevated concrete slab and only had about 4 inches outside our door. However off the slab and into the street it was a solid 14 inches.  You can only imagine how much fun it was to walk two full size Boxers to higher ground and get them in and out of the rig! Of course they enjoyed splashing and getting as wet as possible! After a couple of days of flooding many of the few remaining guests had departed opening up a few sites that were like islands surrounded by the water. I moved our rig to one of those sites until the water finally receded after several days. 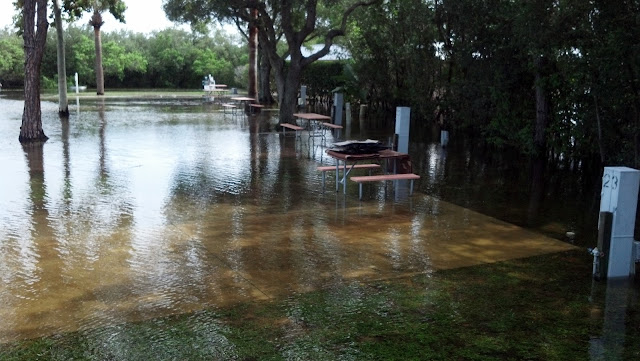 But it wasn't over yet! We still had to get back to the Jacksonville/ St. Augustine area and T.S. Debbie also decided to head that way depositing 15 inches of rain in Jacksonville. We stayed a day longer than we had planned as we waited out the storm before traveling back. The campground staff was very helpful and in fact most live in the campground and experienced the same issues. Upon checking out we were not charged for our electric use. We will be back at this campground if and when we return to the area.
Currently we are back in site 7 at Stage Coach RV Park. Prepared to continue working on improvements at our daughter and Son-in-Law's new home (i.e. painting, shelves, dimmers, yard work, etc.)  while he is deployed.

Posted by Darren and Joyce Romero at 7:57 AM