In September, after successfully camping at our rented home and at George and Bonnie's ranch, we decided to camp at a local Pinellas County Park, Fort Desoto Park.  This would be our maiden voyage to a real campground! 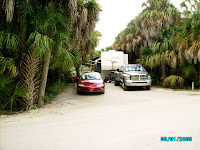 Our site was on the water, albeit more like a lagoon area in the back and canal in the front.  There were no sewer hook-ups, but it did have 50 amp electric.  Our site was large and contained an above ground grill.   All in all it's a beautiful park and campground.  However, getting a reservation is often difficult and pricey at $40 per night! 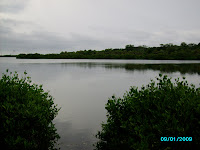 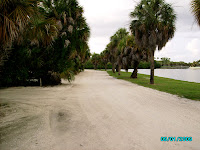 View of the front of the site which was an oyster laden canal.

To the right is a view out the back of our site, a shallow lagoon.


Our experience in this park cemented our desire to get on the road and begin the full time RV lifestyle.

Posted by Darren and Joyce Romero at 5:35 PM

Email ThisBlogThis!Share to TwitterShare to FacebookShare to Pinterest
Labels: Campsites