Please follow along as I attempt to bring this blog up to date. 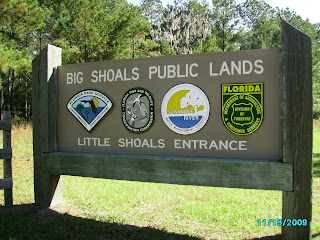 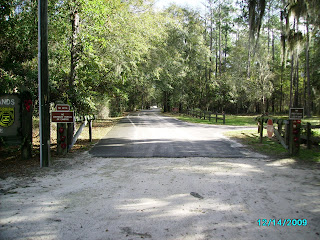 November 7, 2009.  We arrived at our site at Big Shoals and Little Shoals State Park and after driving down the mile and a half dirt road to the entrance, we quickly set up our rig on the concrete slab.  I had spoken with Ranger Dylan Shoemaker days earlier and was told that he and Ranger Gary Erixston would be in training the day of our arrival. 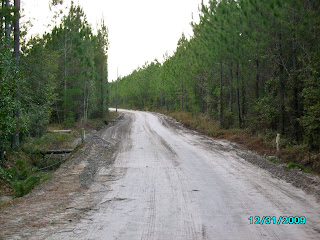 Joyce and I had visited Big Shoals briefly on Sept. 28th.  Our first impression back then was that we would be in a forest with lots of tree canopy and a canoe/ kayak launch on the Suwannee River, the park itself appeared small.  At the time we didn’t realize just how large the park really is as it also connects to Little Shoals.

After setting up, we quickly discovered that the forest canopy really made the inside of our rig dark as sunlight was filtered, that coupled with our dark cherry cabinets (we could live with that).  We also discovered that with only our antennae, TV reception was very weak and the handful of channels we received didn’t offer news or weather (not sure how long we could live with that).  What initially concerned us was a tropical depression brewing in the gulf and expected to move in our direction and we had nothing but the radio out in the middle of nowhere to keep us informed.

That night we met Ranger Dylan Shoemaker and we immediately established a good rapport.  Dylan would be our closest neighbor as his state owned mobile home is located just inside the entrance to the park.  We learned that Dylan also did not have TV reception. Many of the pine trees in the park/ forest were dead and dying from beetle infestation.  I had become concerned our first day that there appeared to be several dead/ dying large pine trees around our rig.  I pointed out my concerns to Dylan and he immediately made plans to cut down the trees the next day.  That night we noticed just how very dark it gets in the forest.  Aside from our rig, there are no other sources of light visible around us.  Certainly a new experience for us urbanites!  50 ft. from the rig you couldn’t see your outstretched hand on a cloudy night.  However, in the following weeks, we adjusted to the darkness and the noises from the forest and its creatures.

November 8, 2009.  Dylan and Gary arrived at our site bright and early as planned.  Gary whom we met for the first time was also very accommodating and friendly.  He is the senior ranger with 30 yrs. of service with most of that time spent at Stephen Foster State Park and Big Shoals State Park.  Dylan had recently been assigned to Big Shoals State Park from Homossa State Park in February of this year.

I backed our rig out of the RV site and Dylan and Gary began cutting down the dead pine trees, about 7 total.  The trees which were upwards of 40-50 ft were left scattered where they fell or pushed into the woods.  We were told we could burn whatever we wanted in our fire pit. We later made contingency plans for the threatening tropical storm if it made its way toward us.  Basically the plan would be for us to pull out before the storm got too close as it may not be safe in the heavily wooded area.  Thankfully, the storm weakened and slowed and didn’t pose a threat to us. 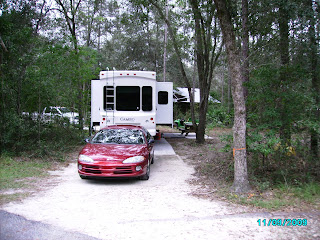 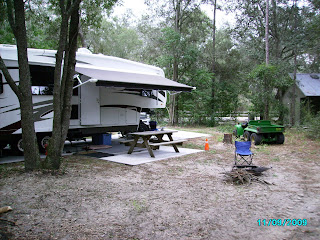 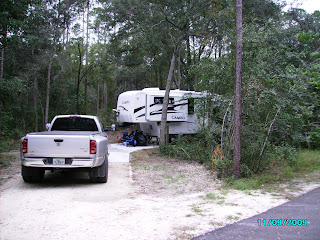 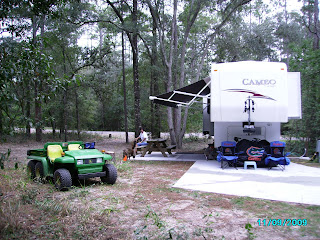 The next few days were spent getting to know the area and our duties.  Stephan Foster Folk Cultural Center State Park is the administrative headquarters for both Big and Little Shoals parks.  It’s located in White Springs, Fl just a few miles north.  With the upcoming holiday season and events in Stephen Foster, Dylan and Gary would be spending the majority of their time at Stephen Foster.  White Springs is the closest town.  It’s very quaint with old historic homes and small shops.  We only discovered three small restaurants and no large grocery stores.  The closest large shopping districts (Walmart) were in Lake City, Fl. and Live Oak, Fl. both of which are 30- 45 mins. away. 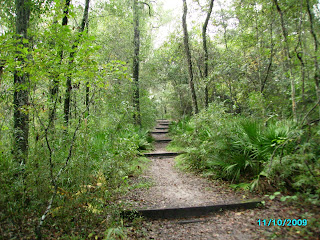 Trail leading a short distance from our site leading down to the Canoe/ Kayak launch and Long Branch Trail. 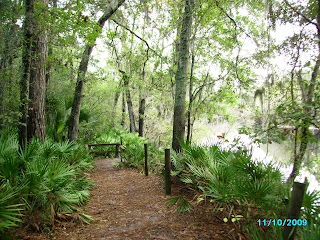 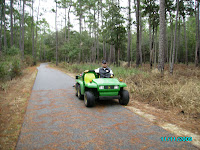 Our duties included cleaning and stocking the restroom facilities building at Big Shoals, the two Clivus Multrans (recycling outhouses) one at Little Shoals and one deep in the park.  Our other duties include blowing off debris from the Big Shoals loop and entrance, and the paved 3.5 mile Woodpecker Trail (for pedestrians and bikes) that cuts through the forest connecting Big and Little Shoals parks.  In addition we would help to maintain the 27 miles of hiking, biking, off road and pedestrian dirt roads and trails throughout the park.  Moreover, we would greet and assist visitors if and when we came into contact.  Traveling back and forth from Big Shoals to Little Shoals via the Wood Pecker trail and dirt road (Road 1) and to the Clivus Multran and picnic facility in the forest  is about a 10 mile adventure.  The Rangers provided us with a John Deere Gator to use in the park.  The park is very diverse with areas for equestrians and shared trails for bikers and hikers, some of which follow the forested banks of the Suwannee River and/ or have small streams crossing them. Throughout our initial days we saw lots of large deer armadillos, squirrels, birds and snakes.

On the map below, our site is on the small black dotted loop just north of #177. 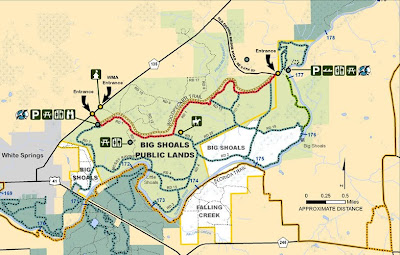 The park is very diverse with areas for equestrians and shared trails for bikers and hikers, some of which follow the forested banks of the Suwannee River and/ or have small streams crossing them. Throughout our initial days we saw lots of large deer armadillos, squirrels, birds and snakes.

To resolve our news and entertainment issues, we (Joyce) contacted Dish Network and we ended up purchasing a satellite receiver/DVR and dish.  We also purchased month to month service. The installer was surprised he could get a signal through all the trees.  In previous campgrounds we either had cable service provided or the digital over the air signal was sufficient.

Posted by Darren and Joyce Romero at 3:06 PM