Jan 1, 2010.  Happy New Year and wishes for a Prosperous New Year!  We woke up today to 55 degrees and cloudy drizzly skies.

Jan. 31, 2010.  We stayed in the park except for a quick excursion to a historic hotel in White Springs for lunch at the Telford Hotel.  They had a buffet for $6.50. The price was very good but the buffet itself was average.  Although the building is historic and interesting, it’s in serious need of a makeover.  Established in 1903, rooms are still available for rent, but I wouldn’t want one! 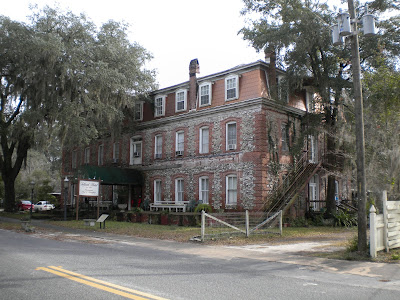 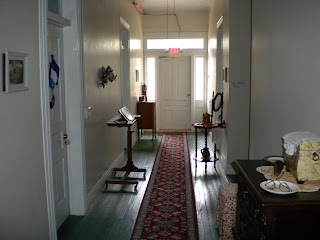 Hallway leading to the upstairs rooms. 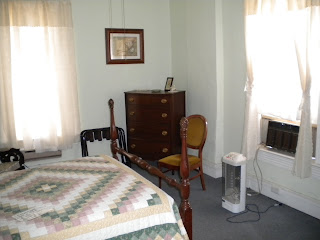 One of the rooms for rent

Last night, temps were in the 60’s in the early evening and we had the door open with only the screen door closed to the rig.  Our female boxer, Maggie kept alerting to the door and initially I ignored her as our male boxer Rico didn’t seem concerned.  Finally I relented and went to step outside and see if anything was out there.  We had a full “Blue Moon” for New Year’s Eve.  Maggie uncharacteristically pushed past me and jumped the stairs to get outside.  She then began sniffing across the site and behind a woodpile at the edge of the woods.  Suddenly something bolted into the woods with Maggie in hot pursuit.  I couldn’t see what it was, but I’m guessing a wild hog, raccoon or armadillo.  I don’t know because it took off so fast.  Maggie chased for a few yards and then ran back to the rig. 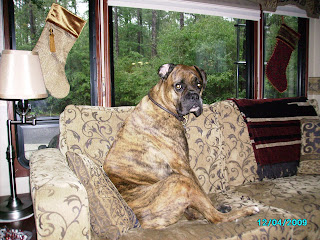 I haven’t written much about our dogs.  Rico is 82 lbs. and will be 5 years old in a couple of days and Maggie is 55lbs and 6. 5 years old.  They are both very spoiled and have adapted remarkably well.   Rico has always had issues with slippery tile floors, narrow spaces and stairs.  Maggie has always been the most athletic of the two with no confidence issues.  I was concerned that Rico might have difficulty adjusting to our new lifestyle.  Surprisingly he has adapted very well with his “issues” diminishing.  Rico still won’t climb the steps into the rig on his own.  He climbs the first two steps with his front legs and then waits for someone to lift his rear legs on to the first step at which time he continues the climb.   Bizarre for sure, but it works.  When he exits the rig, he reaches down to the first step and then leaps out.  Maggie climbs up and down in a more natural fashion. 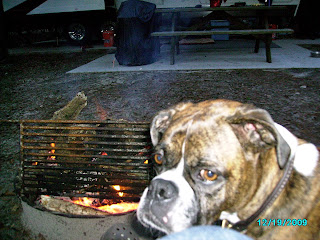 Now Maggie, has always had some separation anxiety.  When we lived in a stick and brick house, Maggie had a metal crate that was her little den.  They were both crate trained as puppies however, Maggie continued to use her crate even after we discontinued locking them inside when we left the house.  Rico never cared for the crate but Maggie would use hers everyday.  In fact she would get into it whenever she sensed we would be leaving them alone.  After leaving them alone in the rig awhile back, we noticed that some of the windows had nose prints and saliva on them. It was apparent that Maggie was having separation issues.  Ultimately we ended up buying her a soft canvas crate that now occupies a portion of our dining table space.  This seems to have resolved her issues. 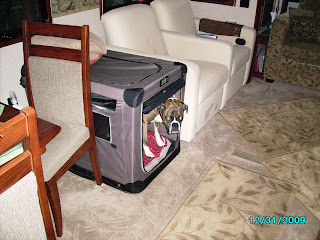 Maggie and Rico thoroughly enjoy traveling in our truck as they are always eager to get into it, which requires that I lift them. 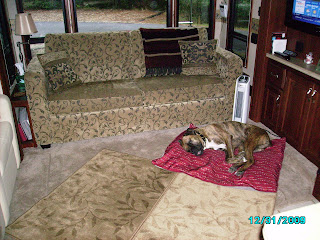 We love them but they both are eating us out of house and home!  Thankfully neither one of them are destructive or barkers.  They have plenty of licks and boxer wiggles for anyone that visits.

Posted by Darren and Joyce Romero at 10:34 AM