Controlled Burn and Road 2 in the Big Shoals Public Lands

January 11, 2009.  We awoke to 22 degrees.  The plastic wrap and high watt lamp worked as our outside water connection didn’t freeze.  However there was a thin layer of ice in the park's bathroom toilets.  I had put wood stakes in the toilet bowls to combat a hard freeze. 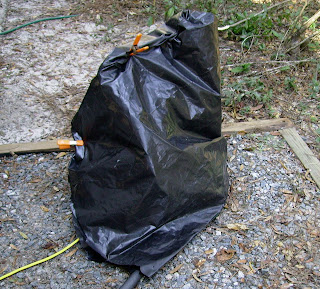 Due to the cold, we got  a late morning start on our park chores.  After cleaning up around Big Shoals State Park we noticed smoke in the forest.  We decided to take the long way around through the forest to get to Little Shoals so we took road 2.  Now road 2 is only partially opened to the public, because it’s often not navigable due to large mud holes the width of the road and very loose sand.  Although muddy, the holes were not full of water and we were able to get through in 4wd on the John Deere Gator. 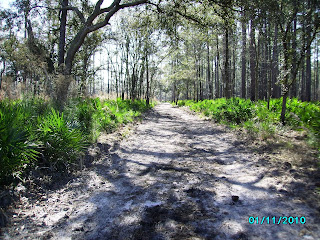 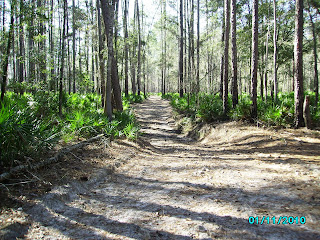 This past December, a couple out for a ride in their jeep on Road 2 broke down and in fact got lost in the pitch black darkness of the forest at night.  They ended up spending the night on palmetto fronds as they had wandered away from the jeep and weren’t able to find it again that night.  The couple either didn’t have a cell phone or couldn’t get a signal.

The next morning the man left his wife on the palm fronds as she was no longer ambulatory and began walking out of the forest until he came upon Ranger Gary Erixton’s house.  Gary was off-duty and not home, but Gary’s wife called the ranger station.  Ranger Dylan Shoemaker and I responded to the area and we ended up going back into the forest with the Gator to find the woman who was suffering from hyperthermia.  We moved them to the park entrance.  The local paramedic responded to the park and they were both checked out but refused further treatment.  Dylan and I later found the jeep on Road 2 and towed it with the Gator to the park entrance. 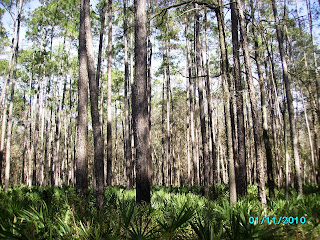 The point is that you can get lost and/ or stuck in the forest which is why some of the roads are closed off with cable gates.  We have keys to all the gates and maps.  We are encouraged to explore and keep the roads and trails clear of fallen branches and trees.  However, on this occasion we were searching for the source of the smoke all the while suspecting it was a controlled burn as we had seen other burns outside of the area.  We took a short detour to the river’s edge discovering this small secluded beach. 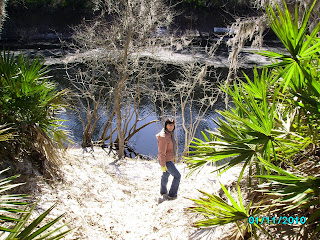 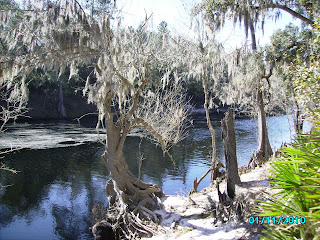 We ended up back on Road 1 and noticed the smoke was coming from the west side of the the Wood Pecker Trail.  We traveled to that area and discovered Division of Forestry Officers were conducting a controlled burn.  Our Rangers were unaware of the scheduled burn until we told them.  We took a few pictures including the two below from the Wood Pecker Trail which as you recall is the paved bike trail.  It was still open to the public and no effort was being made to route people away from the burn.  It's hard to see the open flames in the pictures. 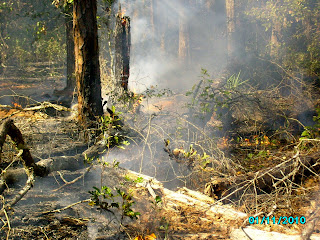 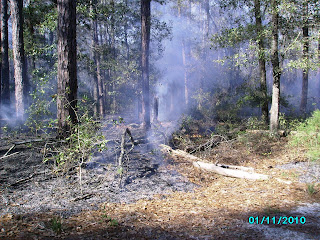 Later back at our rig, we endured the increasing smoke and ash outside that finally settled after dark.  As it was still cold and now smokey outside, I took advantage of the time to take an afternoon nap!

Posted by Darren and Joyce Romero at 9:26 AM