January 5th, 2010. We again awoke to 35 degrees and sunny skies.  It was too cold to get an early start at anything so we lingered inside till late morning.  Ranger Erixston had brought us some fresh bacon from his family’s farm.  So we fried the bacon with some eggs.  It had to be some of the best bacon we’ve ever had. 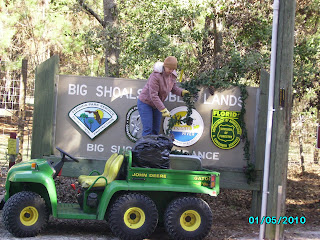 Later, I took the dogs on a long 3 mile walk just to warm up. When I returned Joyce was taking down Christmas decorations in Big Shoals State Park.  She didn’t finish as she had an appointment in Lake City.  I stayed home with the dogs and watched over the park.  We only had a handful of park visitors due to the cold.

With these extreme cold temps, we are using our large ceramic heater 15K watts in the living room and a small 7K watt ceramic heater in the bedroom.     I set the furnace to come on infrequently to keep the water tank and water lines in the basement from freezing.

I took some pictures throughout the park.  I thought the sun shining through the Spanish Moss in the Oak trees looked like the southern version of icicles.  It certainly felt cold enough to have icicles.  Although many people think the Spanish Moss is attractive, it's actually very debilitating to the trees.  It covers branches inhibiting the growth of leaves, and when it gets wet it adds additional weight to the branches often resulting in breaking the branches. 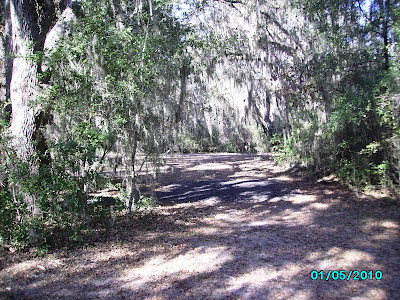 Posted by Darren and Joyce Romero at 7:25 AM