Because of the rain, we stayed at home in the rig working on our laptop computers and taking naps.  For internet service we use a Verizon MiFi card.  The MiFi card allows us both to be online on our individual laptops.  In fact, with the MiFi card you can use up to 5 computers or wireless devices such as an IPod Touch or wireless printer, both of which we also use.

Later when the rain let up a bit, we took Maggie and Rico out to run around in the park.  We were the only folks in the Big Shoals State Park and hadn’t seen anyone come through all day.  After they burned off some energy, we locked them inside our Cameo fifth wheel and we took my truck to the Lake City Publix to pick up a few things for the dinner party at Ranger Gary Erixton’s home.

Because of the rain, Godwin Bridge Road was pretty washed out in spots so I felt more comfortable with us taking the truck as opposed to Joyce’s car.  Hamilton County is usually pretty good about plowing the road within a couple of days.

When we got back, I walked down to the canoe launch noting that the river had risen about a foot since yesterday and it was flowing faster carrying leaves and limbs down river.  I took some pictures of the fog rising off the river. 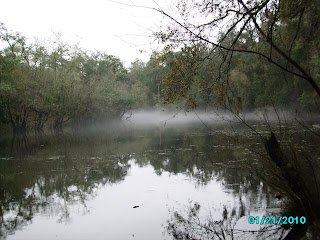 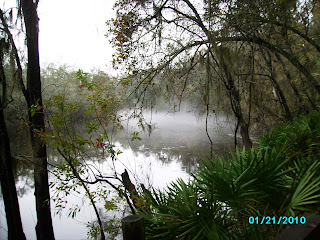 On the way over to Gary’s house we picked up Ranger Dylan Shoemaker.  Gary and his wife Kim had prepared a feast of catfish, pork steaks, lots of vegetables, sweet potatoes, mashed potatoes and home packed strawberries and pound cake for dessert.  It was all very good and we did a good job of cleaning our plates! 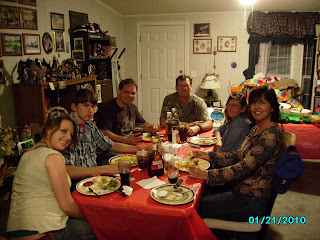 One of Gary’s hobbies is to collect local historic photos.  After dinner he showed us old pictures of White Springs at the turn of the 20th century.  It was amazing to see the old pictures and hear some of the stories behind the photos.

We all ate too much and had a good time.  Tomorrow will come early as we have our chores to do in the park after the heavy rain.  Saturday the Suwannee Bicycle Association Ididaride event is expected to roll though the park and Big Shoals Public Lands.  Unfortunately, I’m sure that a few of the trails and roads are going to be impassable on a bike due to the heavy rain.  We shall see.

Posted by Darren and Joyce Romero at 7:00 AM