January 8th, 2010.  We awoke to morning rain and temps in the mid 40’s.  After working on this blog, it was still damp and dreary out although it had stopped raining.  The temps seemed to be stuck in the upper 40’s.   We decided it was a good grocery shopping day.

First we stopped at The Corner Cafe for lunch, one of three  restaurants in White Springs.  (Refer to an earlier post on the Telford Hotel).  The Corner Cafe is Joyce’s favorite of the three.  We have yet to post on my favorite, Fat Belly’s!   Anyway, the Corner Cafe is an old two-story house that was converted to a first floor restaurant that seats about 20-30 people.  It doesn’t have a large menu, but the food is good if not average.  Joyce had the vegetable beef soup special and I had a burger and fries. 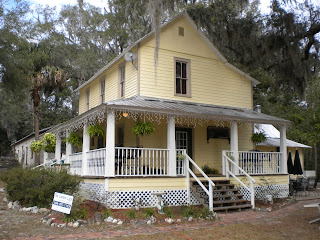 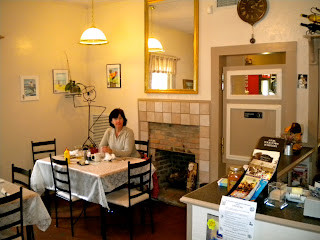 Once we finished lunch we drove to the Walmart in Live Oak for grocery shopping.  We also looked for life vests for our Sea Eagle 370 inflatable kayak that we bought each other for Christmas.  I believe you are suppose to be able to assemble and inflate the kayak with the included foot pump in about 20 mins.  It took me about an hour the first time. It should be much more seamless next time. 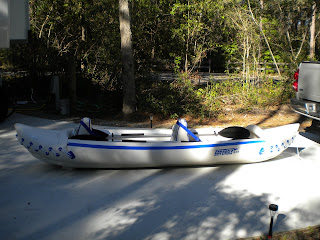 We launched it from our steep canoe launch and went up stream and down stream for about a mile each way. I'm told the Suwanne only flows at about 3-4 MPH in most spots.  We just wanted to get the feel of it.  We enjoyed the ride, but we would feel more comfortable with life vests.   I'm sure we are going to get a lot of use out of this boat.  Because it's inflatable, it's easy for us to store and transport. Since that first launch December 29th, the weather has been too cold or we’ve been too busy with other matters to try it out again.  However, we plan to do a longer day trip with Ranger Dylan Shoemaker before we leave in February.  We purchased the boat on-line from Inflatable Boats For Less.  Walmart didn’t have life vests in stock and I was told they are a “seasonal item”.  Thus, I’ll have to expand our search our buy vests from Inflatable Boats For Less. 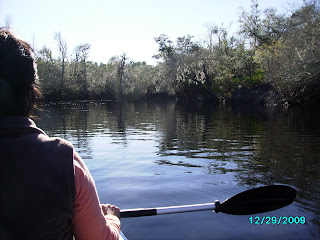 When we got home we did a few rounds in the park and I made our freeze preparations again.  Afterwards we stayed indoors as the temps were dropping and it was a damp cold.

Posted by Darren and Joyce Romero at 9:31 AM