January 12, 2009.  Another morning of subfreezing temperatures. However, the sun was shining and it was expected to reach the high 50’s.

Tuesday has generally been our laundry day and today was no exception.  We decided to stop at my favorite restaurant, Fat Belly’s one of only three restaurants in White Springs before proceeding to Stephan Foster Folk Culture Center.  It was busy inside with local patrons, so I didn’t want to disturb anyone by taking a picture inside. Nothing unusual inside just bench style tables and chairs and a long bar/ counter in the rear.  The menu is your basic grill sandwiches, salads and fried catfish. 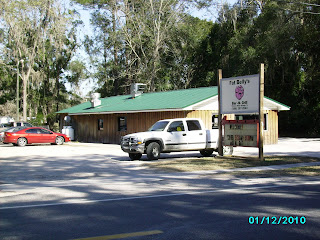 Later we did laundry in the bath houses/ laundry facilities at The Stephan Foster Folk Culture Center.  It sure felt nice to sit in the sun. 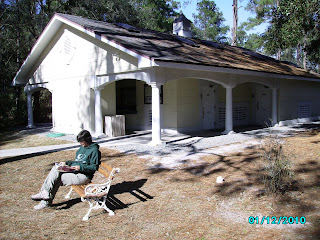 There were very few RV’s in the campground.  It's been that way for several weeks.  Of the handful of RV's in this part of the park, at least 4 of the rigs belong to volunteers. 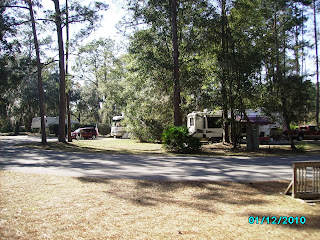 After doing the laundry, we traveled to Lake City and found life vests for use on our Sea Eagle 370.  We also went to a locksmith to have extra keys made for the front door of our Carriage Cameo.

Posted by Darren and Joyce Romero at 8:36 AM